Ok, now I'm curious. What do you see as the down side to Dvorak? He's currently a better producer than the player they lost, cheaper and you have him NOW and KNOW what you have versus a who-knows-what-you-get at the next draft... 1st or not.

Staff member
I mean he's decent, and maybe he does great in Montreal - but I don't think Montreal is a playoff team, and I think futures are more important than current day. 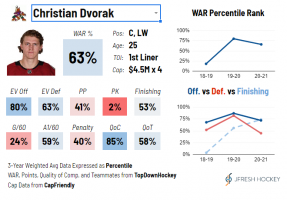 Yeeeah, you may have a more realistic view of the Habs than the Habs themselves.... They prefered to fill the hole with a trade than from within. We'll see how it pans out. Either way, it's exciting. I'm excited for this season. I was not excited for this last season and I wasn't excited when they shut down and then restarted due to covid. NOW I'm excited.

I think MTL screwed the pooch on the whole deal, they never should have let it get to the point where the offer sheet was signed. The essentially gave up a 20 year old that they recently made the #3 pick on the draft (and probably rushed to the NHL), then had to essentially trade away the compensation they received for him for Dvoroak in a desperation trade to fill in the center position .. who is a pretty solid player, but at this point in his career, he is who he is and MTL had to overpay for him. Earlier in the off season, Arizona would have been happy getting a 2nd or 3rd for him, but MTL put themselves into a corner.
You must log in or register to reply here.
Share:
Facebook Twitter Reddit Pinterest Tumblr WhatsApp Email Share Link
Top