Staff member
We’re starting to get some polling that seems closer to what the actual results will look like. Fox has Biden up 5 in PA, a couple +2 in FL (a +2 win for Biden in Florida would be huge frankly), Trump up 1 in Georgia, and a tie in Texas. It’s good for Biden in the states that matter, but I’m not sure it translates to a +10 win. Seems like Trump is closing the gap in the red leaning states, but the fact that he’s busy recovering ground there isn’t a good sign for him. Biden’s Path to 270 Widens, Trump’s Path Narrows, as Texas Moves to Toss Up

Less than a week out from Election Day and President Donald Trump is playing catch-up. In 2016, he won 30 states (and Maine's 2nd Congressional District) and their 306 electoral votes. Today, just 20 states, worth 125 electoral votes, are safely in his column. Former Vice President Joe Biden is...

Texas appears to actually be in play, especially with the incredible turnout of votes so far. It goes without saying that if Texas goes blue, that's the ballgame for Biden.

Staff member
Biden could lose all of those tossup states and still win the election. He’s probably going to get at least one, and an environment where he wins one of those states is probably one where he wins nearly all of them. North Carolina seems like the best bet, but Georgia is also looking really good. Ohio seems less likely, although I read that Bloomberg was going to be sending a lot of money there in the last week.

I don’t know about Texas, it has been fools gold for Democrats over the past few cycles, but they have to compete there. Biden might not win, but he could come within a few points and that might be enough for the Texas state house to flip, which is a huge win for Dems.

But, as I’ve been saying for quite some time now, Biden is just a polling error away from sweeping these states (and maybe one or two more).

Edit: Just saw the new ABC poll in Wisconsin. Biden is up by 17 points. That is wild.

Mosh said:
But, as I’ve been saying for quite some time now, Biden is just a polling error away from sweeping these states (and maybe one or two more).
Click to expand...

I'm starting to wonder if one isn't out there in youth participation. 18-24s are the Democratic El Dorado, but they may actually vote this time, such is their hatred of Donald Trump (it sure isn't a love of Biden).

Staff member
I’ve been reading a lot on youth turnout and that seems like a strong possibility. Anecdotally, my sister just turned 18 and the people in her age group are not just excited to get Trump out, but they’re actively excited about civic participation in a way that people my age (more of the standard millennial types) historically haven’t been. There’s still a lot of “reluctant Biden supporters” around me, whereas younger folks seem to be more pragmatic in understanding that progressive wins requires a broad coalition including folks who are more moderate. These are people who weren’t old enough to vote in 2016.

Staff member
I mean if you were 16 in 2016 you got a huge lesson on what happens when coalition building doesn't happen.

Staff member
There was a bit of punditry 4 years ago about whether Gen Z would be more conservative than millennials. It was a ridiculous thing to speculate on, considering none of those people were even old enough to vote then, but I do wonder if Trump has killed any hopes of a young GOP coalition for the next generation. Older conservatives seem to tolerate Trump out of a desire for a Reaganist approach to small government. Younger people don’t have that historical context and instead have a pretty good example of what an incompetent executive branch is capable of. With Hillary Clinton in office, the GOP would’ve had time to brand themselves as the fiscally responsible/pragmatic party. Instead it looks like they’ve created a big generation of progressives.

With the polls in Florida predicting a very close race there: Could we be in for a repeat of the 2000 election with re-counting and court cases and what not? Or have there been any court decisions since then that make it clear how things will play out in that state?

With all the bullshit the Trump camp has been spreading regarding mail voting, I'm sure there will be some court work in at least some states. I'm already seeing that courts are making decisions on how late mail ballots can be received and still count. But I really do hope that in the end, it will be the voters and not the courts who decide the winner ...

Staff member
The most likely repeat of 2000 will probably happen in Pennsylvania, but it’s not a strong possibility. The thing with 2000 was that the race was very close. Whoever won Florida was going to get to 270 and win the election. This year, Trump needs Florida to win but Biden does not. If Biden does win there, he will probably be well above 300 electoral votes when it’s all said and done.

PA, on the other hand, seems likely to be the tipping point state that delivers the 270th vote. If there’s a close race, the winner of PA might decide the election. But Biden has quite a few backup options without PA.

Basically, court decisions might factor in during a close race, but there are a lot of indications that this won’t be that close.

My sins are many

Wish we had more tri-partisan messages like this in advance of the election.

I think we can conclude that it is no use for us Europeans to stay up tomorrow night in hope of knowing the outcome of this election ... with PA as a potential decider, and with that state accepting mail-in ballots arriving up until three days after the election, maybe we won't know who wins the state until Friday.

Of course, if some other toss-up states are finished counting on Wednesday, we'll know.

Dr. Eddies Wingman said:
I think we can conclude that it is no use for us Europeans to stay up tomorrow night in hope of knowing the outcome of this election ... with PA as a potential decider, and with that state accepting mail-in ballots arriving up until three days after the election, maybe we won't know who wins the state until Friday.

Of course, if some other toss-up states are finished counting on Wednesday, we'll know.

I believe we will be seeing riots not matter who wins, which is pretty shitty.

Pretty handy guide on when to expect results 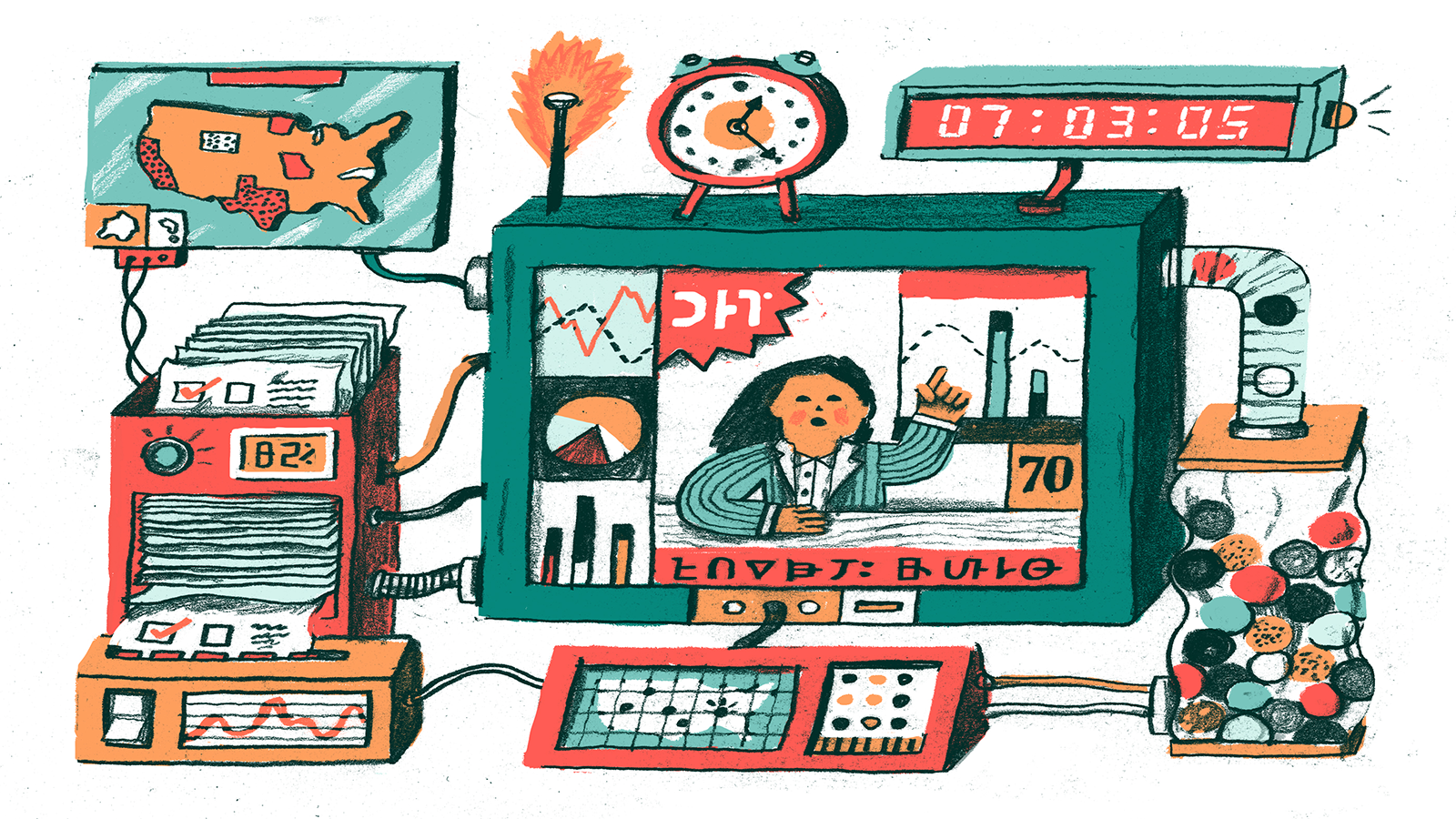 When To Expect Election Results In Every State

A guide to poll closing times on Election Day 2020, major Senate and House races to watch, how long vote counting will take, and when election results are expected in all 50 states.

For the Senate, but likely both Georgia seats will go to a runoff, so will probably not know who wins those seats until January

Staff member
Dems probably lose those Georgia elections if they go to a runoff, unless Trump wins (in which case Dems are probably underperforming anyway and the republicans win on election night). Best path for the senate is CO, ME, AZ, NC, and maybe one more tossup/long shot if they’re having a good night (GA, IA, AK, MT, SC).

I am becoming more confident that, while the election might not be formally called tomorrow night, Biden might be clearly favored to win by the end of the night. We won’t know PA until Friday, but it won’t matter if a state like Georgia or even NC goes to Biden. Florida is unpredictable as usual (probably more likely to go red) and AZ looks really good.

My ideal election scenarios are:

I placed a 30€ bet on Biden so I can have a good laugh no matter who wins the election.

I think the first scenario is the most likely one. Without checking the map for sure, I think Dems controlling the senate for a trump presidency would require them to win senate seats in states Biden loses. That could happen, but seems less likely if Biden is also losing the presidency.

Staff member
So what's everyone's prediction for tomorrow? I'm sticking with the same one I posted earlier this month. It's far fetched, but if I'm right maybe I can steal Nate Silver's job.

Regardless of what happens, I hope we have a decisive winner on election night. I don't know if the country can survive this thing dragging out through the week. 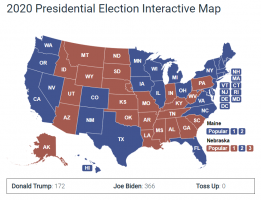