New posters! Who are you?

Powrslave said:
Gday Guys \m/ from Down under

My first Post here, Ive been using the Nickname Powerslave on the net for over 30 years now Was suprised I only had to drop the 'e' hehe

Welcome to the forum Powerslave. And greetings from Ireland!

Noob here. FC member for years, didn't know this forum existed. Happy to join in the chat. How's everyone today?

Welcome aboard things are well here, we're in the lovely runup to a new album release.

I am from GREECE! I am 33 years old! I love music and I am constantly trying to evolve and learn it. At school I was a bad student, but the inspiration that music has given me has made me look!

I am here from 2012, but I never introduce myself. I am not very active but because of new album I am online again. And I stuck at sea so I have a lot of free time.

Coming from Croatia, 28 yrs old. Always happy to discuss about music, history and travel. I was big fan of sport but in last few years I lost interest.

The Black Country Bushido! I guess that translates to Black Country Warrior Way. I'll just come out say it here, I'm not a Samurai, though I suppose it does tie in with the Maiden album that's on the way...

Sending transmissions from Florida of all places. A long way from the Black Country I know, but the weather is a lot nicer here. I've been a Maiden fan since I was about 10 when my cousin made me a tape of Live At Donnington and haven't looked back since.

Since I finally joined the forum after lurking for years, I think it's time to introduce myself.

I'm Greek, but born and raised in Germany, where I'm studying computer science. If all goes well I'll have my degree in the next couple of years. I basically grew up with rock and metal music because of my oldest brother. My first proper concert was seeing Kiss when I was 4 years old. Among some of my favorite Bands are Maiden (obviously, they'll always be my number 1), Blind Guardian, Evergrey, Billy Talent, Cradle Of Filth (and Iced Earth used to be incredibly important to me, that changed after the siege of the Capitol, haven't listened to them since then and I don't think I'll ever return).

So far I've only seen Maiden twice, 2007 on the Matter of the Best tour and 2013 on the Maiden England tour. I've got tickets for LOTB, but we'll see when that'll continue.

One of my largest hobbies is gaming, but my biggest passion is music. I'm mainly a guitarist and I'm currently recording my first full length album. Guitars, bass, vocals, percussion are recorded, drums and synths are programmed. Hopefully I'll be able to release it this year.

gazda said:
And I stuck at sea so I have a lot of free time.
Click to expand...

Yes, but everything is related now to Covid. 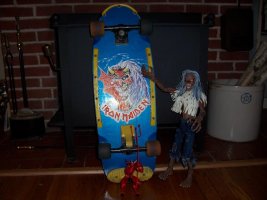 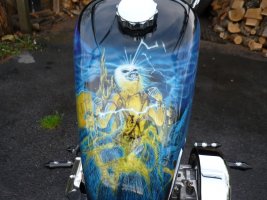 Just registered and pleased to be here. I started following Maiden in 1980 and saw them live for the first time in 1981 so they've been a significant part of my life for many years now. They defined my youth, they defined my interests and I've passed this on to both my son's, who are also Maiden fans.

Say, you wouldn't be the same Slartibartfarst42 who hangs/hung around on the Bareknuckle pickups forums, would you? If so, I really enjoyed reading your reviews, they helped me finally settle on some new pickups.

Welcome to the forum!

Edington said:
Say, you wouldn't be the same Slartibartfarst42 who hangs/hung around on the Bareknuckle pickups forums, would you? If so, I really enjoyed reading your reviews, they helped me finally settle on some new pickups.

Yes, that would be me It has been a long time since I've been on that forum but I'm really pleased my reviews helped. I eventually left Bare Knuckle because I thought they were becoming ridiculously expensive. As a result I started to look elsewhere, and that led me to contact Jaime at The Creamery in Manchester. This was a revelation! The first pickup I ordered from The Creamery was the Classic '83, as that was aimed at a similar tone to the Holydiver. To my surprise, the Classic '83 was miles better than the Holydiver in every way, as well as being substantially cheaper. For another guitar, I fancied an Abraxas, so I gave Jaime the specifications and asked him if he could build me one. He did so for the same £80 as his normal pickups and it sounded the same as a Bare Knuckle Abraxas. You really should check them out.

Staff member
You wouldn't be the same Slartibartfarst who carved his signature into Norway's coastline, would you?

It's quite nice, btw.

Brigantium said:
You wouldn't be the same Slartibartfarst who carved his signature into Norway's coastline, would you?

I got an award for Norway I love doing the crinkly bits around fjords.
Last edited: Sep 7, 2021

I've been skulking and lurking beneath your bed for a while now since my time working from home also coincided with one of my periodic Blaze Bayley obsessions and i enjoyed wasting many a hour reading through your extensive Blaze threads. I became a Maiden fan shortly after i first got into heavy music a year or two before Brave New World came out (still a top 3 album for me) and am thoroughly charged up with piss and vinegar once again thanks to Senjutsu. Long may it last