So H's red Destroyer's been around since at least Toronto. Damn, I felt special last night.

A few days late, but holy hell...the “Chicago” show was beyond amazing!

Won First to the Barrier and I never want to be in the seats again! Even @Detective Beauregard agreed! All the fan club folks were great about helping you back to your spot after beer/bathroom breaks.

The Raven Age was less shitty than last time, mostly cause of their new, less annoying singer.

Iron Maiden was in top form. Bruce was PHENOMENAL. Whatever was happening at the beginning of the tour is in the past, he was just on fire. From where we were (2nd row in front of Davey), Dave was the loudest and Janick was barely audible. Only downside from being so close was that I couldn’t see Nicko at all.


Setist highlights were easily Icarus, Clansman, Sign of the Cross, and Revelations. We got the Adrian solo on the latter, thank god.
All around an incredible night. Easily the best Maiden show I’ve ever seen and probably the best concert experience I can remember. 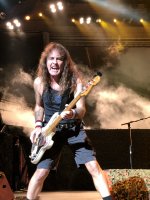 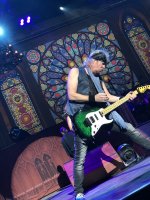 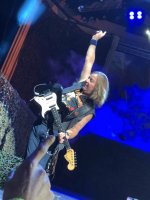 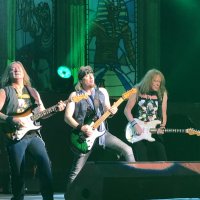 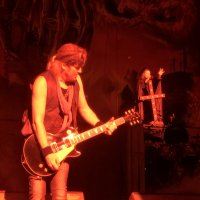 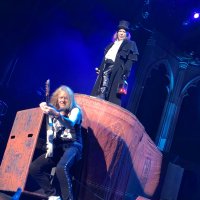 The Red and the Black said:
Alexander the Great jokes.
Click to expand...

Confirmed for the next tour!
Jokes, not the song.
I never doubted that shows would do well since Maiden always do great here.

Staff member
Watching Janick prance on stage right now and if you don't like it, you can shove off.

Thanks for confirming Raven Age changed singers. I thought this one looked and sounded different. However, I thought RA was alright. This time...total snooze fest.

Shadows in the stars, we will not return!

He even seemed extra prancy tonight. It was fucking awesome.

I will consider myself shoved.

Lego said:
He even seemed extra prancy tonight. It was fucking awesome.

Should have come for a beer.

I like how discreet the guitar change is, I hadn't noticed the roadie at first.

Nine months of build up all ended tonight. It's going to be a really depressing couple of days going forward.

That being said, the Chicago show was fucking amazing. Fourteen times I've seen Maiden now since 2008, and I think that Chicago show is the greatest of them all. I was FTTB, and was on the left side of the stage (closest to Dave/Adrian's side). The whole time leading up to Maiden just felt like a bomb about to explode. And it did during Aces High. The crowd participation was the most I've ever witnessed during a Maiden show. Most of the people in the first several rows of the pit were singing along to every song without missing a beat. I was the most energetic I've been in a long time. Maiden shows just do something for me that nothing else can replicate. They truly are something special.

Just got back from my third and final show, in Indy. Was also FTTB, but this time center stage right in front of Bruce the entire show. Absolutely epic. I caught one of Dave's guitar picks after Two Minutes to Midnight; he threw it right to me and I managed to catch it mid air before anyone else around me was able to go for it. And then I caught Adrian's armband at the very end of the show/encore.

Still running on the adrenaline. Probably getting no sleep tonight. Still have a couple days off of work for vacation to settle down. Drove a total of 1900 miles over the past five days to see them the three times I did, and I'm sure I'll experience that lag/exhaustion from it over the next day or two.

There is no better live show than Iron Maiden, and there are no better fans. Until next time...

Couple of the highlight pics I managed to take from Indy.

Just a few hours to go!

The Raven Age will be super freaking amazing sweet for sure!

I read that as shove him off. That time he fell...did he fall or was he shoved?

@Black Wizard My luck continues. I got FTTB for Tacoma.

Black Wizard said:
The Raven Age will be super freaking amazing sweet for sure!
Click to expand...

My life is now complete — I have seen the greatest rock concert in the history of the art form. I don’t know who these geezers are who are up next, but they’ll never compare to the perfection I just witnessed!!!!!!

...but in all seriousness, what a great show Maiden put on tonight. Bruce sounded terrific, the drum sound was excellent, and even Janick consistently played well. The songs in the set list that aren’t favorites of mine in the studio still came across great in the live format, and the theatrics really added a lot to the show.

I took my wife’s sons to the show and it was their first-ever rock concert. They were suitably impressed. Too bad I’ve now ruined all other concerts for them...

Jer said:
I took my wife’s sons to the show and it was their first-ever rock concert. They were suitably impressed. Too bad I’ve now ruined all other concerts for them...
Click to expand...

My daughter is showing great interest in coming to the next Maiden gig with me (she will be 6 years old by then) and I fear I would be in a similar situation!

Brigantium said:
I read that as shove him off. That time he fell...did he fall or was he shoved?
Click to expand...

He once said that Adrian pushed him off (since the band is still going I can only assume it was a joke that fell flat ...)
http://www.radiotangra.com/en/interview/read/19141.html