Niall Kielt said:
He wishes all them other people would just fuck off and die.

Reasons Why Adrian Is My Least Favourite Member - Part Two

That time he didn't swap instruments during the German tv thing for Wasted Years.
Cutting the neck of his his t-shirt during the Somewhere In Time tour.
Having the worst hair of the 80s.
There was a shit necklace at some point.
Destroyer. Its not a Strat.

There may be more.
Great guitar player though
Click to expand...

I think Adrian just likes his own space. My friend and I met Adrian and Janick at the Download Festival in 2016. They were staying in a fancy 5 star hotel just outside Donington Village. It was the Saturday and the rest of the band were coming down in the evening as Maiden were playing on Sunday.
We got a lift to the hotel in the afternoon and walked in to the main reception area. It was really funny coz I asked the receptionist were Iron Maiden at the hotel and she said there were 2 of them at the hotel with their families.
We got a couple of pints and headed outside. So we were sitting at a table and then my mate says to me "There's Adrian"
Before I had time to think he got up and started walking towards him. Bear in mind that we were extremely drunk.
So we walked over and there they were. Janick and H and all their family.
Of course I was completely star struck but we had a great chat with them for a while and even got a photo. One of their sons took it.
I was speaking to Jan and my friend was talking to H.
I have to say they were really friendly and Janick is a really down to earth guy.
My friend said that Adrian was really friendly and was chatting about the festival mostly.
Anyway thought I would share that once in a lifetime experience

That photo is from the Trust facebook page. Trust are rehearsing for their upcoming tour and there are also photos from that room where you see Trust playing without the Maiden duo on the photo. Nicko probably wanted to visit old band mates and Adrian joined.

Trust as in 'Anti Social'?

And now one picture on the room Maiden are using at Planet Live...

Make sure you don't posy any picture with a setlist!

Nicko's pants with flying pigs should be also marked with spoiler.

mihai said:
Nicko's pants with flying pigs should be also marked with spoiler.
Click to expand...

We have the first picture of the setlist:

matic22 said:
We have the first picture of the setlist:

Also, another thing from those photos, H's guitars.

I can see 3 Jackson signatures (front row, #1, #3 and #4), Guitar #2 is either his green CS Jackson (with unfinished neck, which is darker) or one of his old Strats with Roland pickups, which would potentially mean that BTATS will be played. In the back I can see his LP Custom, potentially another LP, a few more Jacksons and the X-stroyer.
D

What picture are you looking at?

Zare said:
What picture are you looking at?
Click to expand...

Both of those in Maiden's rehearsal room.

matic22 said:
We have the first picture of the setlist:

I can just make out wrathchild! 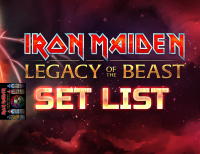 Spot on! They opened for Maiden in 1982 with Nicko on the drums before he replaced Clive Burr... who went on to play for Trust. Much later, Bernie Bonvoisin (Trust's singer) used music from "The Prisoner" in his film Les Démons de Jésus (1996)... but without the vocals because he couldn't bear Bruce

Is there any interviews with IM band members in the latest IMFC magazine, because in the last one before TBOS tour Nicko couldn't keep his moith shut and spoke about WY and TOAC, which were both played.