The_7th_one said:
When I look that paint in the wall… I don't give a shit to be honest
Click to expand...

If it was a recurring motif, I would be curious about the significance, not necessarily think it anything to do with a new Maiden album, maybe it's the artist having fun like Riggs with his cat, reaper and signature. Maybe it's a wind up as they know nerds like me will speculate?

Yes, They like to play with the fans with messages like that, like the thing with Benjamin Breeg or named 'The Final frontier' as the new album in 2010 so the fans would think that could be the last album. But with 6 years since their last album…well I don't see the joke

It most likely stands for writing on the wall.

That's how I can summarize their current way of business. LOTB tour was a hit, both years (2018 and 2019). They've pumped some certain money into production, a lot of dates were sold out, should they do a quick run into 3rd year? Well, they probably should since those original dates (2020) sold pretty good. Pandemic hit, should they reschedule? Yeah, the situation is out of their control, a lot of bands did that, they still have their production, a lot of people have their tickets, and it's "just" 2 months (2021). Well, the global situation didn't get that better so what to do now?

First, I don't buy that they're "contractually obliged" anymore. I don't know much about music business, but I highly doubt the name of the tour is a big issue when someone is booking them. The dates and arenas are being moved, the rider from Maiden's side is probably the same, the organization is providing them with place, time and money, there's probably some article in the contract which dictates how much will they play (in matter of minutes) but everything else - completely Maiden's management decision. I mean, it's not like every country is China, so they have to send their setlist before the gig, right? Also, even if they change the name of the tour I believe there would be more joy than backlash. Unless they're planning to squeeze some new songs (or old songs that haven't been played) on this 2022 leg in which case this announcement is just poor marketing. Legally, I don't think their hands are tied there. Hell, 3 summers back Dream Theater did a quick Europe tour, and they promoted that they will play "Scenes from a Memory" in whole (which didn't happen). There was an upraising from some concert goers who demanded legal actions and money refund - which also didn't happen. Funny enough, they announced same thing a couple of months later and the arenas were pretty full again.

Second, even if there's a new album, is there some legal contraction for them to say "Hey listen, we got a new album out, but can't say anything at a moment?" Doesn't seem likely. In the past, that's the way they did it (holding the cards close to their chest) because they knew something is going to happen for certain and planning the announcements had a big impact. But what Brigantium said in this or in other thread - Maiden management lately looks a bit... lost. I applaud their business style for the past 20 years (I've talked about it in other thread) because they wouldn't be where they are now if they didn't play their cards like they planned. But this now? It might be my bad judgement, but for some time it looks to me like Steve isn't anymore that guy who has to have at least one hand on the control board. Rod? He doesn't strike me as a risk-taker, more like a guy who likes to plan 10 steps ahead (which in this situation is impossible). To be honest, in the last two decades Maiden machinery has been so well built that now it runs by itself, with little or no input from Rod or Maiden members. Here a hypocritical example No. 1 - if there is a Croatia date and tickets go on sale I'll buy them the minute they go online.

So why does this announcement bug me a bit?

Well, Iron Maiden don't owe anything to anyone, including me. They've put out 16 albums and did 1000 show which I and a million other people will cherish. But they're still active, right? It's not like they've officially disbanded or are on hiatus. So what's going on over there? I don't say Adrian shouldn't fish, Janick shouldn't clean gutters, Bruce shouldn't fence and so on, but they're also professional musician - do some music goddammit! I understand each one of them is individual who wants to spend his free time as he wants or wants to pursue some other hobbies/interests, but there will be a 31-month gap (!!!) between their last gig and their next gig. And if the only thing (musically) we get is poorly produced live album and one YT clip of Adrian playing a song, well, that's just a bit... lame.

Let's say they've recorded an album and the next gig is June '22. Would it really hurt if they put out a song or two in the meantime? Cover? Title? People are already saying they'll go to a Maiden gig as soon as it's possible, so I doubt that any kind of announcement will make people lose their interest - quite the contrary. Also, I doubt 6 months gap between Book of Souls release and first date hurt their ticket sales (although there were different reasons). "But they already have the production that goes with the tour/setlist, they won't change it!" Well, if a couple of inflatable dolls and stage backdrops are the reasons why they're sticking LOTB as it was 3 years ago, that doesn't put them much farther than some other musicians who are known for their "profitability" aspects and who people like to rant about. Let's say they don't have an album. It's known that business is hard to conduct these days, but honestly - is it that hard putting 30 people (band members + technicians and studio staff) and a truck of equipment in one place for two months for a band of Maiden status? If they wanted, they've could've done it a couple of times by now or at least plan it for this year.

This all may sound a bit negative considering I'm still in camp "anything goes". I still can imagine they put out a song/EP/album in this/next year, they completely change the LOTB setlist, replace Nicko after this tour and tour new album with someone else and so on and so on... But I know chances for that are slim, you know why?

srfc said:
If it was a recurring motif, I would be curious about the significance, not necessarily think it anything to do with a new Maiden album, maybe it's the artist having fun like Riggs with his cat, reaper and signature. Maybe it's a wind up as they know nerds like me will speculate?
Click to expand...

recurring? i hve never seen it before.....

I love how they made a video labeled "Talking music with Adrian Smith - Gangland" months ago, and didn't publish anything since. I mean if you don't intend to make a series then don't call it like that.

srfc said:
If it was a recurring motif, I would be curious about the significance, not necessarily think it anything to do with a new Maiden album, maybe it's the artist having fun like Riggs with his cat, reaper and signature. Maybe it's a wind up as they know nerds like me will speculate?
Click to expand...

There hasn't been a single show since this wotw thing appeared, right?

This 'wotw' is the only text on the artwork, it's something that everyone notices, its function in design is obvious, it's no easter egg or logo or signature. The text is more readable than the title below the band logo.

You know what would be not bad, but a real cringe moment? If it turns to be something from/for the game.

Zare said:
I love how they made a video labeled "Talking music with Adrian Smith - Gangland" months ago, and didn't publish anything since. I mean if you don't intend to make a series then don't call it like that.
Click to expand...

And why they put 'to be continued' at the end of The History Of Iron Maiden - Part Three... (Part Four is still unreleased).

It's not like they will do a history tour for the albums in the 90's - that opportunity was shelved with the LOTB tour imo.

It's on the poster that comes with Nights of the Dead.

I've been moving towards indifference for some time now and I've almost arrived. I'm sure it will change when and if they announce an album, but there you go.

Just out of curiosity. How do people feel about the Steven Battelle version.
Is it better/worse or same as the original?

This is certainly interesting (and doesn't have a guitar playing the melody in the same pitch as the singer which is a great plus), but I think it only highlights the issue with the song: unsingable vocal melodies that Steve wrote on a bass.

I continue to have no issues with the instrumental, but this is a song that could have used a vocal re-write by Bruce.
D

srfc said:
It's on the poster that comes with Nights of the Dead.
Click to expand...

oh really? i dont see it

Is something simple like this statement too much to ask for?

This is just like looking at another mans woman and wonder why mine is not like that!

It is only acceptable to formulate this sort of response as a meme!

see attached scan of the poster that is inside the album 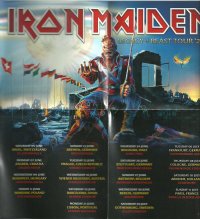 The WOTW text is a teaser for the new album.
It's going to be called Warriors of the World, and it consists solely of Manowar covers.
The artwork has already leaked.

This is my favourite so far.

I would be a little disappointed if we actually never see a new Maiden release but the gratefulness is so overwhelming I would eventually not care. The fact they have gone on this long always trying to make quality, compelling metal while touring the way they have is all a fan could ever ask for.

koponto said:
The WOTW text is a teaser for the new album.
It's going to be called Warriors of the World, and it consists solely of Manowar covers.
The artwork has already leaked.View attachment 14330
Click to expand...

Because of this I've heard Joey DeMaio has challenged Steve to a fight to the death...