7/10. Good rocker, nice solos, sounds great live. But not a song that I would normally go out of my way to listen to, which is what makes or breaks the difference between a 7 or higher for me. Also, lyrics do rather butcher the mythology.

(Going to use spoiler tags for my list for now on as to prevent the page from stretching out.)

The chorus to this song is extremely uplifting, despite the subject matter. I really like Bruce's performance in this song in particular, even if it sounds like he's stretching somewhat. The final guitar segment does drag a little bit though.

Staff member
Adrian was right. This song is best when it is a bit more measured. The sled up versions that got played live don't have time to breathe.

This is a good song, simple lyrics, but pretty standard fare for this era of Iron Maiden. Lyrical simplicity doesn't count so much, not when it's so lovingly sung. But the chorus does repeat - not that the "repeated chorus" crowd notices.

That's an excuse for "I already decided I wouldn't like new Iron Maiden", by the way, the repeated chorus complaint.

Anyway, Flight of Icarus suffers from a few problems. It's simple, like Revelations, but doesn't make up for it in intensity. A great guitar solo, though. I waver between a 7 and an 8, but I'm going with 8.

I find this song very annoying. When it comes on my shuffle, I tend to skip it.
How this song survived this far in Iron Maiden Survivor is beyond me.

The highlight: I don't see any highlights in this song.

9/10. I have always really liked this song. I think the lyrics are pretty great and really like the atmosphere of this song. I can see why it is disliked by some though.

9. A personal favourite of mine.

Kinda underrated song from this album/period of Maiden. Very melodic, great live song, cool chorus, legendary trade off guitar solo like NOTB, and that last part where Bruce sings Fly....with this building up guitar solo, make this song a classic in my ears. 9/10

Flight of Icarus is one of many songs to highlight the “Maiden gallop.” Smith and Dickinson wrote together for the first time here and produce a great mid-tempo rocker with an anthemic chorus and a brilliant solo. Steve always disliked the tempo at which the song was recorded, but you wouldn’t know it based on his playing: he fills every pocket with perfect leads. Bruce wanted to keep it slower in hopes of achieving airplay and it became one of the only Maiden songs to hit the radio in the United States.

Gathering speed as I head down the runway

I was listening to this song when my younger brother came into my room and asked "Haha what are you listening to?"
Now all his friends listen to it because none of them can hear "like an eagle" properly, if you know what I mean.

Staff member
I'd say the proof is in the fact they don't play it.
It is one of their better-known songs in North America.
Could certainly fill the hole left by 2 Minutes and the like for audiences over here.

Staff member
It isn't until track 3 that we get anything remotely radio friendly and the beginning of one of Metal's greatest musical partnerships. Another great song. I'm not a big fan of the huge chorus with the choir of Bruce, but besides that this is one of the great Maiden short rockers. Great guitar solo too. It's commercial but still has that Maiden edge. Much better than the likes of Run To the Hills.

@DJMayes you're gonna love this! And check Bruce drawing breath before the final scream.

I actually bought the 45 vinyl single for Flight of Icarus when I was 14 and when my mom saw the cover, she promptly ripped it up and called it satanic! I wish I still had it now! 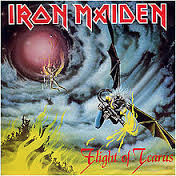 One of a handful of Maiden songs that I absolutely love without being able to define why.

Musically it's nothing special and the vocals are a tad high for my liking. But the gallop is great and the chorus is sensational.

This one hasn't clicked with me this time as it did before. It has great riffs and good solos. Bruce sounds strained from time to time on this recording, so I prefer the '97 version of Bruce's solo band.

It might be a relative hit for the band and more commercially friendly than a lot of their other stuff, but that means nothing. This song is just flat-out great. One of the few times I've ever doubted 'Arry's judgement. 9/10

A solid rocker featuring marvelous instrumental work and some genius lyrics from Bruce (the idea to twist the original myth into an allegory to teenage rebellion is very clever). 9.
Last edited: Feb 15, 2018

It’s a strange take on the myth, but an interesting one nonetheless. I don’t think it was caused by ignorance of the original but rather by a wish to do something different. The Live After Death version is pretty great, the faster speed rocks especially at the beginning. 8/10
You must log in or register to reply here.
Share:
Facebook Twitter Reddit Pinterest Tumblr WhatsApp Email Share Link
Top