GhostofCain said:
I think the twitter user is just making a joke. What could a documentary with Frank Turner discussing things with Suggs (from the band Madness) have to do with Maiden?

If there is a documentary I'd say that is one step beyond.
Click to expand...

Imagine Bruce jumping on stage in baggy trousers.
Edit: @srfc was on the same brainwave

What happened to the supposed Stratego video?

GhostofCain said:
So what?

Don’t get me wrong, but I find this trend of YouTube reviews from musicians from other bands quite amusing. Are they just trying to get free publicity or what?
Click to expand...

Don't know. Maybe he needs some public recognition as his band is not famous in Europe, just in France. And Maiden is a monster around the globe. So, the possible reason of his spitting on the best heavy metal band in the world is jealousy... That's why he's criticizing 'Senjutsu', Maiden and Kevin Shirley...

Belshazzar said:
What happened to the supposed Stratego video?
Click to expand...

Maybe it has vanished in the obscurity of a black hole ?

ABandOn said:
I noticed some days ago another post from Daniel, on twitter: an hint to a documentary on Maiden? (sorry if it was posted before)
Click to expand...

Belshazzar said:
What happened to the supposed Stratego video?
Click to expand...

Not one of my favorites,i dont like how they sound in that álbum.

dickinson1978 said:
dont know...just i dont like that album. I prefer Virtual XI and X factor than DOD by far.
Click to expand...

This is really amazing. There is truly a sound and an album for everybody. Did you like Angel and the gambler, Educated Fool or Don't look to the eyes of a stranger?

Kalata said:
...ofc, he doesn't want to play ''Stratego'' (because this was the most difficult song for him to record, particularly the gallop), but admits that's not gonna happen.
Click to expand...

Steve and Bruce: "So, Nick, we are gonna do Aces High, then Where Eagles Dare and then we think about replacing Two Minutes To Midnight with Stratego..."

Azas said:
Album is great. Along with TBOS best reunion album. But samurai vibe to me looks so forced and not fitting. Eddie should be Albion/Avalon isles warrior 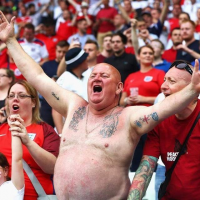 GhostofCain said:
Their styles are so different than I cannot think how someone could not be able to tell them apart.

Anyway, Adrian brought something special to Bruce’s solo albums that wasn’t there on Tyranny of Souls. Being a band by the time the went to record The Chemical Wedding probably helped too.
Click to expand...

Absolutely agree! Roy is a shredder through and through. Just listen to the solo on the opening track of Tyranny for example - it's so boring, just one note after the other, all at the same tempo with zero feeling.

I think on the whole it's a very strong album. No real weak songs...but of course we can still all rank them.
I'm not sure it's quite up there with BNW and AMOLAD but its close. How it sits with DOD TFF and BOS I haven't figured out yet.
I think the song Senjutsu it one of the highlights for me. Different, dark, unusually emotional. Very affecting work I think.
Just a quick word on the 'epics' of the album. I think Steve over the last number of years has gone down the route of the extended song...as opposed to an 'epic'. I still think Rime is by a long way...his most epic track. Purely for the sake of the scope of the track. It really travels to different musical locations...comes out of the middle section and builds and builds into a new explosive world. It Travels.
I think the recent stuff, which I do love by the way....doesn't really do this scope/travel thing, that I feel robs them of some of that epic status.
I'm also not a 'Powerslave' fanboy. Of course its great, but no better then BNW and AMOLAD. Each with their own vibes and flavours.
I suppose theres just that quality of scope and travel that I would love to have seen in Steve's epics. The new stuff tends to stay in the same musical location. Anyways...just some thoughts. I'm very happy with the new album and look forward each day to selecting a song to get into.
I know I haven't unlocked the whole album yet

The_7th_one said:
I have a question for you all , it's about something that has intrigued me reading the Steve's special thanks at the end of the booklet: He thanks all the people who have worked for Maiden since the beginning : members and technicians… Is it some short to say goodbye? What do you think?
Click to expand...

Now Im really curious about thanks list on the album cover, Steve mentions all those people, it has to be hint or goodbye and it just doesn't feel like random thing to happen today.
Did someone mention that they had been in contact with Di'Anno later, if the list was compiled in 2018? I recall reading that somewhere.

The Death of King Arthur 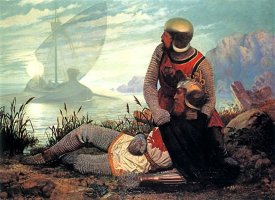 @Azas this relates to?

Imo, more fitting vibe, than samurai theme. If this is their last album, it would be logical to use Albion/Avalon themes.
D

Jadukor said:
This is really amazing. There is truly a sound and an album for everybody. Did you like Angel and the gambler, Educated Fool or Don't look to the eyes of a stranger?
Click to expand...