I finally finished up my run through all the Rush studio albums, and here’s what I wound up with. Scores are weighted averages, since the early albums in particular have some giant variations in song lengths.

I’ve always felt like more of an 80s Rush guy (specifically from Moving Pictures onward), so it was interesting to see A Farewell To Kings, Hemispheres, and Permanent Waves rate so high this time through. I guess I’ve grown to appreciate them more.

I was surprised that Snakes & Arrows avoided the bottom five — I rarely listen to that one because it never really grabbed me at the album level, but there are a number of good songs on it. I was also a little surprised that Counterparts landed as low as it did, since I played the hell out of it when it was new; but I guess while the production may hold up on that one, the songwriting doesn’t.

It’s still hard to believe that Peart is dead and the band is done, but what a legacy they’ve left behind. By my rating system they had 2 excellent albums, 8 great albums (7 if you don’t double-count Vapor Trails), 7 good albums, and only 3 that were merely OK. That’s a hell of a standard to maintain.

Thanks for sharing your take Jer. I can't resist saying that I'm surprised to see you prefer the original Vapor Trails over the remix. What do you prefer about it? Very high rating as well!
Last edited: Mar 10, 2020

Forostar said:
Thanks for sharing your take Jer. I can resist saying that I'm surprised to see you prefer the original Vapor Trails over the remix. What do you prefer about it? Very high rating as well!
Click to expand...

You can click through on the “>” next to each rating to see my detailed comments.

In a nutshell, while Remixed has better clarity for each instrument and fixes the clipping issues of the original, it noticeably lowers the guitars in the mix, and it usually emphasizes the lower vocal harmonies instead of the original melodic lines. The weaker guitars make the album lose some of its bite, which is a big part of its appeal to me; and the harmony tweaks just sound wrong to my ear after listening to the original so much.

Remixed is still a great album, and I prefer some of the tracks on it to the originals; but overall I prefer the original more.

Picked up the Clockwork Angels Live blu ray recently. I had missed the original tour because they were playing at a bad outdoor venue in my area that time around, and I’d seen every album tour since Roll The Bones already, so I figured I’d just catch them the next time around...and then there was no next time.

The video quality is good on the main cameras, and the mix is nice. Camera direction is fine, perhaps more quick cuts than I would care for, but nothing like the ADD of recent Iron Maiden live videos.

Half the set list is composed of material from Permanent Waves through Roll The Bones, with a focus on the mid-80s in particular, and the other half presents the bulk of Clockwork Angels, with the criminal omission of “BU2B”. “Far Cry” and a “2112” medley also make the set list, and there are some bonus tracks with even more 80s goodness.

Musical performances are great, as expected. Geddy’s vocals are good on the recent material, but he strains a bit on the higher notes from older songs, and he understandably doesn’t even attempt the high stuff on “2112”.

The second part of the set includes a string ensemble, which supports the Clockwork Angels material well. Interestingly, the string section sticks around when the band returns to classics later on, accompanying “Dreamline”, “Red Sector A”, and “YYZ” to great effect.

A strong and unique showing from the band. I enjoyed it.

Cygnus Book 2 Hemispheres is the one track I have always wanted Rush to release an official live version of IN ITS ENTIRETY. I thought that would finally happen on the 40th anniversary version of Hemispheres but they only released the last chapter of the song (The Sphere).

So today the 40th anniversary of Permanent Waves released and the track list included "Cygnus X-1 Book 2 Hemispheres" which excited me but I am again disappointed.

1st it is an abridged version (omits chapter 2 and most of 3); 2nd Geddy's vocals disappointed me (thought older live material would have a better vocal performance like Exit...Stage Left did). 3rd it is not faithful to the studio version: right before vocals start Alex plays a looser version & adds effect in (not an improvement) and the quiet intro of Chapter 5 adds sound effects that (to me) cheapen the song.

Guess I'll have to be content with bootlegs from Hemispheres tour (only tour with full song performed).

Every album from A Farewell To Kings until Hold Your Fire is pure gold for me.
I'm not a big fan of the 70's Rush. It will be blasphemy but I think 2112 is a bit overrated.
The A-side is amazing though (but I prefer the live version on All The Worlds's A Stage)

I like the clear, airy, sort of floating sound he gave to the music, especially on Presto. E.g. Available Light is a joy the ears.

Also, Hine is credited as bringing Rush back to their power trio essence.

Among lots of other work (he wrote, released and produced) Hine also did two Saga albums (Worlds Apart and Heads or Tales).
Last edited: Jun 6, 2020

I like the light, airy, sort of floating sound he gave to the music, especially Presto. E.g. Available Light is a joy the ears.

Also, Hine is credited as bringing Rush back to their power trio essence.

Among lots of other work (he wrote, released and produced) Hine also did two Saga albums (Worlds Apart and Heads or Tales).
Click to expand...

RIP Rupert. Those 2 Saga albums are among their best.

Just saw The Rush Tribute Project live; WOW!!
Very professional! Every member performed great...ESPECIALLY the vocals! Singer changed his style from 80s to 70s material to match the studio versions far more accurately than I ever saw Geddy do live (especially the bridge of Freewill!).

When they played YYZ, there was a drum solo in the middle that was a mixture of different Peart solos that was pretty cool.

When they played Countdown...I lost it. I have been waiting most of my life to see that song performed live (since I missed the Signals tour). La Villa Strangiato was PERFECT and when they played Xanadu...yes they used double necks!

The attached videos aren't from tonight but will give you some idea of what I saw. Since we will never see Rush live again, The Tribute Project are a great way to experience the material live; ESPECIALLY in a small more intimate setting like a club for only $6!

La Villa Strangiato is my alltime favorite Rush Track. These guys nailed it, perfect cover.
Are they planning a world tour? Definitely wanna witness this since I never got the chance to saw The Real Masters live.

They only have 2 dates left in the U.S. and the Texas shows they are playing now were announced before the Pandemic (and they didn't cancel!; click the band link below for dates)

This club I have been to many times but this was my 1st time since the Pandemic. Most of the floor (where we would all stand) has been replaced by seats spaced out. What sucks is they are assigned by 1st come 1st serve when doors open. So next time I will need to arrive early; otherwise I will have to stand on the side against the wall (like last night).

Just started binging the discography from the beginning again and found this gem on the Hemispheres Wikipedia page:

The conditions of the studio, located on a farm, lacked the standard facilities, including a sofa; Lee described it as "really funky".[5] In one incident, a latch that failed to shut the studio doors frustrated Lifeson who, in a fit...
Click to expand...

...took it off, installed a hydraulic door opener, and built a handle on it.
Click to expand... 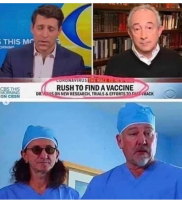 COVID-19 Book I: The Vaccine

MindRuler said:
Every album from A Farewell To Kings until Hold Your Fire is pure gold for me.
I'm not a big fan of the 70's Rush. It will be blasphemy but I think 2112 is a bit overrated.
The A-side is amazing though (but I prefer the live version on All The Worlds's A Stage)
Click to expand...

I mostly agree with this. My favorite period is 2112 through Power Windows. I also loved Clockwork Angels. My least favorite albums are Feedback, Presto, Hold Your Fire and the debut album.

@mckindog is going to love this!