Sounds quite a bit like Fight, with an industrial edge to it.

Staff member
Due to a number of health issues, including a knee problem which will require surgery soon, former IRON MAIDEN singer Paul Di'Anno has announced that he will stop touring next year.

In a statement to his fans released earlier today, Paul said, "I am gonna be 'pulling the plug' next year 2013, and making it my 'farewell tour'... It was good whilst it lasted."

According to Michael Salenius, Di'Anno's Swedish booking manager and tour manager, next year will be "a big, fantastic" last touring year for Paul, with a lot of solo shows, festival appearances and Di'Anno vs. Blaze Bayley concerts. You will also see various guest musicians jooining Paul on stage.

That would be sweet if Paul and Blaze toured together.

After seeing footage of Di'anno concerts I can't say I'd call it sweet...

Hope he comes by to San Luis Potosí, México again... That would be awesome. Maybe he cant sing that good anymore but he knows how to manage a crowd perfectly, or at least that was my experience.

Seems that Paul has realized he can't manage much longer. He has announced a farewell tour and is likely to stop performing in 2013.
http://loudwire.com/former-iron-maiden-vocalist-paul-dianno-announces-possible-retirement-in-2013/

When you look at him, Davey looks perfectly thin and fit and Steve looks like a teenager. That's really terrible and I understand why he decided to hang his boots.

Let's dive a bit in history. In 1994 Di'Anno started to sing unmelodic for the first time. Looks like he and the band were suddenly addicted to Pantera. (NOTE: This is not a song from the preceding album Murder One, that I was promoting lately).

Album opener:
and a nice ballad:
, both from the South American Assault Live album. The track "Metal Tears" was first recorded for Battlezone's Children Of Madness album.

According to YouTube, the "South American Assault - Live" album was actually recorded in a NY rehearsal room on a mobile recording truck long before Killers had even released their first album "Murder One".

Still a fine album! Recommended by yours truly.

New song (played live for the first time; will probably be featured on upcoming album):

Forostar said:
According to YouTube, the "South American Assault - Live" album was actually recorded in a NY rehearsal room on a mobile recording truck long before Killers had even released their first album "Murder One".
Click to expand...


Yep. The first lineup probably did one gig only. And I'm pretty sure it was not recorded on that day...

A bit of a disappointment. I enjoyed that album when it came out. But in hindsight, I always thought the audience sounded funny (as suspicious as the audience in Halford's Studio Insurrection ).

At the time I thought the album would cover Murder One tour, so I was a bit confused as to why the band changed members and not included one single song from that album. It was only years later that I knew the history behind SAAL. It has a great cover and i like to hear "Overloaded" and some other Battlezone songs.

Any one has seen this "fantastic" alternative cover? 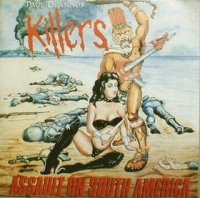 Quite over the top!

Have those on DVD. Great videos! tnx