Mondays. Not always great. In fact, usually not great.

Staff member
The construction work on the library facade is louder than Slayer. Fuck. Mind if I take this next solo of yours Adrian

Staff member
I hate working at 9 AM. I mean, I like getting off at 5, but I hate dragging my ass out of bed for 9 every day. I'm really not a morning person. It usually takes me 2-3 weeks to adjust to a morning shift, by which point I usually have a night shift. Crazy.

Sweet Jesus, where have these guys been my whole life? Currently on Hold your Ground. 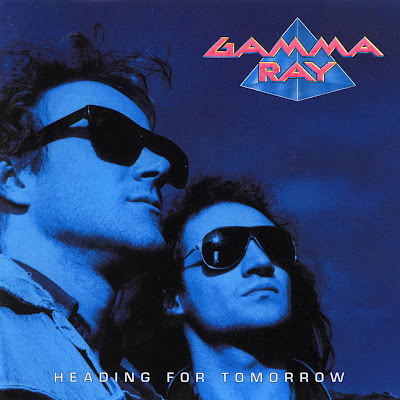 I've been trying to explore new music recently, decided to start with some power metal.

Gamma Ray is sweet. And Michael Kiske of Helloween sings on some of their stuff too!

Travis The Dragon said:
Gamma Ray is sweet. And Michael Kiske of Helloween sings on some of their stuff too!

Nice! I just finished Heading for Tomorrow, going to start on Land of the Free tomorrow.

Don't skip their second Gamma Ray album, Dityn. Different and not the most typical Gamma Ray but worthwhile trying.

Here's my review, it's one of my alltime favourite metal albums:

This is, I admit, a weird pick. Gamma Ray is known for their typical (sometimes happy) power/heavymetal songs and they actually made quite some nice albums in that style. However, I still choose this album, which is closer to my heart. It is a darker album, but also less “in your face”-metal. You could call it atmospherical hardrock with a certain tension which appeals to me. The production isn’t the best but nevertheless the performances and the mood realy grabbed me at the first listening.
More than a few songs are less breathtaking, but the opener “Changes”, the semi-ballad “Father and Son”, the epic “Dreamhealer” and the uplifting “The Spirit” are damn good. Maybe the album could have been better if the band had focussed on the more serious and darker mood, and had left out the more simple and banal tracks. Still I find it a special record, which should not go unmentioned in my list.

Right now I am in a Priest mood! Let's head out with The Priest to the f**king Highway!!!

Staff member
I prefer their albums with Kai on vocals. Ralf sounds and fits much better in Primal Fear. Dityn, get Blast From The Past.

I think it's a well constructed and imaginative record, with an experimental side and lots of attention for details. Great band effort and fine songwriting. Scheepers did excellent.

This reviewer (http://www.sputnikmusic.com/review/9078/Gamma-Ray-Sigh-No-More/) portrays my ideas well. I copied the 2nd half of it.

While vocalist Ralf Scheepers sounded great on the debut, on Sigh No More his singing is even better. His vocals give off less of a happy go lucky feeling than on Heading for Tomorrow, and the music feels a lot darker here, than it does on former cuts like Heaven Can Wait. Scheepers' sounds a lot more like Judas Priest vocalist, Rob Halford on this release. Be it his screams during the chorus of Dream Healer, or his cleaner singing style, he sounds almost dead on at times. Of course, this definitely affects Gamma Ray's music. As Ralf sings with a lot of authority in his voice, which when combined with the aggressive vibe the guitars are showing, makes the bands sound very powerful. As Time Goes By is an excellent example of this quality, especially during the catchy chorus.

Though metal historians (if such people exist…) will not likely cite Gamma Ray's Sigh No More as a very important album, it certainly deserves your attention. The album takes Gamma Ray's established sound and gives it a harder edge, as seen in songs like (We Won't) Stop the War, or Dream Healer. Overall, Sigh No More is a more focused effort from the then German quintet. I'm not so sure how easy it is to find, so if you see it in stores, make sure you pick it up....

Staff member
And now some music with balls.