Can we get
You've Got Another Thing Comin' and Turbo Lover
back in the setlist please.

At least the first one.

MrKnickerbocker said:
At least the first one.
Click to expand...

Anything could replace Take These Chains and Steeler and make me happy.

What's going on Ladies and Gents, I'm at the Mohegan Sun right now knocking back some beers before doors open. Very, very, very looking forward to the show tonight! Hoping to hear
the Sentinel and Take These Chains tonight!

Dityn DJ James said:
What's going on Ladies and Gents, I'm at the Mohegan Sun right now knocking back some beers before doors open. Very, very, very looking forward to the show tonight! Hoping to hear
the Sentinel and Take These Chains tonight!
Click to expand...

Have a good show James. Expecting full review in the coming days.

Hey I'll try to have one tomorrow when i gey back! It's about a 2 and a half hour drive back to New Hampshire (where I moved to recently).

Uriah Jeep has a hell of a guitarist playing for them! I got my beer, I got my water, watching Priest set up right now!

Have fun! Hope they kill it.

Dityn DJ James said:
Uriah Jeep has a hell of a guitarist playing for them! I got my beer, I got my water, watching Priest set up right now!
Click to expand...

His name is Mick Box, the only original member left.

I saw them with Priest last Sunday in D.C, they were both rad. Rob was even better than on the previous 2 legs that I saw. He nailed the vocal intro to All Guns Blazing. 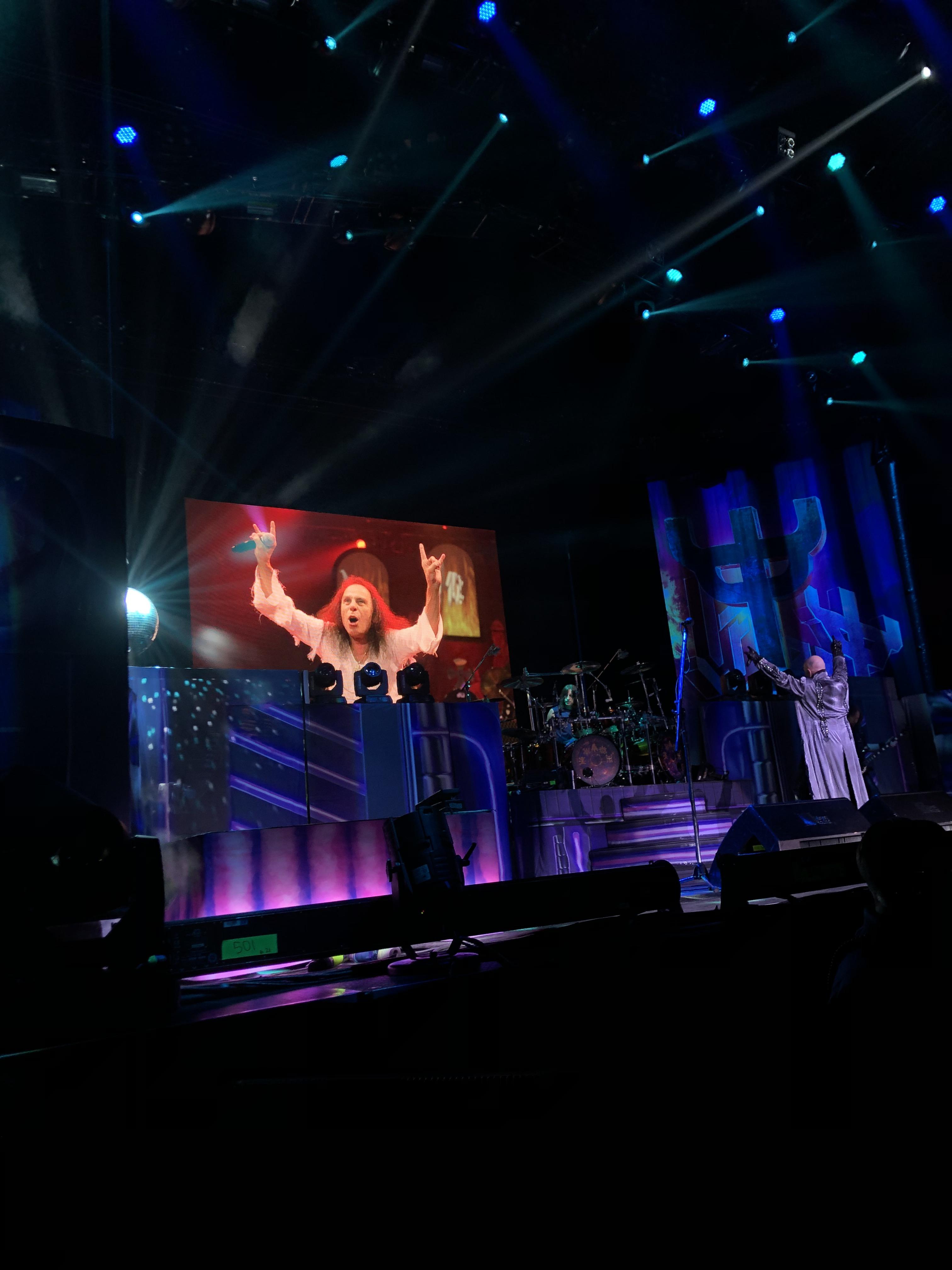 That was during No Surrender I'm pretty sure! A great moment in the night.
Well, last night was great. I left my place in New Hampshire around 12:30 PM (I think) to head towards my hotel near the Mohegan Sun. The drive only took me 3 hours with one stop. Hotel was nice and clean when I arrived. It was a Microtel. I've stayed in quite a few and I trust them quite a bit. I didn't end up spending too much time there. I called an Uber pretty quick after arriving to head towards the Casino/Arena. As I walked through the lobby to get to my Uber, I realized that a lot of people staying in this hotel must've been going to the show as well. Lots of Priest and other heavy metal shirts.

The Mohegan Sun is pretty big it turns out. I got dropped off at the bus entrance and was kinda lost upon entering the casino. I went up to a coat check window, but no one saw me in the 30 seconds I was up there, so I just went on in. It was my first time in a casino and it was pretty sweet! Lots to do and see. I ended up in a Sports Bar called the Bow and Arrow that was alright. Cheap beer and wings - all I needed truly. I had a few beers and about 10 wings before I got up to scout the casino some more. I walked over to where the box office was and asked when doors opened. They said 6 and it was about 5:20 when I asked. I planned to enter the venue around 6:50 or so to see Uriah Heep, I wasn't really worried about getting front row for this show. I didn't want to stand around that much. Anyways, I went back to that sports bar I mentioned for another beer or two to kill the time. I ended up talking with a guy that sat down next to me. He was also there for Priest. Our favorite Ozzy Osbourne album was The Ultimate Sin and he saw Maiden twice on The X Factour (what a shitty name) and we had a pleasant talk. It was cool talking in person to someone that saw them during that time. He shared the sentiments that they should've tuned down more for Blaze.

I entered the arena and found my spot in front of the stage just as Uriah Heep was starting. They started a few minutes early it seemed. As I'm not familiar with their material outside Look At Yourself, I really don't have much to say about their set other than their guitarist rocked. He was a treat to see. I liked the first song they played and also Take My Soul Away, Between Two Worlds, and Gypsy. There wasn't much movement from the crowd during their set. Uriah Heep played tight enough, and also just well enough that I'm listening to some of the songs they played right now on Spotify. I left their set after they finished up Look At Yourself to grab a beer and water before Priest's set.

This next section is gonna be about Priest's set so I'm gonna put it all in spoilers:


Well Priest didn't take long at all to set up. I only finished half my beer before War Pigs started playing. They opened with Necromancer. It's a heavy song. It's got a good chorus. Great start to night. Lotta people moving and singing along (which is always good to see). Priest then went into Heading Out to the Highway. This is when I knew I was in for a treat. I was losing my mind man. I shouting along like I haven't in awhile. I wasn't expecting such a classic, killer track that early. The crowd loved it too. Oh yeah, the band was phenomenal. Halford sounded top notch and put everything into his performance. Faulkner was just a treat to watch (Although I was on Sneap's side of the stage). Both guitarists kept things tight and didn't seem to miss a note. They were the driving force of the night for sure. They were always "leading" the music it seemed. Sneap moved a lot and looked very confident in his playing. Ian Hill even moved to the front of the stage at one point so Halford could do that lean n' sing move that frontmen like to do. And you know, Scott Travis did a good job. The sound mix was tight. Hill was louder live than in studio and Halford was clear as day (to me he was clear atleast, but I also wear earplugs to shows so I can filter out all that bass).

After Heading Out to the Highway, they went right into the Sentinel. Truly a magical heavy metal moment. I never thought I'd hear that live. And they did such a good job with the intro. Other stand out heavy as nails songs they played live were: Take These Chains, Out in the Cold, Traitors Gate, Halls of Valhalla, and ESPECIALLY Victims of Changes into All Guns Blazing. Just wow on those last two. Victims of Changes WAS heavy and spellbinding live. Just wow. And do I even need to mention hearing Rob on Halls of Valhalla live? It was nuts.

And yeah, the only downsides of the night were Starbreaker, Steeler, and Tyrant.

A great Heavy metal show through and through. If I could go to shows like that every weekend, I'd be happy! Here's a handful of the passable pics I took (I don't take a lot of photos live): 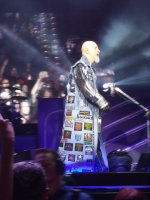 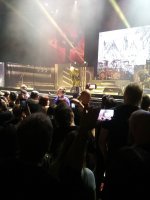 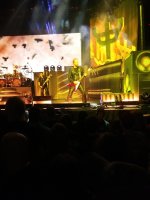 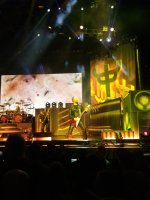 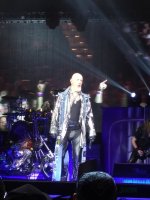 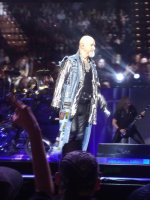 My jacket for the night: 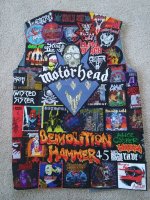 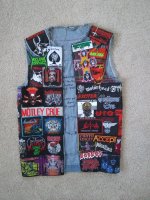 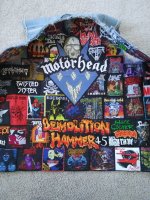 Rob watching the television rather than reading lyrics from the teleprompter??????

Joking aside, we all miss Ronnie.

There's an older gentleman at work I talk to about heavy metal from time to time, or whenever I see him. I told him I saw Priest last Thursday and he asked how KK and Tipton played. I had to break the news to him lol

He's told me before he saw them at the US festival in either 82/83. Super jealous.

Priest dusted off one more deep cut during this tour


Hot Rockin' is the song! And it seems they removed Killing Machine from the setlist (not played on the last 2 shows).

So I just found the entire priest Halford era catalog barring Redeemer of Souls and Firepower on amazon for $115, needless to say I bought it in a heartbeat

Kalata said:
Priest dusted off one more deep cut during this tour


Hot Rockin' is the song! And it seems they removed Killing Machine from the setlist (not played on the last 2 shows).

Man, I'm super excited to see them in two days, but I gotta say:


The songs they're dusting off for this tour would be some of my last picks from their respective albums.