Today I found a disturbing image in a book that maybe could be the main reference for Derek Riggs to make "The Clairvoyant" painting.
Derek says in his book that : "It was about seeing future, so I thought, past, present and future. And that Roman god, is it Janus that has three faces? It has to do with passage of time"

Well Janus had 2 faces. He's the God of beginnings, gates, transitions, time, duality, doorways, passages, and ending. According with Derek it's about time. That's ok.

I remember that Bruce said in some interview that he talked with Derek about ideas for the cover of the album. He showed some prints that Gustave Dore made for the Dante's Divine Comedy. The Inferno, purgatory and Heaven. Perhaps Derek made his own research and saw what I've seen today. It's the folio 48 from the Codex Altonensis (14th century). We can see Lucifer with 3 faces. I don't know what it means that illustration, I think it's about how the traitors are treated in the Inferno. I think it's painted by Botticelli.

From left to right: The Clairvoyant painting / Janus and the concept of time / Traitors in Hell are eaten by a 3 faces Lucifer. 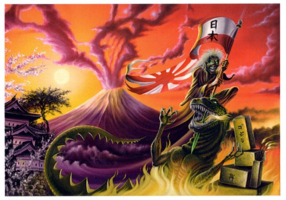 I enlarged it and tried to make it look good.
This is my first attempt.
I wish a high res version did exist but it's not easy to find an available book. 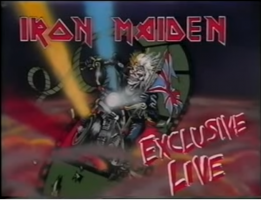 This is from an old tv broadcast

IronCarnage said:
Has anyone got any scans of these?
Click to expand...

I have the original poster of this Eddie:

It’s not Eddie, it’s Lucifer. But what about the little head laying at its feet?
forum.maidenfans.com

I promise I'll try and get it sanned in this year.

I've not been able to find good scans of these two.

I have the Duel truck, Eddie, in very hi-res and without any type. I'm not sure if I sent it to you already. Let me know when you get a chance.

Lord of Wolves 78 said:
I have the Duel truck, Eddie, in very hi-res and without any type. I'm not sure if I sent it to you already. Let me know when you get a chance.
Click to expand...

I think you sent me a magazine cover XD

IronCarnage said:
I think you sent me a magazine cover XD
Click to expand...

Here you go. Here's the Duel Truck Eddie without any type.