The first match-up is pretty brutal — Iron Maiden’s second-best album vs. Metallica’s very best album. Both records are truly excellent, so any outcome here would be understandable. I had to go back and re-listen to both of these to be sure how I felt. Powerslave’s weaknesses are a bit nitpicky — the weak doubling of the guitar melody for the vocal line on the verses of “Aces High”, the good but unremarkable instrumental “Losfer Words”, and the weak chorus of “Back In The Village” are the main chinks in its armor. I’m actually a big fan of “Flash Of The Blade” and “The Duellists”, unlike some others, so those weren’t problems for me. Then you consider Master Of Puppets, and its weaknesses are...well, there aren’t many. “Disposable Heroes” maybe gets a little repetitive, and the vocal lines on “Leper Messiah” are a little one-dimensional. Outside of that, my god the riffs and solos are so consistently great here, and the nuance and dynamics in the songwriting are just stunning. Powerslave shows this sort of finesse on maybe half the album, while Master Of Puppets shows it on literally every track. And those big, epic guitar harmonies that show up multiple times on the Metallica album are just killer. Again, both albums are excellent — that’s why I nominated both of them. But in the end there must be a victor, so congratusorrylations Diesyn DJer Jollinfed Srfickie’s The Midmatic DissaapannonFTBlashman, but I have to go with MrHickjerFTBieser PotomoftheFlashDragonus’s Whorianaxsrfmaticnightman’s choice here. Winner: Metallica

The second match-up is much easier. Rust In Peace is 2/3 masterpiece and 1/3 not quite, while British Steel just isn’t very impressive at all outside of a couple of tracks. Sorry, Yakindotic86, but Dieskarl FTBlacknight’s Whoozardflashaapiallinaxman’s nominee takes no prisoners and isn’t taking any of your shit. Winner: Megadeth

Feel almost bad voting for Puppets because Powerslave is a really great album (Top 3 Maiden for me)and it contains some of my favourite Maiden songs ever with title track and ROTAM but Puppets is Metallica´s finest hour and I won't take many albums over it (Maybe only SIT and Operation:Mindcrime)

Powerslave dips into a valley midway through, while Puppets is consistent throughout. The highs on both are comparable, but Puppets has no filler to my ears, so it gets my vote.

Rust in Peace destroys almost everything Priest has ever done. It’s an assault, while Priest is a whimper - and I like quite a bit of Priest’s stuff.

Puppets is better overall, even though it pains me to vote against Powerslave (but not too much cause it’s obviously gonna win).

Rust should either win the whole thing or place in the top 3. Easy vote against another 50/50 Priest record.

As I said before, I'm not a big fan of Master Of Puppets as a whole album. Powerslave on the other hand is a fantastic album..., not to mention that it contains four of the best heavy metal songs of all time.

British Steel is one of the best albums of Priest imo (with a lot of classics for the band and every song is good-to-great). I like it more than its opponent (which also has classics like Hangar 18 and Tornado Of Souls) - as a whole piece too.

Sounds like lyrics from a Manowar album. But Manowar is nowhere near being in the top 16.

Just a reminder that @Perun nominated this album:

Staff member
I have no regrets.

Detective Beauregard said:
... while Priest is a whimper
Click to expand...

Finally decided to vote Powerslave. It’s just a perfect metal album. So is MoP, but I’d rather hear Maiden’s record overall. And it’s winning anyway so I don’t really have any qualms.

And obviously Rust in Peace. 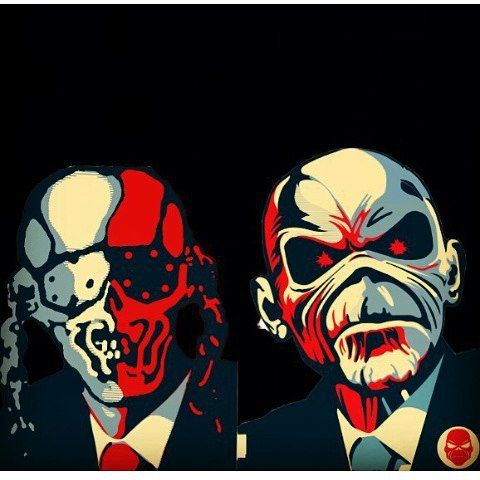 LooseCannon said:
Sounds like lyrics from a Manowar album. But Manowar is nowhere near being in the top 16.

Just a reminder that @Perun nominated this album:

No it doesn't : Manowar does not believe in "coincidences"!

Sad to see Master Of Puppets go when a number of far lesser albums remain in the GMAC, but at least it fell to a worthy opponent.

Powerslave is great (at the beginning and end), but I'm not eager for it to beat Rust In Peace.