Looks like the Enslaved and Satyricon survivors ain't happening, right?

Staff member
I'm getting a head start on preparing for the next installment of Metal Essentials. Looking for feedback from everyone else on what should be included, any changes people would like to see on the game format, etc. One thing I've observed with the current game is that people aren't interested in albums they aren't already familiar with and anything that isn't metal (with some hard rock exceptions). The solution to the second problem is easy: everything in the Metal Essentials games going forward will be Metal (with some exceptions made for "grey area" bands like AC/DC and Motorhead). For the first issue, I still want to include some lesser known albums but I'd like to get some feedback about that. If people are even interested in using the game to discover new music.

With that being said, there are a few options for the next game. One is to do a deep dive into NWOBHM. The big names like Maiden and Saxon would be included, but we would also look at Praying Mantis and Angel Witch. Here are some albums that could possibly be included:

Iron Maiden - Iron Maiden
Def Leppard - On Through the Night
Samson - Head On/Shock Tactics
Saxon - Wheels of Steel/Denim and Leather
Angel Witch - Angel Witch
Witchfinder General - Death Penalty
Diamond Head - Lightning to the Nations
Tygers of Pan Tang - Wild Cat
Metal for Muthas
Battlezone - Fighting Back
Demon - Night of the Demon
Fist - Turn the Hell On
Girlschool - Demolition
Grim Reaper - See You In Hell/Fear No Evil
White Spirit - White Spirit
Venom - Black Metal/Welcome To Hell
Hell - Human Remains
Praying Mantis - Time Tells No Lies
Satan - Court In the Act
Tank - This Means War
Urchin - Urchin (unofficial compilation)
Obviously a lot of these are very obscure and this would definitely be more of a music discovery game. As some of you might already be able to tell, the year an album was released/recorded is less important than the band being part of that early NWOBHM scene. For example, Human Remains wasn't recorded until this decade, but they were an active part of the NWOBHM scene and many of the songs on that album originated from their days as a club band. I would probably cut it down to being closer to 8 albums, instead of the 16 we have going now.

An alternative option is to continue doing games based on periods of time in Metal. For the next game, I'm thinking focusing on just 1980 and 1981 because there is a ton of material to pull from in those two years alone. Here's an idea of what you would see:

Ideally we would just run both games and leave the NWOBHM off the 1980/1981 game to make room for other albums but I don't want to run the NWOBHM game if it's only going to get a few voters. So let me know what y'all think and what sounds interesting.

Will do more thoughts when I’m off work, but I say a max of 1 album per band is required

Ok so here are my thoughts on how to improve the format, but I will state that I quite enjoy these games when I have time to actually listen to the album.

1. Album Limits
As I stated a limit of 1 album per band is what I feel is the best solely due to the vast amount of albums we could pick and having multiple albums from a single band in a small game doesn't make it entirely fair for other bands while allowing for more variety, that being said the combination of two shorter albums as done with Rush is something I quite like.

2. Match Ups
Personally I feel like all the album match ups in the game should have the same number of song match ups. This will make the games consistent and If we combine albums it allows for larger match ups. For example say band A has two albums in the range of the game, one with 8 songs and another with 10. they could play band B's two 9 track albums as a pairing. It would lower the number of overall match ups but allow for more albums to be chosen.

3. Match Up Selections
I personally feel like some match ups need to stay consistent no matter what. First being that the album openers must always face each other, same with the closers. Second If we aren't following the album order then the singles should be face each other and maybe the albums ballads as well. Personally I prefer album order with maintaining the opening and the closers as match ups.

I'll just drop here what I wrote in the Tom Waits Survivor thread...


JudasMyGuide said:
I second that [moving all this stuff into a commented discography thread]. I've already said that I have quite the trouble voting in this particular Survivor in general and I don't even feel very "Survivor-y" - I think I burnt out and ended the Dream Theater Survivor right after BC&SL - don't even recall whether I managed to comment on ADTOE (which is one of my favourite DT albums to boot!), the Steven Wilson Survivor managed to burn me out before the first album was over...
To be honest, I still kinda hope there will be an another (last?) Opeth Survivor when the new album drops, because the Opeth Survivor was something special (and it made me to collect the contributions in that single document) and I would like to participate this time - I might even be very quick at that, 'cause in the meantime I think I half-memorised most of the songs by heart, but other than that... no, I don't think I want to participate in any Survivors in the foreseeable future.
Which doesn't mean I don't want to discuss discographies - in fact that's something I always wanted to do. So I'd propose turning this misbegotten abortion of a game (sorry, but you know it's true) into a passionate discography-discussing thread and leave it at that.
Click to expand...

I'm in for Opeth, as always.

Nobody cares about survivors anymore.

I know you're pulling my leg, Collin, but for those who've really never heard of Andy Sneap & Martin Walkyier & Co.'s fantastic band:

You never knew what Andy Sneap used to do 30+ years ago? Seriously?

Magnus said:
You never knew what Andy Sneap used to do 30+ years ago? Seriously?
Click to expand...

You must be the expert. I did not know.

Collin said:
You must be the expert. I did not know.
Click to expand...

I suppose it's my age, not my expertise. Sabbat was a fantastic, truly original, one-of-the-not-so-many-really-good-European-thrash-bands band I discovered in, er, 1990 I think (but I'm not sure. Give or take a year.)
I got the feeling some people nowadays seem to know Andy Sneap only as a producer and Judas Priest's touring guitarist; some know him from Hell as well, but to me he'll always be Sabbat's guitarist first and foremost.

On the off-chance that there would be enough people interested in participating in a survivor again, I think a Tool survivor is something that could have potential. The new album is out, and with the small discography, it wouldn't be a super long game that would drag on forever and cause people to lose interest. Ghost and Alestorm both have small discographies as well and those survivors went over pretty well.

It just sounds like flogging a dead horse to me. 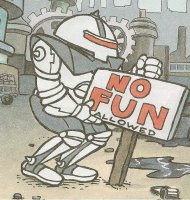 Magnus said:
I suppose it's my age, not my expertise.
Click to expand...

I heard of Sabbat, but I never actually listened to them. I’ll watch the vid you sent later today.


Lampwick 43 said:
On the off-chance that there would be enough people interested in participating in a survivor again, I think a Tool survivor is something that could have potential. The new album is out, and with the small discography, it wouldn't be a super long game that would drag on forever and cause people to lose interest. Ghost and Alestorm both have small discographies as well and those survivors went over pretty well.
Click to expand...