We have more than 0.1% of the population getting tested positive daily now. For example, Estonia has around 1.35 million people and last night there were over 1500 positive tests. My question is, how do they not run out of people already? It feels like every Estonian has tested positive already.

Saapanael said:
My question is, how do they not run out of people already?
Click to expand...

The trick is to make more new people than dead people

We have about 1600-1800 new cases daily for a population of roughly 7 million. Most of the people I know have already had Covid, including my whole family, most of my colleagues and friends.
It appears to me that everyone is bloody tired of restrictions and because a lot of people have already been through it, nobody cares. Our restaurants, cafés, and entertainment centers are going to open on Monday and kids have been back to school for a couple of weeks now.

It's the opposite in my family. Nobody wants to have it (and probably did not have it).

Many in my country (where not?

) are tired of restrictions. There are a lot of people wanting to end or change matters. They are a minority though and I don't agree with most of their reasoning. Most of the time they do not seem to care for the elderly or vulnerable in society. They advocate for freedom and benefit for themselves, in essence. Their reasoning and actions divide society, in people who care about vulnerable and people who care less.

Primary schools are open though, and others will open soon as well. There are many different measures.
Last edited: Feb 28, 2021

Staff member
Just got a text that I got a vaccination appointment for tomorrow, yesssss. Dunno which vaccine though.

I got my first dose today. Yay!

Night Prowler said:
Dunno which vaccine though.
Click to expand...

The one made of heavy metal and dying fetuses, obviously.

Any optimism around needs to come with a serious amount of patience. Oslo is now tightening the restrictions.

Today's contribution to motivate us who live here came from the mayor of Molde, a town of 30,000, who more or less is blaming us in Oslo (who are living under the strictest lockdown regime in Norway) for the fact that they and others need to live with restrictions.

Without thinking about the fact that not only is his town equivalent in size to one small district within Oslo, but that in the time he needs to drive his car to his nearest neighbour town, someone starting in Oslo could reach any one of 10 towns larger than his. What a wanker.

Dr. Eddies Wingman said:
Today's contribution to motivate us who live here came from the mayor of Molde, a town of 30,000, who more or less is blaming us in Oslo (who are living under the strictest lockdown regime in Norway) for the fact that they and others need to live with restrictions.
Click to expand...

This argument does carry some weight for countries with rural zones less developed than norwegian ones (which is most of the world btw). Govts confine people to the counties, a metropolis is a county and so is some village. It's more or less an unwritten law that whatever country has, exists in the capital city. While less developed village counties are lucky to have shops and pumps operational so they don't need to travel 30 miles out to get something.

Btw in Croatia in last 35 years meaning going even back into ancient Yu times, the govt tends to inflate the bureocracy machine so they have enough aparatchiks on the govt payroll when elections come. Yu as a nominally communist country already had a huge state-level machine, while contemporaries made sure that size also trickles down to the smallest local levels. The subdivison of Croatia, is bat shit insane :

We have muncipalities with 130 people. The local economy cannot ever hope to pay the costs of running the municipality for 130 villagers.

So in pandemic days, confinement struck hard. There is nothing more in those municipalities than you can see in an American road movie when they stop in the middle of nowhere to get some gas and food.

Our 2021 map with 352 municipalities (the one with the smallest amount of citizens is Schiermonnikoog, 947 people): 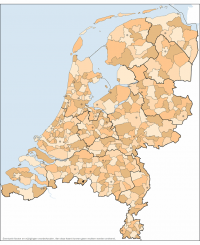 Me too. More than 6 probably.

Staff member
Hopefully I'll be in one of the first groups of the second phase of vaccines. Not sure when that is, but they've indicated they're going to do it by age group rather than risk profession or the remaining clinical vulnerabilities not already covered by the first phase.

I got the same. High five!
(24 hours after the vaccine, my arm hurts like a mf.)

It's stinging for me too. We should exchange reaction updates.

Our Czech co-worker in Plzen has recovered, but he told us they're going into even stricter lockdown now as Czechia is seeing another surge in cases, possibly even worse than the last one.

I must say I have mixed feelings these days. I'm tired of the restrictions we live under here, still I'm aware that those restrictions contribute significantly to the comparably low death numbers we've had in Norway. And that many of you on here are living under stricter lockdown regimes than I am and haven't even had a pause from it. I shouldn't complain. But I want to complain.

Ariana said:
I got the same. High five!
(24 hours after the vaccine, my arm hurts like a mf.)
Click to expand...

My Mum had a week's worth of flulike symptoms and a painful arm after it.

Brigantium said:
My Mum had a week's worth of flulike symptoms and a painful arm after it.
Click to expand...