Can this still be real or just some crazy dream?

Onhell said:
My girlfriend woke me up punching me in the shoulder. Obviously startled I just said, "Ow! WTF? What got into you?" "NOTHING!" um... ok, so I went back to sleep. In the morning I asked her again and she said, "I dreamt you cheated on me." "oooh, that classic. You ARE aware it was a dream, as in, not real." "YES! It still hurt." "In that case... I'm sorry for fake cheating on you in your dreams." "Thank you." "Was she hot at least?" "HEY! Don't push it!" "I just want to know if it was worth getting punched." "Dumbass."
Click to expand...

The boyfriend once kicked me out of bed and told me to fuck off when I tried to get back in - all without waking up. In the morning he was puzzled to find me on the sofa with a blanket and enquired "what on earth are you doing out here?"

No a dream btw - this really happened

Staff member
Sounds familiar. P often lashes out and shouts in his sleep, and once leapt up and almost attacked me when I was walking upstairs - he was sleepwalking and thought I was a burglar.

Brigantium said:
Sounds familiar. P often lashes out and shouts in his sleep, and once leapt up and almost attacked me when I was walking upstairs - he was sleepwalking and thought I was a burglar.
Click to expand...

Flashbacks to his time (re-enacting) in the trenches?

LooseCannon said:
Flashbacks to his time (re-enacting) in the trenches?
Click to expand...

One of my exes had horrible nightmares about her time overseas, sucks not being able to do much else than wake them up, and at times it's worse as they're disoriented and freaking out.

LooseCannon said:
Flashbacks to his time (re-enacting) in the trenches?
Click to expand...

This pre-dates WWI re-enactment. And no, just night terrors and fear of burglars.

Brigantium said:
This pre-dates WWI re-enactment. And no, just night terrors and fear of burglars.
Click to expand...

Update: She has no clue what that was about. Best of all, I am no longer under any obligation of procurring said marshmellows.
Last edited: Jun 2, 2020
S

I had a damn strange dream. One half of it consisted of me waiting for passing trains and running across the railway just as they were about to take off from their stop. I wanted to get the timing as close as possible without getting hit. On two occasions, I had such close calls that the train passed centimeters behind me. I thought: “half a second later and I would’ve lost a leg.” Trains are a recurring element in my dreams but I would never run in front of them in real life. I think the mass of a train is intimidating.
The other half was just balls-to-the-wall weird. I became part of a dark and eerie cult that practised something strange but I can’t recall what it was. There was blood and filth everywhere and I felt endangered. At one point, there was a dude with a really big and red head that was about to explode. I eventually learned that it was in fact a film set and all this cult stuff was part of the shoot. Somehow I knew that it was going to be a really shitty movie by a director who was infamous for making bad horror flicks. My fear dissipated.
There was a brief scene where I sat behind a table with a Ukrainian girl I met while I was in Czechia. She wore an outfit of black and white and I told her it looked nice. She blushed and we sat there in quiet like teenagers who are too shy to say anything to each other.
S

My band was supposed to be the supporting act for Judas Priest but we didn’t know what we were going to play and that made me really nervous.

I was on the edge of a cliff with my mother and brother, I think. I was sitting a few meters away from the edge but my mother was sitting right next to it and I was terribly afraid that she would fall down what seemed like a 100 meter drop. But when I looked over the edge, I saw another plateau just a couple of meters below us, so the fall would not have been dangerous. I jumped down onto the plateau and tried to climb back up without assistance. Suddenly, there was a whole bunch of big strong guys on the upper level, rooting for me to climb up. It was really difficult but I managed to get up there and they were all like: “Yeeeah, Saap, you the man!”

I had been hiking in the mountains with some friends and we were in a hut where we had to spend the night. While sitting in the common room, someone said Megadeth would be playing live shortly. I decided to wait there and watch Megadave and while sitting around, I ended up having the most interesting conversation with Testament's Chuck Billy. Lovely fellow, we exchanged recipes for marinated peppers.

Ariana said:
I used to dream the same dream very often when I was a child. In my dream, I used to sit on a small wooden stool and I jumped off the balcony with it. I knew that if I coughed or sneezed while falling, I would not be hurt. I think I had this dream dozens of times.
Click to expand...

I remember a recurring dream I had as a child. At the end of every dream I walked through a door where a gorilla wanted to grab me. And then I woke up.

MindRuler said:
I remember a recurring dream I had as a child. At the end of every dream I walked through a door where a gorilla wanted to grab me. And then I woke up.
Click to expand...

Maybe it was Ishmael trying to drop some knowledge on you.

I often dream that I'm suffocating and some dark figure tries to pinche my throat.
Then I wake up for a moment, fall asleep again and the dream restarts until I wake up again and so on.

Update: She has no clue what that was about. Best of all, I am no longer under any obligation of procurring said marshmellows.
Click to expand...

Reminds me of a joke.

Last night I dreamt I was eating a gigantic marshmellow.
When I woke up, I found out my pillow was gone.
S

MindRuler said:
Reminds me of a joke.

Last night I dreamt I was eating a gigantic marshmellow.
When I woke up, I found out my pillow was gone.
Click to expand...

I like this joke. It plays on the false “Internet fact” that the average person swallows 8 spiders in their sleep every year. 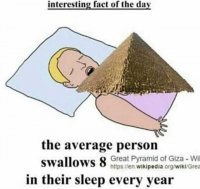 I was in the mall with my grandmother and little sister. We needed to get from the third floor to the first floor.

We went to the elevator, which was a narrow wooden plank hanging from the ceiling. It was in the middle of a large empty space, just like in the real world mall. I told them I don't want to use it, because of fear of heights, but we still did.

To use the elevator you had to swing, kind of like in a hanging tire swing? except I stood up. So I began swinging, it took a very long time (120 floors), and extra stressful. I told them to shut up multiple times, because I couldn't focus.

At the 60th floor, I saw other plank-swings below me. They wouldn't hit us, but there were so many and I was having an anxiety attack. At floor 55 my body broke, and I slipped. I grabbed on to the edge of the plank but I lost my grip and began falling.

Luckily, some man from the Aroma café at the first floor caught me. We then had to make it to our car in the parking lot, except there were bad people trying to stop us, or something. But we did it.

After some time another dude arrived with my grandma, and later with my sister. We said thanks and got in the car.

Had a couple of really loopy ones. In the first one, I could've sworn I was awake. Basically my GF and I were dying as we laid in bed and we knew we were dying. My GF kept going on and on about how "interesting" and "Fascinating," the process was. I had my life flash before my eyes and then it was Simpson's episodes then just.... white.

The next dream I was in an old Mexican Church, like... 16th century old, but the event at the church kept changing or flowing, actually, from a regular mass to people in some office watching a video of a guy disproving how Jesus could've survived a gunshot. Yup. Jesus got straight up SHOT... with a GUN, and this "scholar" was showing how him not only surviving it, but having no wounds was BS. "I'm sorry folks, but you get shot, you get knocked back, you don't just stand there, much less unscathed!" Then gones on to ridicule the ancient historian who wanted to excuse it as a miracle a la magic bullet.

I noticed my mom was in the room and then she said, "well, got to get to the wedding procession," and I turn and two people I've never met before are sitting in an 18th century carriage looking at me blankly. I just walked out, no congratulations, no hello, just.... left. My mom walks out head down followed by a bunch of folks. Then the couple walks out and starts having picutres taken. They start dancing and the groom starts giving the bride instructions, "Ok, now SURPISED! Good! Now, COY! Excellent!" the bride makes faces to match the emotion as the dance and twirl and as they do this... she is getting taller. As I'm shocked by this I put my phone down in one of the pews and my nephew steals it to go take pictures of his own. Then I wake for real.

Staff member
I dreamt I was at an Iced Earth gig in a really small pub, and Stu Block had a nervous breakdown live on stage and had to be ushered out. The support band came on and they were really boring.

Brigantium said:
I dreamt I was at an Iced Earth gig in a really small pub, and Stu Block had a nervous breakdown live on stage and had to be ushered out. The support band came on and they were really boring.
Click to expand...

Was the support band Schaffer doing a lyrics-to-music readthrough of IE songs? Now that's a nightmare.