Haven't seen many of these threads in recent years, but then again I haven't been around as often. At any rate, even with a little over a month to go for the year to end I found myself reflecting on my life since I came back to Mexico.

What I have gotten done:

Even before I got here my goals were clear. Work at the same language institute as my brother and have my own home. That's it. I accomplished that fairly quickly and two years in I not only work at the same institute I have taught in all their programs and all levels except advanced. I am certified to give/grade oral and written examinations for a B1 proficiency level. I also got a TKT (Teachers Knowledge Test) certification which allows me to teach English anywhere in the world. I have also been hired by the state University as an adjunct. All in all let's say initial expectations have been well surpassed.

On a personal note, as mentioned in other topics I am at peace, which oddly is hard to get used to. Sometimes I WANT to be angry or frustrated and am unable to. just last week I marveled at the fact I was doing NOTHING and enjoyed every second of it. Just... sitting on my couch not listening to anything or watching anything, not even thinking... just existing and loving it. REALLY odd, I used to fidget a lot and get bored easily, now... I just am lol.

What I did wrong.

I failed miserably at being a high school teacher. We all suffered, both the students and I. It was straight out of a Hollywood nightmare with no happy ending. Just shitty kids with shitty attitudes who I was never able to reach or teach.

Even though I am at peace and everyday things no longer bother me, old triggers die hard. I am still unable to spend more than 2 hours with my mother, before wanting to strangle her and I have snapped at my girlfriend when she unintentionally touches a nerve an ex of mine has fucked up. I need to work on both of those.

What's next/What I can do better.

I want to become a faculty member at the university and start working on a Masters. I also need to be more organized with my paperwork and deadlines.

I feel the need to make my classes more dynamic. I'm VERY old school, notes and lecture type of guy. I got lots of jokes, so they're not boring lectures, but both, the language institute and the university, want us to be more interactive with the kids. It's hard for me, but I'll work on it.

I need to continue letting go of old traumas and pain. I hate it when I snap, specially if it is unfounded. Going to the next retreat this Saturday, curious as to what I discover now.

At any rate, like I said, I know it isn't exactly the end of the year, but my semester is nearly over and I'm already not posting as much as I used to, between business and leisure trip as well as just not being as connected in general I figured I post it now. Also gives anyone who wants to post plenty of time to think about their year.

And you're still looking for a penfriend, aye?

CriedWhenBrucieLeft said:
And you're still looking for a penfriend, aye?

Onhell said:
I also got a TKT (Teachers Knowledge Test) certification which allows me to teach English anywhere in the world.
Click to expand...

I've been thinking about getting that too for some time now. What's it like? Isn't it divided into modules?

Ariana said:
I've been thinking about getting that too for some time now. What's it like? Isn't it divided into modules?
Click to expand...

Yes, three of them. You can test on each separately, but it's not that bad to do it in one go. You can find mock tests online with answer key. A classmate of mine and I spent a few weekends testing ourselves with each module. They look for very specific language (logic) in certain sections which seem counter intuitive. It worked as I got a Band 3 (out of 4) in all three modules and she actually managed a band 4 in the module that had to do with logistics of the classroom and planning, I forget the exact names of each one.

Staff member
Got into anxiety.
Finished uni.
Got a job.
Saw Dark Tranquillity live.
Saw Scorpions live.
Visited Bulgaria.
Saw Sabaton, Judas Priest, Tremonti and Iron Maiden live.
Became full MaidenFans moderator.
Visited Romania, Moldova and Ukraine.
Fell for a married woman.
Got back to uni.
Got into even worse anxiety, not because of the previous 2 things.

Hope I didn't miss anything.

You went back to uni.

Staff member
For a terrible moment I thought you'd missed 'married woman' out of this. But you did forget something:

How could I forget the married woman thing when I'm constantly reminded of it by a guy who got really emotional when Bruc(i)e left?

I'm gonna stay on the personal level. Wifey's six months pregnant. That's pretty much all the news I need for this year. Also, we got our first flat we really own (mortgage, but still). My parents finally accepted our conversion, it would seem. I finally succumbed and got both Netflix and premium Spotify. And I finally opened the Malazan Book of the Fallen. Also, I kinda re-discovered Kamelot and Skynyrd.

It's been a beautiful year alright.

99% it’s a boy. Though the Pythons would say 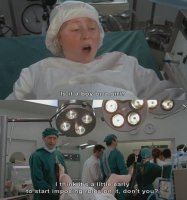 Night Prowler said:
How could I forget the married woman thing when I'm constantly reminded of it by a guy who got really emotional when Bruc(i)e left?
Click to expand...

2018 has been a big year me I suppose. At the start of the year my main aims were to finish my PhD, get a job and move out of the house I was in at the time. The start of the year wasn't great as I was up to my neck in finishing the PhD and progress was slow. I was also unhappy in my old house and not speaking to the people whom I was sharing the house with. Working insane hours helped me avoid them but it was a situation I'd have rather not found myself in. The job search was slow and it was difficult to even find something I could apply for. I did get an interview in mid-February, and again at the same place in April, but I could tell that I wouldn't be offered the position. Work on the PhD thesis was slow and I realized in February that I wasn't going to submit by my end of April target, which was when my funding expired. As my money had run out I moved back in with my mother in mid-May to finish off my PhD thesis. Fortunately I already knew I would have a short term job in the same place I'd been doing my PhD so I would only be staying with my mother for a couple of months. For about a month before I moved out of my old house I had been gradually moving all my things into a storage unit and ultimately moved out for good on a Thursday morning without saying goodbye to anyone before returning the keys to the letting agent. I didn't feel good about leaving without saying a word but I felt a big sense of relief that I wouldn't be back in that house again and I knew I would never be sharing a house again.

Due to the slow progress of my thesis writing I ended up going on holiday before I had finished. This was my trip to Scandinavia to see Iron Maiden on the Legacy of the Beast tour in Stockholm and Copenhagen! That tour has already been discussed at length but I had a great time visiting two really cool cities, and also had a few beers with @Shadow and @Dr. Eddies Wingman before each of the shows! The weather was really good the whole week but far too hot for my liking, especially when I was on an overcrowded train with no air conditioning between Stockholm and Copenhagen! As I was in Scandinavia at a time when I was no longer being paid for my PhD I did a good job of running my bank balance down, especially as I was paying by card and incurring the currency transaction charge. Oops.

I finished my PhD thesis in mid-July and started my first ever full time job a few days later. I'd had to wait until the last minute for a contract as HR at my university is a pain in the ass. Around the same time I moved into a flat by myself. It's a studio flat in one of the crappiest parts of town but was all I could afford at the time. You get what you pay for and I'm not paying much. Hopefully I can move into somewhere a bit nicer and more spacious soon, but I'll need a longer term job for that. I did have an interview for a job in Cambridge recently but was unsuccessful. Sad!

At the start of October I successfully defended my PhD thesis subject to minor corrections and graduated earlier this month. The second half of the year has been much less eventful and more satisfying than the first few months of the year. It has been good to end the year on a high note so that all the crap I was wading through earlier in the year was worth it or just insignificant now. As tough as things were at times this year I still managed to see a shitload of bands again, met Anneke van Giersbergen and Anna Murphy, visited some cool places and spent a hell of a lot of time on the MaidenFans forum.

In 2019 I hope to get a longer term job to get some stability in my life and move into a better flat. And see loads more bands again of course.

Night Prowler said:
Became full MaidenFans moderator.
Visited Romania, Moldova and Ukraine.
Fell for a married woman.
Got back to uni.
Got into even worse anxiety, not because of the previous 2 things.
Click to expand...

But because of the two things before those?