And what's this? A spoken intro? Taken from an old TV series by the same name? What? This song is about that TV series? You don't say!

...anyway, this one is a lot of stinkin' fun. There's some really fantastic riffage on display here and the energy is absolutely on point. The chorus is a fun singalong and the intrumental section is good. So, it's solid all the way through.

This shouldn't come as much of an surprise, but it's pretty much the definition of a 8/10.

We leave "Children of the Damned" with an awesome Bruce scream, and then, after a cool spoken intro, a really, really great drumbeat ushers us into this cold-blooded classic.

I actually enjoyed this more than COTD this time around. The guitars are great, Bruce sounds great, the chorus is phenomenal, and the build-up is great too. Lots of great stuff. Just not as good as some of the masterpieces this album holds. 9/10.

A clip from the television show breaks into a slower, drum-accented groove before kicking into a more uptempo verse riff. Bruce delivers a catchy, emotive verse. The tension builds throughout an excellent instrument-driven pre-chorus before breaking into a bright, catchy harmonized chorus.

Another round of verse through chorus and we get a great, soaring melodic lead followed by a great solo and an excellent one. Back to the chorus, and then we land softly on a cymbal roll.

This song's a classic for good reason. Not quite flawless, but truly excellent. 9/10.

My favorite song ever, bar none.

Fantastic chorus and good solos, but otherwise nothing special. 8

Nothing special and still an 8? Wow...

A great drumbeat opens the track with a fire, and the guitars sound crisp and clear here - very, very great. The verses are good and Bruce is really showing off his pipes in fine form. The chorus is where it truly hits its peak, with everything coming together to slay the past for good and showcase that this Maiden is better than anything you've ever heard before. The solo section is pretty damn great too. It's the strongest thing we've seen so far. 9

So strong song. The intro is great, but that second intro with the drums is one of the best starts of a Maiden song ever. Clive's hard hits are amazing, very powerful drumming through the whole song (I think Nicko never do that part live as is in the studio version). Golden chorus, fantastic riff and very good pre-chorus too. The solos, especially Adrian's one (which is one of his best, if not the best) are brutally amazing - probably one of the strongest back to back solos in a Maiden song. Love the harmony which Adrian does before the start of his solo. The outro with the drums is really cool. I'm not so sure if the song is underrated, but it is a true (lost) classic IMO - a hidden gem. The fans surely like it a lot. Damn, this solo is beyond amazing. I cannot praise the song enough. 10/10.

This song is the perfect 3rd song for this album, if that makes sense. What a wonderful chorus it has, too. The only thing I don’t really love is the drums under the solo. I don’t really know why, I just am not a fan of what Clive did there. Either way, a solid 8/10.

Iron Brody said:
The only thing I don’t really love is the drums under the solo.
Click to expand...

That's one of the best aspects of the song IMO. 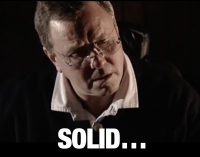 A fantastic song if you ask me. I absolutely love it!

"It started off in the rehearsal room. Our drummer (Clive Burr) wasn't there, he was having a cup of tea, so being a frustrated drummer I started bashing out this simple drum beat at the beginning, and then Adrian started playing this riff. Harry came in and went: 'Wow, what a great riff!' And then we just started" (Bruce Dickinson for Paul Brannigan – Classic Rock Magazine - November 2012)

"You're a prisoner of yourself your entire life! You're always trying to escape from every new situation into another one – which you think is better, but which, in fact, is simply the same, and which used to happen to this guy in every single episode. It was the brainchild of a chap called Patrick McGoohan …" (Bruce Dickinson for Gueneviere circa Autumn of 1984 – Taken from the Metal Rules Webpage)

"Is all about conditioning a person so trapped by what other people say and convention that he can't break out." (Bruce Dickinson for Robin Smith – Record Mirror – February 27, 1982

The opening narration heard on the song is an edited version of a dialogue from the opening sequence from The Prisoner series.

The band got the opening narration from Tommy Vance.

Would you like to know more stuff life this from every Maiden song? Buy my ebook by subscribing here https://www.subscribepage.com/luisma666

In this song, the main one
character, the prisoner, tries to
react to the power of those who him
they watch and patronize life
his and shake their control from
on him.
The phrase “to run rings around
someone ”which is found in the lyrics
is an English idiom which
means overcome / defeat / show
superiority over someone. This idiom has its roots in
19th century British racecourse, where it referred to fast horses
which completed the round much faster than the rest.

Adrian's solo in this song is one of his favorites (the info is from Steve).

The whole instrumental section is one of Maiden's all time best.

Love that drum intro. The riff is killer. The faster verse riff is killer. Pumping, rocking, rolling, and then soaring in the chorus. It’s the kind of chorus you’d expect to hear on the radio, with added fire and beautiful melodies. It’s that chorus that makes this song as good as it is. Triumphant, ecstatic, excellent. 9/10

The Prisoner recently has risen in my IM song rankings. Such a fun tune. I hear the beginnings of 2 Minutes To Midnight in this song, when Bruce sings:
Run, fight to breathe, it's tough
Now you see me, now you don't
Break the walls, I'm comin' out

And Hallowedesque drum rhythm + guitars soloing during solo section towards the end of the song.