Just a joke Terrell, just a cheap knock at Dissident listening to 365 albums last year and giving a lot of them high scores.

I would see Crue in a heartbeat (mainly to see the guitar mastery that is Mick Mars!).

I did more or less ex-tempore move on Friday and drove to Lahti aftetr work (about 2 hour drive) to see Marko Hietala and Sonata Arctica.

I loved Marko's solo album and it was great to see that stuff performed live. Granted, I prefer the lyrics in Finnish and he performed the English versions due to preparing for the European tour, but they definitely worked very well live. Especially Runner of the Railways turned out much better live and Dead March for Freedom, which is probably one of the better turnouts of the English translations anyway, was a huge highlight. Overall, very enjoyable set!

As for Sonata Arctica, I really enjoy their music, even the very debatable recent stuff, and there's some charm in their... almost embarrassing way of doing things. Speaking of embarrassing, Kakko's speeches definitely fall into that category a bit too often. In general, I think that the band is very capable when it comes to performing their music live, but they - or Kakko for that matter - kind of miss the sing-along and crowd-interaction potential some of their songs provide. In other words, they've always been pretty bad at properly taking advantage of their own strong points at times.

Kakkos struggles with higher notes very badly, since he completely fried his voice during the last big tour and whatever he lacks in technique doesn't make things any easier for him. He sounds very good when he actually sings and stays within the mid-range, though.

Anyway, the concert was ok. The new stuff sounded surprisingly good live and overall, the band seemed a bit more energized and focused during those songs. Sonata of nowadays is at their best when challenging themselves: doing those acoustic shows with fresh arrangements or playing either new, generally challenging or very rare stuff. While they seem to be enjoying playing the typical picks, such as I Have a Right (to repeat that chorus), Tallulah and Fullmoon, there's really nothing... particularly exciting or fresh going on.

My Land was a nice surprise from the older stuff. Very good for an encore and Kakko stayed within comfortable range, making the performance very solid and balanced, even if it perfectly emphasize the current state of Sonata, whether one considers it to be good enough or not.

So... yeah. It was worth going and Sonata kind of surprised me with how well they handled the new stuff. They could be so much better with very small tweaks in their approach to their concerts and setlist concepts, but yeah, it is what it is...

As for rest of the setlist, The Da,y which was a staple in last year's set was dropped to make room for Replica, which probably pleased most fans, but I might have preferred The Day, but yeah, acceptable. I can accept Closer to an Animal as a new setlist staple, but Life is pretty lame. I'm not expecting them to play San Sebastian, Wolf and Raven and Misplaced in a row, but one more adventurous addition such as Gravenimage, or even something as wild as Under Your Tree would give their sets some much needed depth and variation and also fit their current style quite well.

Added GNR to my growing list of concerts for the year. Very much ready for round 3

Just saw a beautiful & emotional concert. Not the kind we normally discuss (& not my usual type either). Sarah Mclachlan (Sarah Mac to her fans) is who I just saw. It was a very bare bones "Evening with"; at times just her on the piano (which she made sound like so much more). Other times she had a young musician named Vanessa play cello or acoustic guitar. On a few songs, Sarah took center stage and alternated between electric & acoustic guitars.

Sarah explained the story behind EVERY song she played (including a new one she has yet to record which, for now, is called Wilderness). She spoke of forgiveness, being a parent, how scary the world can be, and the endless cycle of falling in love only to have your heart shattered. She sang about her father (dead 10 years now, like my own) and trying to stay positive and spread that to others. She spoke of staying in a relationship she knew was bad for too long (I can relate).

What I loved most was how self deprecating she was. Always making fun of how depressing most of her songs are! However she states that singing about heartache is very cathartic and gives her joy.

And GOD what a voice! Speaking of voices, during the song Ice Cream she asked for audience participation and I swear EVERY female in that audience sang the chorus! At one point Sarah stopped singing because the audience singing was so loud! That's Austin Texas for ya!

To summarize, don't miss her if you get the chance.

Deftones and Gojira was announced today. I'm probably not gonna go as it's too far. I bought a Megadeth ticket though. I got front row on the side section closest to the stage. I'm really only a fan of Megadeth so I may be showing up for just them. Maybe I'll get into one of the other bands though. Who knows? Very happy with my spot though!

Officially sold my Alter Bridge tickets so I didn't lose too much money as a whole on them. Since my last list update I added two large profile shows being GNR and The Stones. Stones tickets are random and I won't know where I'm sitting until I arrive the day of the show which I think is super cool since the seats could be anywhere in the stadium including the Pit. It will be a great way to celebrate being in the last week of my Practicum. Scorpions I haven't bought the tickets for yet but will more than likely be happening as a grad celebration. I've also toyed with the idea of going to see Skid Row it would be a couple weeks before Sebastian but I'm not to sold on that show. Foreigner w/ Kansas and Europe would also be a cool show but thats in the summer and I'm already looking to have a busy one so I've held off as well. I'm hoping for Alter Bridge and Dream Theater to come around again to do another west coast or canadian run of their current tours so I could see the two of them.

David Gilmour and his wife, Polly Samson have announced a few shows in promotion for her new book, with David performing the music. Thought I'd treat myself to a ticket to the Birmingham, it'll be nice to see Gilmour performing again, especially in an intimate venue.

As opposed to unofficially selling a ticket?

I'm pretty sure that I've heard that question before.

I saw VADER this past Saturday and it was phenomenal. They played a lot of off Black to the Blind and Litany (which was nice). The 4 other bands that played before them were varying degrees of OK. I'll update my grand list of concerts soon with that show and the KISS/David Lee Roth show a few saturdays back. Next up is Overkill/Demolition Hammer/M.O.D. w/ Billy Milano and Exhorder!

Dityn DJ James said:
I saw VADER this past Saturday and it was phenomenal
Click to expand...

I saw Vader open for Testament two years ago. I'm not a fan of their music at all but I suppose they were decent live. I saw two shows on that tour and at the second in Birmingham (@phantomoftheicarus was also there) someone got knocked over at the fringes of the pit early in Vader's set and injured his ankle or something. A group of people surrounded him with arms linked to defend from more pit damage. The ambulance didn't arrive until early in Annihilator's set and Jeff Waters paused the song to let the paramedics take him away safely. It must have sucked to have gone to see one of your favourite bands and missed most of the gig because of an injury sustained early in the opening band.

Black Wizard said:
The ambulance didn't arrive until early in Annihilator's set and Jeff Waters paused the song to let the paramedics take him away safely.
Click to expand...

My ticket to Testament in Manchester arrived yesterday... at my parents house, I'd forgotten to change the delivery details. Fortunately they're sending it up soon.

Missed a local gig in town earlier this month, one of the bands I'd seen before back in Birmingham because as they were a friends friend's band that I was dragged along to. Was gutted to have missed it, but I wasn't feeling too well and the weather was awful.

Got tickets for the Genesis reunion tour, at the O2 Arena in London. They were expensive, and they were right at the back. But I never got the see them live, I was only 9 when they did the last tour, and I'm going with the mother who is a massive fan.

Show was 3.5 hours away, I'm in a practicum and would be getting home at 3am for a day which ended up being 7:30am-8pm straight through. I was very unhappy with having to sell them but it was for my own sanity. Hopefully they will do a Canadian tour soon.

The Dissident said:
I'm in a practicum
Click to expand...

What is a practicum?

Black Wizard said:
What is a practicum?
Click to expand...

Isn't it another word for corona quarantine?

KidInTheDark666 said:
Isn't it another word for corona quarantine?
Click to expand...

Saw Tool last night in Spokane. My 3rd show in total and 2nd on the Fear Inoculum Tour. Amazing as always. I had a really good seat. I wish I had showed up a little early as I wanted to get the event shirt but the shirt lines were actually longer than the ones at Iron Maiden. Impossible? I think not. There was probably 500 people in one merch line.

The setlist was was amazing. Better than the last one in Las Vegas. I got the exact set I wanted to hear actually. I’ll post in spoilers in case if anyone is going.

I was happy to hear the first US performance of 7empest, Descending was quite the treat and easily my favorite part of the night. Although I’ve seen it 3 times now, Jambi fucking kills everytime.
Brilliant show. Really want to go again in Tacoma, but I don’t think I have the funds. Sad. Weak. 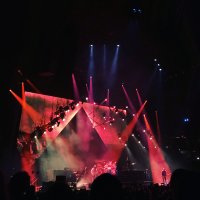