srfc said:
Do you have the Piece of Mind where there is a separate track for the backwards message?
Click to expand...

That's CP32-5109, EMI/Toshiba original Piece Of Mind pressing. Notice something? "Phatoor" is Nicko's reversed Idi Amin impression thingie from Still Life separated into track of it's own. I've seen that Phatoor just recently, while i was listening to FLAC rip of that Japanese pressing...
forum.maidenfans.com 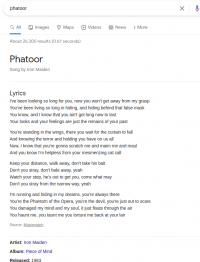 Zare said:
2) CDs get compressed, vinyls do not get compressed. Different product get pressed on either.
3) The so called "black triangle" CDs are sought after because they weren't compressed in mastering, the same product was on vinyl and on CD.
Click to expand...

Why do they still do that though? I thought the loudness war was identified as unnecessary and detrimental like 10 years ago, but:
On the top is TLOTLDR, Japanese CD from the 80's, the bottom is Time Machine, CD from last week

I really can't know for sure.

But as a music consumer, let me tell you I was absolutely bummed by maximum volume level of some devices I had, like Phillips MP3 players and other "dumb" players. If the source wasn't maxed I would hear noises from the ambient over my music.

It's all fine and dandy if you have a DSP in the player. I had it since 2007 on my cellphone and since then I've preferred less loudly mastered albums so I can put the built in compressor on the max and have a slight distortion in my headphones that really benefits 80s Iron Maiden guitar sound. But if you don't have/can't operate/won't operate the compressor, it's a wild ride, mixing 'old' and 'new' stuff with varied avg/max dB levels.

Consumers do not bother with this stuff, example is most popular talk platform of the day, Discord, which doesn't have normalization for all participants in the voice chat. So you have to manually adjust volume of each party. Then someone moves 1 cm from their mic and everything gets fucked again. When I googled this out I saw only 2-3 questions like "why doesn't discord have this" and no one responded with anything meaningful.

So maybe the thing from start of loudness war where everything was about volume levels on the radio is still applicable. I mean you really don't want a silent metal album. If it comes on a playlist after something loud, it will break immersion and you will have a negative first impression.

But if listen to the whole album (as you should!) then it becomes moot
The Holy Grail Martin Birch albums (and vinyl masters of newer ones) are apparently everyone's ideal anyway

Compression is necessary, so is distortion. Analog has by nature a lot of compression and distortion, digital is clean. Clean doesn‘t work with pop music, much less for rock music. Hence: digital compression and saturation. How much one uses is another question. Andrew Scheps, who is (in)famous for mixing Death Magnetic, says his mixed aren‘t loud (meaning heavily compressed) because he has to do it that way, but because he likes the sound.
In the case of Maiden: Kevin Shirley is very analog, and I doubt he uses digital saturation or distortion at all. But he certainly uses analog compressors, saturation, and more of it than on, say, in Jazz. But the brick wall limiting comes in, in the case of Maiden, in the mastering, I think.
Also: SJ sounds very good. Has lots of reverb as well (I’m one of the seemingly few people who generally prefer a more dry sound).

Please elaborate the "analog has by nature a lot of compression and distortion"?

Well, for every piece of gear in analog you get a signal/noise ratio. By pushing the signal, you get more level, but also compression, saturation, distortion. It starts with the microphone, ends with the master tape. Every step on the way adds what I would call “natural distortion”, and some of it is very desirable, tube gear for example, even for classical music.

If I may post something on topic, Maiden enters at number 2 in Album Top 100 in the Netherlands: 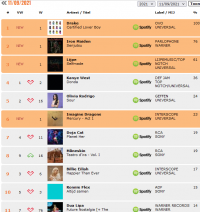 Iron Maiden have scored their highest charting album of their legendary...

Iron Maiden have scored their highest charting album of their legendary 41-year recording career on the Billboard 200 with their 17th long-player ‘Senjutsu.’

The critically-acclaimed double album debuts at Number 3 on the official US chart, one place higher than 2015’s ‘The Book of Souls’ and 2010’s ‘The Final Frontier’, which both peaked at No.4.

Still sold less in the U.S than TBOS, but at least it didn’t plummet like in the U.K.

MindlessPieces said:
Here is a different clip, with a guy that loves vinyl. When he does masters he does a different master for CD vs Vinyl, but he says vinyl is an inferior medium, and he lists many reasons why
1 Narrower stereo image
2 Thinner low end
3 Low signal to noise ratio
4 Harmonic distortion
5 Less transparency on sides of stereo image
6 Sounds worse towards the centre of the record
7 tempo and pitch variations
Click to expand...

All of these things are correct, but a lot of it can be mitigated by good gear and proper setup. Inner Groove Distortion can be made insignificant enough with a cartridge that tracks well enough and setup, although some distortion can occur which are the result of something else, like the vinyl being off center etc. I can widen the stereo image after the fact if I want by scaling back the center channel in a DAW, for instance. The harmonic distortion can sometimes add to the sound, especially with distorted guitars. My PSU has a DSP which clocks the motor and keeps it running accurately as well as a switch for fine adjustment to the speed. I haven't actually been arsed with trimming the speed, but it's consistent compared to when I had a cheaper belt and went without the DSP equipped PSU. When all is said and done, most vinyl rips I make of modern albums sound better than the CD due to less compression (even on DoD, not by a lot though). Vinyl is a very flawed medium, and they don't 100% accurately replicate the sound put onto it like the CD does. A CD plays the sound back perfectly while there are a lot of factors with vinyl which effects the output sound. The source material tends to sound better though and that's what makes vinyl better than the CD counterparts when played on satisfactory gear - The benefits outweigh the downsides. I've gone over to vinyl out of necessity. It is a very flawed format but I'd rather go with that with all its flaws and time consuming ripping/editing than squashed, often close to unlistenable, CDs.


Regarding earlier posts about the dynamic range measurements being skewed due to clicks and pops - If you measure that before you edit them away, then you're just doing it wrong. Vinyl usually does have a wider dynamic range on the source material, but obviously, there's the thing with noise floor and motor noise in the very quiet sections etc.

And yes, there is an inherit distortion in analog recording. When you record to tape you'd get the levels within the sweet spot and then the tape compression would saturate things and make it sound sweeter. It's distortion, but a good type of distortion. Some use saturation plugins to achieve the same result nowadays.
Last edited: Sep 13, 2021

johnglen said:
Still sold less in the U.S than TBOS, but at least it didn’t plummet like in the U.K.
Click to expand...

Many of the arguments over CD v vinyl are foolish, especially from the CD advocates. Why?

You can’t apply scientific arguments to art. As simple as that.

(For the record I have a moderate set up, reasonably good amp and speakers. I have the CD and the vinyl. The vinyl is far better to listen to. I couldn’t explain why, nor would I care to if I could).

Maybe we can just accept that apart from the hardcore Maiden fans there is not much of an audience for 12 min songs.

Combined with the fact that for many people TFF and BOS were not considered as good.... I guess people lost their interest. Although the promotion was special this time around, I guess the last album got a push after Bruce's cancer diagnosis. I mean it is not rocket science after all.
J

Gk1 said:
Maybe we can just accept that apart from the hardcore Maiden fans there is not much of an audience for 12 min songs.

Combined with the fact that for many people TFF and BOS were not considered as good.... I guess people lost their interest. Although the promotion was special this time around, I guess the last album got a push after Bruce's cancer diagnosis. I mean it is not rocket science after all.
Click to expand...

People loved the book of souls.

Anyway does anyone know how much Senjutsu sold in Germany ? 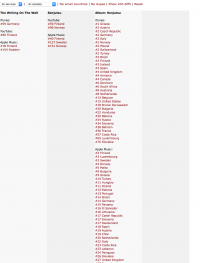 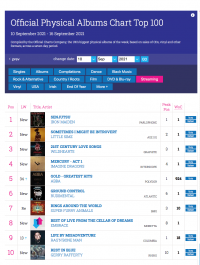 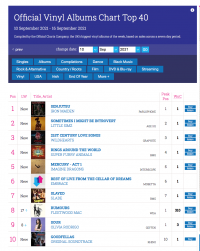