Been discovering Brian Auger's Oblivion Express. Jazz fusion not unlike Mahavishnu Orchestra in places...but also some heavier groovy prog stuff in the mix too. Apparently certain members from Oblivion Express went on to play in the Average White Band.

Staff member
Heard these two songs in Homeland, thought they were cool:

Nice! I saw Stanko live last July at a Belgian festival. Washington, I'd like to explore him more. He is the man at moment.

Staff member
Kamasi Washington is so awesome. Highly recommend his album The Epic. Triple album that’s probably best taken one at a time, but there’s a lot of great playing and variety. His music and playing is very Coltrane-esque.

This footage was recorded for French TV but was never broadcast. It is uncut and unedited ..Filmed in France - looks like The Olympia in Paris to me - with Larry Ridley on bass and Don Lamond on drums.

My god, where did this emerge from? I've been waiting for a Grant Green video for years. This must be the first time most people including myself have ever seen him play properly (for more than the 30 seconds clip on youtube) till now.
Click to expand...

Nice!! They play a rhythm changes tune to open and then they each have their own features with bass, drums and a guitar comping. Grant Green's feature is at 11:48, Barney Kessel's is at 18:50 (I'm Glad There is you) and Kenny Burrell's is at 23:30 (Imagination.) Then they close with the familiar blues theme Blue Mist. Nicely recorded, a very special performance not to be missed!
Click to expand...

Staff member
Great find! Some nice closeups of Grant's playing in these clips. Nice performances of some of my favorite standards in the first clip, Oleo and How Insensitive.

Second clip is good too. It's great to see him working with other guitarists. I have also been getting into Barney Kessel a bit actually. I've got this recording, Lester Young with Oscar Peterson Trio (although it's really a quartet with Kessel on guitar). Some great guitar playing on this.

Staff member
@Forostar and others: have you listened to the “new” lost Coltrane album Both Directions at Once?

I have it Mosh, the two disc version! I heard only four songs yet. I cannot find good time yet to do it better. But I really like it.

There's some really nice melodies and dynamics (rhythm) in the stuff I heard.
Looking forward to hearing the rest.

I have it in my cart but I got it from itunes but haven't had a chance to listen yet.

I also finally picked up a Complete Cellar Door Miles set but also haven't has a chance to listen to it yet. I can confirm that its brilliant shit though.

Staff member
I'm waiting for the vinyl to go back in stock on amazon. Looks like a nice package!

Though still only 29 years old when he recorded Expansions for Blue Note Records at Van Gelder Studio, on Friday, 23 August 1968, Philadelphia pianist McCoy Tyner was nevertheless a seasoned and highly-experienced musician.

Tyner’s professional career began when he was just 15, playing in local R&B bands, but he soon outgrew them. Mentored by noted bebop pianist Bud Powell, who was a neighbour, the young Tyner rapidly blossomed into a major jazz talent. He first came onto the radar of the wider jazz public after he played in Benny Golson and Art Farmer’s groundbreaking band, The Jazztet, in 1959.

A year later, Tyner, then just 21, was recruited by rising star John Coltrane and, as part of the saxophonist’s famous quartet over the next five years, he would help to shape the course of jazz history via classic albums such as My Favorite Things, “Live” At The Village Vanguard and A Love Supreme.

Tyner’s solo career began while he was still with Coltrane and, in a fertile period between 1962 and 1964, he released six albums for the Impulse! label. After he left Coltrane, in 1965, Tyner had a couple of fallow years but eventually landed at Blue Note in 1967.

Expansions was his fourth LP for the iconic jazz label and its title referenced the fact that it was Tyner’s most ambitious solo project up to that point, using a larger ensemble than was the norm, comprising seven musicians. In terms of its personnel, Expansions certainly boasted an impressive line-up. On saxophone was Wayne Shorter, then still in the Miles Davis Quintet, while Ron Carter was also “borrowed” from that group, though he played cello on the session rather than his customary bass. Playing trumpet was one of Philadelphia’s rising talents, Woody Shaw, who had impressed on organist Larry Young’s 1966 Blue Note LP Unity. Playing alto sax (and doubling on wooden flute) was Baltimore musician Gary Bartz, who, later in the 70s, would go onto work with Miles Davis. Completing the line-up was bassist Herbie Lewis and drummer Freddie Waits.

Expansions’ opener, ‘Vision’, is a classic slice of late 60s modal jazz. A propulsive cut, it’s driven by Tyner’s percussive – and strongly rhythmic – piano chords. Above this jaunty ostinato pattern the horn players harmonise a clarion-like series of motifs, before a transition into a swinging bridge section with walking bass. Tyner takes the first solo, juxtaposing explosive left-hand chords with sparkling and fleet-of-finger right-hand runs. As the music simmers down, Ron Carter falls under the spotlight with a dexterous bowed cello solo that uses glissandi effects. He’s followed by blazing passages of improv by the horn players, Wayne Shorter, Gary Bartz and Woody Shaw, though it’s drummer Freddie Waits who has the final say, with a short solo before a reprise of the main theme. ..... 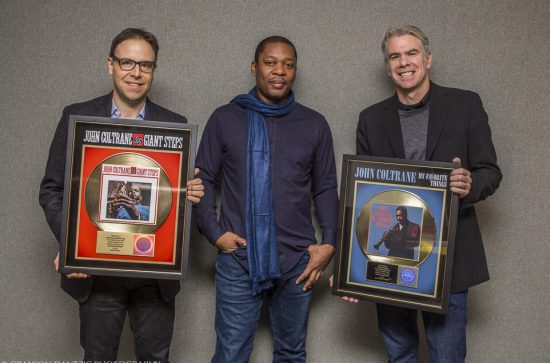 Two of the most lauded albums by saxophonist/composer John Coltrane, Giant Steps and My Favorite Things—both released on Atlantic Records nearly 60 years ago—have earned gold status per the standards of the Recording Industry Association of America, having sold more than 500,000 units.

Gold records are, of course, not an honor often bestowed on jazz albums, which makes this certification a testament to Coltrane’s enduring appeal to listeners.

“It has been a tremendous honor to work with the John Coltrane catalog and estate over the years, and to be a part of this special milestone,” Mark Pinkus, president of Rhino Entertainment, which oversees the Atlantic catalog, said in a press release. “Both Giant Steps and My Favorite Things are two of the most iconic and significant albums in the history of jazz music, as well as Atlantic Records. Rhino will faithfully continue to honor the legacy of Coltrane so that future generations can enjoy his magic many years to come.”

This has been a big year for Coltrane, more than 50 years after his death in 1967 at the age of 40. The posthumous release of his “lost album,” Both Directions at Once, recorded in 1963, was a major event in the jazz world and beyond. The gold designation of Giant Steps (recorded in May and December 1959, originally released in January 1960) and My Favorite Things (recorded in October 1960, originally released in March 1961) only serves to further reinforce his profound legacy.

“The Coltrane family is thrilled to finally see this day come,” Ravi Coltrane, John’s son, said in the release. “We all love these records dearly. Giant Steps was the record that made me want to be a musician myself. On these recordings, John Coltrane’s mastery of the saxophone combines with a fearless embrace of intuition resulting in a spirit of invention that changed improvised music forever. These recordings were ahead of their time, will never sound old and will always remain elevating and enlightening.”

Tasked myself with exploring the catalog of Miles Davis, or that which is on Spotify at least...

The very model of a modern Major-General

Well, unless you have a serious preference for a single subgenre/era of jazz, picking albums at random is as good an approach as anyone

The "general jazz" people begin with Kind of Blue which is indeed very accessible, very tasty, catchy even. The "rockers/fusionists" usually begin with In a Silent Way or Bitches Brew and I admit I really love both.

My personal jump off point were Steamin' (with the Quintet) and Sketches of Spain, then Bitches Brew. I wasn't necessarily hooked, but definitely intrigued. Wish you good luck!

JudasMyGuide said:
The "general jazz" people begin with Kind of Blue which is indeed very accessible, very tasty, catchy even. The "rockers/fusionists" usually begin with In a Silent Way or Bitches Brew and I admit I really love both.
Click to expand...

This is basically what I knew about Miles Davis already - that he made some jazz masterpieces in the 50s, like Kind of Blue, then spearheaded the jazz-rock/fusion movement with Bitches' Brew before getting drawn into the funk/soul of the 70s. That and that his 80s albums seems to really divide people...

I did begin with Kind of Blue (listening right now)....might as well get the ball rollin' with one of the most celebrated albums

but I definitely know I will be enjoying his fusion stuff too!

The very model of a modern Major-General

Why, you don't know that. I'm not saying his fusion stuff is completely unlike anything else in the subgenre, but it's quite unique nonetheless, IMHO. You might not like it at all. Depends on what you appreciate, fusion-wise.

Like, he already has a reputation of stellar achievements in various jazz subgenres (Birth of Cool, for example, which is okay, but I can't enjoy it all that much), so it's small wonder not everybody likes everything.

If you liked the first two Return to Forever albums or anything from that di Meola - McLaughlin - de Lucia trio albums, I'd definitely recommend Sketches of Spain. It's very much in my style, but it's still very different.

Whereas Trane to me is a matter of consistency (that is, no album I even slightly dislike - even Ascension), Davis is more of a hit-or-miss artist. Again, you probably knew that about him already as well.

Staff member
Do you guys want a Miles primer? I have listened to all of his albums as a leader (and most of what he did as a sideman, not much) and know all his different eras well. Picking different albums is a cool strategy too but you don’t want to miss the essentials