I didn't know where to put this (Metalfans forum surely doesn't do it?) but you mods can feel free to move it if necessary.

I have just decided to start try get into jazz. So, what good stuff do you guys (or chicks) recommend?

Staff member
__no 5 has a pretty good taste for this, but I'll try.

Look for some Louis Armstrong.  That's who I think of when I think jazz. My dad has a few hundred jazz albums he inherited; I'll see what he recommends.

I am not that much into jazz, because for my taste it lacks excitement and interesting melodies which stick in my head. I immediately admit that I haven't given enough time and effort to get well into jazz, so to be frank I am a newbie as well. I am curious for no_5's contribution!

Aspects I do like about jazz are the rhythms and the legendary musicians.

This fellow here was surely not the most boring guy of jazz:

I have seen some stuff on television (I rather like watching jazz instead of only listening) and I can recommend his stuff from the Classic Quartet period (1962–1965).

The "Classic Quartet", as it would come to be known, with Tyner, Garrison, and Jones, produced searching, spiritually driven work.

I especially was very impressed how well these guys played together and the drummer Elvin Jones deserves some seperate credit.

Elvin Jones, famous for his innovative and polyrythmic style, was called by Life magazine "the world's greatest rhythmic drummer."  When I saw him I had the idea his drums felt more than just drums, they swam independently and fluently through the rest of the music while he carried it at the same time. Especially that "swimming", this polyrhythmic style that was very remarkable to hear and see.

Thank you guys, I'll check them out for sure!

And Per, any particular song, album or period you like from Miles Davis, to start with?

Staff member
Seriously, I'm no expert on him. Somebody gave me a couple of albums by him which I like to listen to occasionally, but I don't even know their names.

No prob, same here. I guess it only means there's a lot of stuff to discover.

Staff member
My sister, who is taking a degree in jazz music, loves Oscar Peterson.

Forostar said:
No prob, same here. I guess it only means there's a lot of stuff to discover.
Click to expand...

That's what's so great about it.

Actually, I only recently noticed that I like Jazz. Before I thought Miles Davis was this one grand exception I always make to everything (except Rap), but then I was given a CD by a Persian jazz artist who lives in Berlin (with the usual wink-wink-nudge-nudge, given that the lyrics are also in Persian), and I thought "hell, this is really great!".

Perun said:
That's what's so great about it.

Actually, I only recently noticed that I like Jazz. Before I thought Miles Davis was this one grand exception I always make to everything (except Rap), but then I was given a CD by a Persian jazz artist who lives in Berlin (with the usual wink-wink-nudge-nudge, given that the lyrics are also in Persian), and I thought "hell, this is really great!".
Click to expand...

Staff member
I'm not that much into pure jazz, but I like jazz-rock fusion. Weather Report, Return To Forever, Mahavishnu Orchestra - plus a great deal of Frank Zappa's music is based on jazz.

I don't like jazz at all, but I used to live with someone who loved it, and he revered Miles Davis as a god amongst jazz men.

Staff member
Here's the thing about Miles Davis: he had several very distinct periods in his career. I have a few of his albums, and I recall liking Bitches Brew a bit. But the rest never really impressed me. (Keep in mind what I said above - I'm not a huge jazz fan, so take that as you will.)

But I do recognize that historically, he was the Jimi Hendrix of jazz. He changed everything. He was often ruthlessly experimental, and he pushed the whole art form to new levels. Plus he had an unparalleled eye for talent. He introduced the world to guys like Wayne Shorter, Joe Zawinul, John McLaughlin ... loads more, those are just the first 3 I recall.


Another thought ... I have the Ken Burns Jazz documentary on DVD (a 10-hour documentary). It provides a huge amount of music and information about the history of jazz. And I think I really like the pre-bebop stuff the best. Duke Ellington, Lionel Hampton, even Benny Goodman. Or even further back, the pre-swing era ... the 20s and 30s, when Louis Armstrong was just getting started. Just like rock and roll in the 1950s, there were no rules, and wild creativity abounded.

An excellent place to start would be the soundtrack to that documentary (I think it's 3 or 4 CDs). It covers everything from the 1920s to the 1960s. Some really great stuff there. You want some old-school jazz? Check out Jelly Roll Morton. Great stuff there.


Weird, the more I think about this, the more jazz I remember. I might have to watch the Jazz doc again soon.

Don Byron's "Bug Music" is awesome, by far his most accessible. His other stuff is worth looking into, but get "No Vibe Zone" last, it's his most eclectic.

Bella Fleck and the Flecktones are catagorized under jazz and their stuff is worth picking up too. Aside from their early stuff (Self-titled debut and Flight of the cosmic Hippo), Left of cool and Little Worlds (the three cd package not the crime that is the 10 song compilation (10 from little worlds) are a must.

While not entirely jazz (at least not for me) Norah Jones' debute, "Come Away With Me" is really good too. It won 8 grammys to boot.
K

I'm afraid Jazz leaves me a bit cold, like Country &Western, however if you would like to listen to some Jazz/Rock then I can recommend' Book of the Key' by Anthony Curtis

I will suggest you three albums for to start. The world of jazz as well as the world of blues, is full of collaborations
so if you buy these three albums, and then read the credits and make some research,
then you'll have at least other 10 albums at hand.

First of all, as you're a drummer, I'll recommend you my best album since more than a year (after Who's Tommy which is out of competition)

1) Krupa* & Rich**, 1956
The two best drummer of the century together in one record, plus some other awesome musicians (like the giant Dizzy Gilespie) to accomplish this masterpiece

I've already wrote my view for this record here

*he became famous by inviting his GENIUS playing on "sing sing sing", 1937 : note the "density" of the song (only 2:11 but even better of the extended 8min version) as well as Gene's playing between 0:39 -0:58....
**the biggest drummer of the century, here in a promo with Gene Krupa for the above mentioned record

2) Miles Davis -Kind of Blue, 1959
-A milestone in jazz music, something like The Number of the Beast or The Master of Puppets. Among others, John Coltrane on sax, and Bill Evans on piano -a must!

3) John Coltrane -Olé, 1961
-Not the most known Coltrane's work, but for me his most genius, especially the title track is one of the most astonishing masterpieces I've ever heard !! 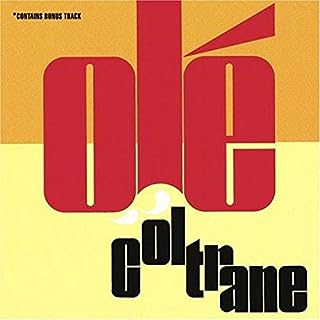 For your information, John Coltrane is now a saint for some orthodox African church, and to me is (except the Love Supreme contribution) due to this holy album !!

Do as I said, Yax and by searching the credits of each of these albums, you will discover a big piece of the jazz tree