Stranger in a Strange Land

Babo 91 said:
Re: Daily Song: Stranger in a Strange Land

10/10 this was released as a single and the fact that this is off all the setlists for many years is a travesty! All of Iron Maidens singles from the 80's still have plenty of play on their setlist but Stranger got shafted from bad luck to bad timing (with Adrian's dad passing I guess that's where they dropped the song from the setlist and it has never returned since)

10/10 this was released as a single and the fact that this is off all the setlists for many years is a travesty! All of Iron Maidens singles from the 80's still have plenty of play on their setlist but Stranger got shafted from bad luck to bad timing (with Adrian's dad passing I guess that's where they dropped the song from the setlist and it has never returned since)

H for the three-peat! I love the vibe of this song. The main riff/chorus and the pre-chorus are stellar. It also has one of my all time favorite Maiden solo sections. The guitar is lit'rally wailing for help.

That bass, that solo, in harmony, aauuuughmmyyygaawwwwwd.......

Stranger in a Strange Land has the misfortune of following up Loneliness of the Long Distance Runner. That's not even fair.
This is a great song that had to grow on me over several listens. I imagine Ed walking into a space bar and killing someone, like the image on the single.
More great singing by Bruce. Intriguing lyrics. Adrian's guitar solo is whisking me away to a dreamland.

Grooving riff, and a nice song overall. The solo is great like many of you have said.
But I find it a little repetitive and it never really lifts to be honest. Bruces vocals are still not the best here as for a big part of the album.

Staff member
10/10, largely for the great bass solo. I also like how Steve lays back a bit on this track, and the guitars feel more free because of it. Also a phenomenal vocal performance - you try hitting those chorus notes. I have, it wasn't pretty.

I'll be the one to give this the lowest rating so far. I find this a pretty average song, with a slightly repetitive feel and an uninteresting chorus. Not a bad song, but the weakest part of the album for me.

7. Was struggling between this and an 8 and the outro sealed the deal. The weakest song on the album but that is more of a comment on the album than the song.

Stranger in a Strange Land slows things down a bit. A steady gallop paves the way for a crushing Adrian Smith riff and dramatic verses with Bruce on his A-game. The pre-chorus drops into a near-disco stomp that fits beautifully, winding up for a heavy hitter of a chorus. The thing I admire about Adrian’s songwriting is that he doesn’t always do what is expected of a song: he adds a unique pre-chorus, doubles a verse or uses a bridge to elongate the buildup before giving the listener the relief of hearing the chorus again. Apparently, Adrian wrote this song about a real arctic expedition in which a man was discovered frozen in the ice and his solo captures that coldness, that melancholy with each note. It’s a beautiful piece of work and one of my favorite Adrian solos. Steve complements the lead nicely with some punchy bass chording.

Staff member
This song is immense. The 3rd and final Adrian penned song on the album and he really saved the best for last. There is atmosphere all over this track, with the synths, the ominous riffs, and Bruce giving easily his best performance on the album. This song shows that while Bruce might be experiencing some technical limitations, his sense of drama and Peter Hamill inspired theatrics hasn't left him.

The obvious highlight of this song is Adrian's solo. Not only is the solo itself dripping with emotion, but the way the rhythm section builds up underneath it really takes it to the next level. I can't really think of any other moments in the Maiden catalog like this one. Also worth noting is that this song has a fade out, very rare for Maiden. I think this is one of those times where it works as an artistic choice though.

Incorrectly predicting the future of Maiden should make this song lose a point, but I'm giving it a 10 anyway.
B

Another song on SiT which just falls short of greatness. Such a frustrating album for me.

I guess this is a personal thing but the synths are too high in the mix IMO. Also the chorus is a little bit tame for my liking and there's slightly dull guitarwork behind it.

With all that said, the 'brave new world' bridge is absolutely sublime. And then there's that solo from Adrian. Quite possibly my favourite ever. 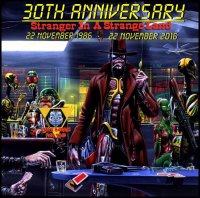 Great track, great solo. Something different for Maiden (rythm wise). Love the use of synths on this one, they create an amazing athmosphere.

Steve's bassline and Nicko's drumming make this song for me. Wouldn't be half as good if those two parts were made different. One of the best contributions from H, great lyrics and music, synths and dynamics are heavily used to create the necessary atmosphere, and it works. It could have benefited from a proper ending instead of a fade-out, though. Fabulous song, nonetheless. 9.

Once again, another amazing one on an album that keeps on giving. The intro and solo are out of this world. “Only” a 9 because, just like CSIT, it feels kinda repetitive after a while