GhostofCain said:
Sadly not. I am feeling a bit under the weather at the moment and as much as I would like to meet all the Maidenfans members that would be there (let's face it, my interest in British Lion is much less than in putting faces to you all), I would have to give it a miss.
Click to expand...

You should come to a meetup sometime then! We'd love to meet you.

LooseCannon said:
You should come to a meetup sometime then! We'd love to meet you.
Click to expand...

Same here. It would definitely be great to meet you all!

SPOILER Some videos from Chester in it: https://www.blabbermouth.net/news/video-steve-harriss-british-lion-performs-in-chester-england/

I've seen 3 videos of that link. Watching Steve I got the feeling that he's enjoying much more than when he's on Maiden lately?

He's headbanging as never before. Gallops and whoo whoos trough the set list.
The rest of the band is ok but they're not charismatic at all. Steve is sweating, the singer even don't have his shave head shinning at all
Last edited: Dec 20, 2019

Staff member
They've been calling it Guineas and Crowns for ages, haven't they?

It seems that not only were some Maidenfans forum members at the British Lion gig in London yesterday: Bruce was also there!

What evidence do you have for this?

Black Wizard said:
What evidence do you have for this?
Click to expand...

How about pictures online? 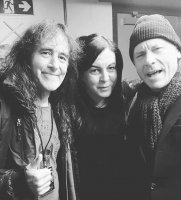 But surely Steve and Bruce are mortal enemies?

GhostofCain said:
How about pictures online?

You know, I think I saw Courtney Cox and was wondering if I recognised her. It's a shame she came all the way just to see British Lion and didn't bring the rest of The Iron Maidens with her for a show.

srfc said:
But surely Steve and Bruce are mortal enemies?

Keep your friends close and your enemies closer.

Black Wizard said:
You know, I think I saw Courtney Cox and was wondering if I recognised her. It's a shame she came all the way just to see British Lion and didn't bring the rest of The Iron Maidens with her for a show.
Click to expand...

She's not your type.

He never goes out without it!

The show was good fun on Friday. Both support bands, Nine Miles Down and Voodoo Six, were pretty good. Voodoox Six have a very cool song called 'Falling Knives' which really helped move the night along.

British Lion are definitely a much better live band than in the studio. The songs come alive and the bald man's vocals seem much less insipid. The new songs sound quite promising when played live, but they'll probably be quite underwhelming when the new album comes out next month. But now that Steve has finished this tour and with the new British Lion set to be released soon, he should put an end to all this dither and delay, Get The Next Iron Maiden Album Done and let Maidenfans move on.

The absolute hightlight of the night for me was getting this... 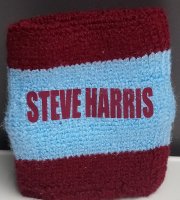 I had a bit of a juggling match with a woman in front of me before it landed on the floor and I pounced on it. Finally after 19 Iron Maiden shows and 3 British Lion shows I have managed to get an Iron Maiden thing. Thankfully it wasn't one of the wristbands Steve was wearing!

Staff member
Ah, unworn. Paul did say: "Is he going to wash it?"

After 3 British Lion shows you don't know the name of the bald man or you are still smelling Steve's sweat from his wristband?

Brigantium said:
Ah, unworn. Paul did say: "Is he going to wash it?"
Click to expand...

I would certainly have washed it! But after squeezing Steve's sweat out of it to try to make a magic Iron Maiden potion and finding any hairs or skin with a view to cloning him.

The_7th_one said:
After 3 British Lion shows you don't know the name of the bald man
Click to expand...

Nobody actually cares who the rest of British Lion are. There's Bald Man, Hispter Guitarist, Curly Haired Drummer, Very Tall Guitarist Who Looks Like Nicko With A Nose and Steve Harris.

Staff member
Hipster Guitarist went through a spell of people thinking he looked a tiny bit like Adrian, but not a lot.

Staff member
And that other guy does look like Nicko.

Edit: If you extract Steve's sweat, and throw it in a cauldron with a single hair from Kevin Shirley, a bandana, and a photo of a 757, you can conjure up a new Maiden album.