A guitar, drum, and synth fanfare kicks into a mid-tempo gallop to support a great verse, followed by a long "ohh" accompanied by some nice harmonized guitars and synth.

Another round of verse and "ohh" breaks into an appealing but overly busy and repetitive chorus. A nice melodic "oh-oh" section follows.

Another round of verse through chorus and "oh-oh" gives way to a nice harmonized interlude, which eventually dissolves into a soft but driving bass lead with great guitar atmospherics. Bruce offers a spoken word bridge announcing the birth of the Seventh Son and the powers he holds.

The atmospheric bass lead continues, now with choral accompaniment. This gradually builds before breaking into a brief harmonized interlude, and a series of great to excellent solos punctuated by brief musical breakdowns. This emerges into a choral lead section followed by an excellent harmonized guitar and synth interlude. This cuts into a great descending guitar lead, which eventually gives way to a final harmonized breakdown to end the song.

The verse section is a little overwrought, and the chorus is too busy and repetitive, but the rest of this song is just stunning. On balance I would still round this song up to a 9/10.

Overrated, goes on for too long. Vocals and the buildup are still very good.

A thunderous opening breaks into an epic piece with a lot of momentum to it before Bruce comes in with some of the most theatrical lyrics on an already theatrical album. Soaring vocals showcase how good he sounds before chorus comes in. Despite the repetition, it's still pretty fucking great. The song changes up to repeat a bit of the ROTAM style, but this is different enough to work quite well. Bruce's spoken word piece leads to build-up that culminates in one of the band's best instrumental sections. It's a masterful epic and a fucking awesome song. 10

This is the jewel of the album. Fantastic mystic intro opens this classic epic. Great riffs and especially verses, the chorus is good, the ''oh-oh-oh'' part is so damn good performed by Bruce. Again, great drumming from Nicko and twin-lead guitar harmonies which are unique. The middle calm part is great (not as great as on ROTAM, but still fits the mystic atmosphere of the song perfect) - maybe it's a bit stretched though. After it the song go crazy - full of melodies and 4 solos.... the second tapping solo from Dave is jaw-dropping, the two solos from Adrian are also very very good. The keyboards and the chorus chants adds that special thing to the song to become from a great song to a fantastic one. The twin-lead harmony at the end of the song is magical and Adrian shines at the end of the song too - which has a great end. Live, with all the explosions, smoke, stage set etc the song is a full experience. Not so much singing from Bruce, but I think it is a hard song for him to sing live.

Although it is in the middle of the album, semantically, the song is
the second part of the story. The verses describe the birth of the Seventh
Son. His six brothers are all present. They know the powers of the newborn
and anxiously await his birth and evolution, longing for
the side that, in time, their newborn brother will choose to serve.
Each variant of an eight-pointed star, such as the symbol set
accompanies the lyrics of the song, has its roots in its representation
planet Venus, the planet we recognize in the sky as Augerine
and Aposperite. It first appeared as a symbol that accompanied the Sumerian
deity of fertility Inanna.
Because it is the only visible star against
at dawn, Augerinos was considered "his bearer
of light ". It is no coincidence, therefore, that
identified, both with the illuminator of the knowledge of the Good
and Evil, Satan (“How he fell into annihilation
and the exhaustion of the King of Babylon, who
It looked like a dawn, rising in the morning
sky? ' Isaiah 14:12), as well as with his illuminator
For the sake of God, Christ (“I, Jesus, sent him
my angel to testify to you these things about the churches.
I am the root and the offspring of David, the bright star, the morning "
Revelation 22:16).
C

For me, from the quiet middle section to the end, probably the best piece of music Maiden has ever written. It just does something to me that takes me somewhere magical and I never feel any different when I hear it. The solo's, especially H's, the chord run with the choir type chants behind it, to the 3 blistering riffs that close the song. Just an incredible masterpiece. The intro is epic too, chorus a bit bland but I don't think it takes away from the overall song. 10/10

Christopher Baines said:
chorus a bit bland but I don't think it takes away from the overall song.
Click to expand...

There’s not a whole lot to the chorus, but it’s a fun-as-fuck, catchy little sing-along section in a wonderful tapestry of mystic magic.
C

Diesel 11 said:
There’s not a whole lot to the chorus, but it’s a fun-as-fuck, catchy little sing-along section in a wonderful tapestry of mystic magic.
Click to expand...

Happy birthday to SSOASS. Released on this day in 1988. 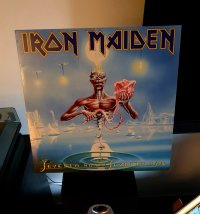 The album’s best song, the title track is a dark and chilling epic that starts out as a normal song and then heads out into an extended instrumental section. Steve retreads “Rime” with the bass interlude (complete with spoken word, too), but this feels completely different, so much eerier than on the other epic. The ghostly synth choirs are great. And the final solos rock. Both a fun anthem and a killer display of music, this is a fucking cool Maiden classic. 9/10
You must log in or register to reply here.
Share:
Facebook Twitter Reddit Pinterest Tumblr WhatsApp Email Share Link
Top