The Three-Body Problem by Liu Cixin

I gave up on that one, it was too convoluted and boring IMO.

Night Prowler said:
I gave up on that one, it was too convoluted and boring IMO.
Click to expand...

Yea, it is... in some parts! Just wondering how it will end!

Staff member
Dan Brown is a hack. That reminds me of the Da Vinci Code, wherein I was yelling, "it's apple, the fucking code is apple!" for about 400 pages.

If you guys are reading Dan Brown you are reading well below your reading and IQ level. I recommend Umberto Ecco for excellent historical fiction.

for the first time in over a year I felt like reading last night. got through two pages and passed out. I'm just glad I got the reading bug again, still on the same book from over a year ago, The Postman, but about 50 pages away from finishing.

I'm in the middle of NOS4A2, by Joe Hill, which is entertaining fantasy horror. It is about a parallel universe, perhaps created by people's imaginations, and an evil dude who kidnaps children and takes them into this parallel universe using a sentient 1938 Rolls Royce Wraith with the eponymous license plate ("nosferatu"). As I started getting into it, I thought it reads like a Stephen King novel. Then I noticed that the author's photo looks a little like Stephen King. About 30 seconds of Google later, I discovered that he is, in fact, the son of Stephen and Tabitha King. Joe Hill is a pen name. So, if you like Stephen King, you may like this book. I do, so far. Evidently the tv show based on it is disappointing, but I haven't seen it yet.

Just over a hundred pages away from finishing Wolves of the Calla. Stephen King's world-building is excellent but this entry in the series seems to drag on for too long. There's been hundreds of pages of telling stories with little action in the present time of Roland's world. The characters are convincing but does Callahan's backstory really need to be that detailed, for example? After 600 pages, the threat of the Wolves just wears off a bit. Somehow, Wizard and Glass was more emotionally grabbing. Anyway, I'm interested to see how this one concludes, I'm hoping for something big at the end. Song of Susannah is probably going to tackle Susannah's demon baby. It has a slightly lower rating on Goodreads than the books preceding it but that might mean nothing. It's #7: The Dark Tower that I'm really curious about.

Staff member
You know, I enjoy Wolves more in retrospect than when I was reading it. At the time I felt like it got in the way of the overall story. It is pretty long but I think it actually holds up better out of context of the greater series. It doesn’t hold a candle to the first four, but it’s still an enjoyable story. Callahan is a great character with a gripping backstory.

Also, he did a great job of portraying the threat of the wolves and slowly revealing what they actually were. 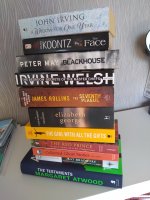 The books I have acquired over the past week. Fun times await!

I quite enjoy M.R. James' Ghost Stories, which ones are in that book?

My current fiction read is "The Stolen Calix" by Derry McKeone. It's 1205 and a Welsh archer called Madoc has just returned from the Fourth Crusade and is somewhat jaded by what he has witnessed. During the course of his journey to rejoin his family he retrieves a stolen "chalice" that turns out to have mythical significance, and in so doing unwittingly saddles himself with the task of returning it to its rightful home - Constantinople. So he and his twin brother Reys embark on an epic and dangerous quest: if they fail, it is said, the Byzantine Empire will fall ...

A really good adventure story so far, at least as readable as Bernard Cornwell.

Edington said:
I quite enjoy M.R. James' Ghost Stories, which ones are in that book?
Click to expand...

Count Magnus for sure...

Erich Kästner's Drei Männer Im Schnee, in German.
Read the Bulgarian translation a long, long time ago, so almost feels like a new book. Some of it couldn't be properly translated, obviously.

Ariana said:
View attachment 10486
The books I have acquired over the past week. Fun times await!
Click to expand...