Here he's doing Voodoo Child plus a solo. You'll love his reaction when he's interrupted by some loud car.
Some excellent ride cymbal playing as well.

Yep. On two albums, which both came out in the same year. I have them both on LP.


Great albums. Sounds like a mixture of Rory Gallagher and Ted Nugent. Thanks.


Stretch, better known for their big hit "Why Did You Do It" heard here in their final incarnation sounding more like Santana actually. This was a different line-up and featured Kirby on lead guitar, Steve Emery on bass, John Cook on keyboards, Nigel Watson on guitar, Chris Fletcher on percussion, Fran Byrne on drums and also Nicko McBrain on drums. He would later end up in Iron Maiden.

I wish I had a better overview of the credits to see on which tracks Nicko is playing. It certainly sounds like him in the clip, but since they talk about a second drummer I am not 100% sure. But it's gotta be him, I think.

Another one:
A Maidenfans member called lira, said that he also drummed on a Jenny Darren album from 1980. And indeed!! This is the cover

and this the tracklist:
http://eil.com/shop/moreinfo.asp?catalogid=416300

I Just found four songs from the album:
http://www.myspace.com/jennydarren

...After 4 years with Gill/Wade and David Beale Jenny was signed exclusively to Dick and Steven James of DJM records. Together with songwriting Partner Bob Webb Jenny went on to write 2 albums worth of original material, plus a ‘SUPERBAND’ of musicians were assigned to work with her. Their names being: Luis Jardin –perc (The Buggles) Chris West-guitar (Stomu Yomashta) Andy Richards-keys (Frankie goes to Hollywood/ Trevor Horn/Kylie Minogue) Chas Kronk-bass (The Strawbs) Nico Mcbrain-drums (Iron Maiden) and finally MD/Composer/guitarist/keyboardist ( From the band England) Bob Webb....

Excelent! Thanks for the MySpace page, i can hear some of the Jarren tracks. They're beautiful.

Nicko played in the entire Stretch's Forget the Past album. I will return to this topic later and post the only picture i know of Nicko with Stretch. cheers

Forostar said:
Cheers! The two albums he made with Travers came out in 1977. Some pretty good songs on them. Haven't heard this 1976 gig yet but I wonder which songs are on the setlist.
Click to expand...

Alright, the Stretch picture with Nicko McBrain. This isn't a very nice picture because I had to scan from the back cover of the cd. Yes, cd. Although Hot Wax was a poor label and Forget the Past was only released on vinyl, i found a japanese cd with a clean sound.

Nice!
On the right?

Or else it had to be the 2nd from the left with mustache! 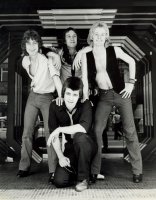 Staff member
Wow, he really bounced around back then - kind of a musician for hire it looks like.

He hardly spent 1 year with a band. But drummers were just like that. See Clive Burr and Thunderstick...

A curious fact is that two guys from this Blazer Blazer lineup were the composers of "Juanita".

Staff member
One of the comments:

That's the translation...
The original text:

WOT ABOUT THOSE SLAYER GITS EH? WOT A RITE FACKIN BARNEY EH BOYS AN GIRLS? KERRY KING? GEEZ CERTAINLY LUVS IS PORKIE PIES YA KNOW? WHUP DE WHUP DE WOO! AN OW BAAHT THAT JEFFREY ANNEMAN EH? FACKIN WOTS THAT ABAHT? I 'EAR E'S SIGNED ON FOR THE OL' NAT KING COLE IF YA GET ME. SPENT IT ALL ON THE OL BOUTROS BOUTROS GHALI RITE?