Lego said:
Agreed - I really liked Speed of Light but it was very much expected for the first single. Nothing about it really surprised me. TWOTW, on the other hand...
Click to expand...

It gets to me same impression as I've heard The reincarnation of benjamin breeg for the first time - it was too unexpected choice for a first single. And actually nobody can accuse maiden that they always do the same kind of music.

You wanna see the credits of the song, here's the info from Tidal: 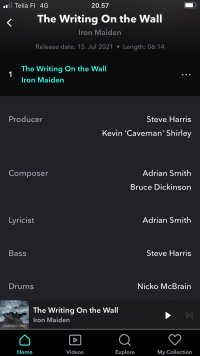 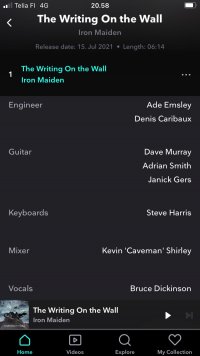 Coughs in the key of Different World.

But yes, it's great.

Twarkle said:
Thats simply not true, not sure where you would get that idea from, especially on systems designed to handle that. In this case, Aurender N20—>Chord MScaler—>Chord Dave—>Sim Audio Moon 340i—>Paradgim Persona 9H’s in an acoustically treated room.
Click to expand...

I have this on rotation on Spotify LOL I do hope the album is coming soon too. The sound is waaaaaay better than anything they produced for a long long time. Bruce does not sound strained like on BOS or TFF.

PhantomOfTheOpera said:
You wanna see the credits of the song, here's the info from Tidal:
View attachment 15792
Click to expand...

Adrian credited as lyricist rather than Bruce? Wasnt expecting that!

Also, there are so many little things in the background that nobody outside this forum would notice (or care about!). Sooty, cart & horses, aces high bar, ed force one etc. Took me 5 or 6 views before i spotted the 'Twilight Zone' Eddie pic!
Last edited: Jul 15, 2021

JudasMyGuide said:
Coughs in the key of Different World.

Yeah, Different World, The Final Frontier, Coming Home... He's done loads of solos to contend with those on SIT. Though I tend to agree that the tone he had on SIT suited him the best.

The more I listen to this song, the better it gets.

What was the video about? At first i thought it was about trump and the border wall? But then eddie turned into a samurai?

And it’s an ear worm! I’ve been humming it for the last 30 min. Lol

Jadukor said:
What was the video about? At first i thought it was about trump and the border wall? But then eddie turned into a samurai?
Click to expand...

JudasMyGuide said:
3. As for the video, well...

The director: Hey, guys, how many ideas would you like to implement in your video?

Posting an article that simply questions whether a format is silly or not, that has been refuted many times, does not mean it sounds worse. No point in getting into the “Golden Ear” argument here though, there are plenty of forums that do that.

It will work great live

To me even on spotify Bruce sounds like he is separated in some phone booth.

I'm glad I'm divorced. I can make out with this song when I get home and not feel guilty.
D

Adrian as lyricist? That surprises me. I know Bruce does play guitar but I wouldn't have thought he could come up with riffs and composition like that.

I've now listened to the song 5 times, the youtube-stream had somewhat vocals hidden but those were more front and powerful when I streamed the song from couple different services (lossy and lossless). I really liked the intro, western-feeling with bluesy flavors added. It immediately felt like something new had been found and this far on their career it's major plus thing.
All in all, it's too early to say much but after almost 6 years of wait this was something that really grabbed me and I like it alot.
I can so imagine this being played live where stadium full of fans jam and sing along to the song. It works indeed.
Based only on this, I think it will be truly interesting to find out the rest songs and what kind of feelings they will provide me.

dmort93 said:
Adrian as lyricist? That surprises me. I know Bruce does play guitar but I wouldn't have thought he could come up with riffs and composition like that.
Click to expand...

Could just be a mixup.