I am not a fan of those event shirts in general- but the waving Eddie’s and sorta sweet. (In the sentimental way)

Courbet said:
I am not a fan of those event shirts in general- but the waving Eddie’s and sorta sweet. (In the sentimental way)
Click to expand...

I think they are kinda fun. I got the Nordic event shirt and will very likely get the Tampa one

Courbet said:
I am not a fan of those event shirts in general- but the waving Eddie’s and sorta sweet. (In the sentimental way)
Click to expand...

It's hit and miss. Some are really cool, some are not.

Patrick92 said:
About the songs then. I also think Clansman and Sign of the Cross will go away. Dont think there will be any Blaze songs next year.
Flight of Icarus, Aces High, Revelations, Blood Brothers will also go I think. That leaves us with 6 classics. Trooper, Hills, Hallowed, Fear, Maiden and Beast. Will all of them stay? I hope atleast one of those songs go.
Click to expand...

Futureal is a possible choice. At least I hope so. 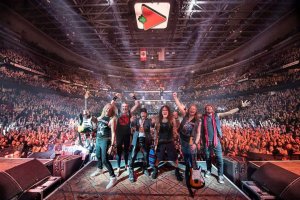 Nicko with an award for one of Maiden's most epic and successful tours!

TAMPA, FLORIDA: NICKO MCBRAIN BEING PRESENTED WITH AN AWARD DISC ON BEHALF OF IRON MAIDEN FROM THEIR AGENTS CAA (N.AMERICA) AND K2 (REST OF WORLD) COMMEMORATING THE AMAZING ACHIEVEMENT OF 3 MILLION TICKETS SOLD ON THE LEGACY OF THE BEAST TOUR. 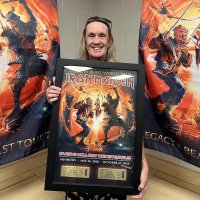 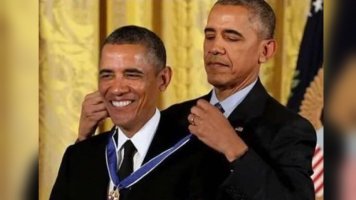 Staff member
140 according to wiki.

I'll be closing this thread soon as this tour, at long last, is over.

It was a great run! Looking forward to the Future Past...

Staff member
While the tour definitely overstayed its welcome, I think this will go down as one of the top 3 Maiden shows in terms of setlist and stage show. The lighting and design was absolutely gorgeous, and it was cool to see them experiment with a non-static stage set. The setlist was pretty much perfect, at least for the 2018/19 legs. Really broad selection of material and several songs I never expected Maiden to play live again. The 2021 leg didn’t quite have the same magic for me, but was still quite enjoyable. I don’t think Senjutsu worked very well as an opener and Aces High was an awkward closer, but I’m also glad both Blaze songs survived and Writing on the Wall was immense live.

I think we’ll look back on The Book of Souls, Legacy of the Beast, and soon the Future Past tour as being a bit of a renaissance for Maiden’s stage shows and tours. The Maiden England and Final Frontier tours by comparison come off as really uninspired compared to what we’ve been getting over the last few years. Lots of cool set surprises like Blaze era tracks, Flight of Icarus, a whopping 7 songs off TBOS, and coming soon a bunch of SIT deep cuts. Not to mention stage shows that even by Maiden standards are really visually incredible. It’s a great time to be a fan.

Staff member
I still thoroughly enjoyed the Senjutsu songs, just to say I've seen them. I'm a big fan of all three songs that got played.

Rallying round to the call!
We can hear, far away... are the sound of distant drums!

Loved it. While the 2018 shows were just a tad bit better, I thoroughly enjoyed the one show I managed to catch this year with the brilliant Senjutsu cuts, interesting encore (yeah yeah, Aces High, but still) and possibly the last chance to witness songs like Sign of the Cross performed live. I can't even express how grateful I am for the LOTB setlists(s) altogether. Managed to catch a lot of my long-time favourite songs live that I honestly didn't expect to witness.

For me, Sign of the Cross on this tour was, in some ways, what Rime of the Ancient Mariner probably was for a lot of fans in 2008-09. I'm super excited for Future Past tour and the possibility of Alexander the Great of course, but as I've stated previously... If I had the power to replace SOTC with ATG for LOTB tour... I confess that I might have not done it.

A FIRE IN THE SKY!

Thank you, Iron Maiden. See you next year!

LooseCannon said:
I still thoroughly enjoyed the Senjutsu songs, just to say I've seen them. I'm a big fan of all three songs that got played.
Click to expand...

Absolutely, I’m always happy to hear new Maiden. Didn’t mention but I thoroughly enjoyed Stratego as well. I think flow was a big part of it for me. Keep Aces High as the opener and put a few more classics up front and then go into the Senjutsu material.

The perfect ending to the tour would be to give us a video release on youtube, like the Book of Souls live chapter
D

they used to do that in the 90s i think but i havent seen any like this in the last 20 years.

dickinson1978 said:
they used to do that in the 90s i think but i havent seen any like this in the last 20 years.
Click to expand...

There’s a similar photo from the BOS tour. It’s on the back of the Live Chapter album.

Thanks for the memories, Legacy Of The Beast tour! It was really special and amazing.

Rod: ''And finally, both personally and, I am sure, on behalf of all of you – massive thanks to Bruce, Steve, Dave, Adrian, Janick and Nicko who never let up, played, and sang! magnificently and matched every crowd for passion and enthusiasm every single night, wherever they were. Guys – I don’t know how you do it but we are all bloody glad you do!!''

Staff member
And with that, this thread and tour comes to a close. Future Past leg one next year, I'll be at Leipzig!