my inner 12-year-old had a few laughs

Yeah, that was terrible.

The only redeemable piece of writing in there is the term "Halfauxrd"...which, I can't imagine this writer was the first to do.

MrKnickerbocker said:
The only redeemable piece of writing in there is the term "Halfauxrd"...which, I can't imagine this writer was the first to do.
Click to expand...

And even then I think that “Halfraud” rolls off the tongue better, even if it’s not quite as similar that way.

Yeah the whole article was just cringe. MaidenFans could print its own Iced Earth joke book at this point, but they’re so much funnier than MetalSucks’s... I dunno, it feels as though a boomer tried to write jokes a 12 year old would appreciate. Flatulence? Bear spray x ∞? It was him! x ∞? Racism just because we can? Fucking hell. What a dumpster fire. I didn’t laugh once, it just feel like a cheese grater was running over my skin.

Staff member
I'll play fair and offer others to cringe at my failure.

King Jon I. A Tragedy in three acts.

Barlow: Holy shit, man.
Schaffer: We're under attack.
Barlow: Really makes you feel different about the world.
Schaffer: Yeah. So many people hate us for our freedom and our morals.
Barlow: I don't think I can do this anymore, Jon.
Schaffer: What do you mean?
Barlow: I mean, sing about Frankenstein and comic books every night when we're at war. It's just all changed now.
Schaffer: I hear you, brother. We need to root ourselves in reality.
Barlow: I knew you'd understand, man.
Schaffer: Next album is going to be about the real world and the conflicts we fight as real human beings.
Barlow: Jon...
Schaffer: There's going to be a re-telling of the Battle of Gettysburg that explains the fate of our glorious nation.
Barlow: That's not what I mean, Jon...
Schaffer: I know, man. Americans fighting against Americans, nobody likes that. But it happened and we must not forget.
Barlow: Jon, seriously...
Schaffer: We're going to put our finger in the wound with a song about Attila the Hun. It's a conflict that's still relevant today.
Barlow: Jon.
Schaffer: And we're going to do a song about the Red Baron. It's going to be our answer to Aces High, but we're going to one-up Maiden with this. It's going to be really mean and really rad.
Barlow: Jon!
Schaffer: And Waterloo. The downfall of tyranny. The French won't support us against Iraq, so we're gonna rub it in their face how they were defeated by Prussians, Russians and Austrians. Damn, that's a good line, I can really hear you spit it out.
Barlow: JON!
Schaffer: WHAT?!
Barlow: I mean I can't do... this! I need to give something back to society as a whole, I can't just do this whole metal thing anymore.
Schaffer: I get that, Matt. I just opened a shop where I sell tin figures from the Revolutionary War to the Civil War, to teach people about the importance the uniform has in our history.
Barlow: Don't make me say it, Jon.
Schaffer: From the musket to the rifle Matt, it's such a beautiful thing.
Barlow: Jon, I'm quitting the band to become a policeman.
Schaffer: Blinks That's the stupidest thing I ever heard.
Barlow: Jon, I'm serious. I want to serve my community.
Schaffer: Matt, let's talk this over. We can change things.
Barlow: It's not you Jon, it's me. You're meant to play those thrashy riffs and express your artistic vision, but I need something else.
Schaffer: Don't fuck with me, man.
Barlow: I'm not. I'm always gonna be your brother.
Schaffer: Fucking hell, man! Fine! Go! I never wanted you in the first place! You were just a stand-in for John Greely anyway!
Barlow: I get that you're hurt Jon, but don't say things you can't take back.

Schaffer is in his living room watching audition video tapes on his third bottle of Jack Daniel's.

The next day. Schaffer lies on his couch surrounded by five bottles of Jack Daniel's. The phone rings.

Schaffer: Schaffer?
Owens: Mr. Schaffer? Are you still at home?
Schaffer: Who's this?
Owens: Tim, uh... snarls Ripper Owens. You hired me last night, remember?
Schaffer: Rubs his eyes I did? Groans Yeah okay, I'll be at the studio soon. You let yourself in.
Owens: I don't have the keys, Mr. Schaffer, and it's below freez... *click*

They record The Glorious Burden. It gets poor reviews and Schaffer is interviewed by a music journalist.

Journalist: So let's talk about this new album of yours, Jon, The Glorious Burden. I think it sucked.
Schaffer: Yeah, that's your typical critic prejudice. The band has a new singer, so the new album has to suck. It was the same with Iron Maiden and Judas Priest.
Journalist: It's not that, actually. I like Tim Owens...
Schaffer: Snarls Ripper! Owens.
Journalist: Right, and I gave Jugulator a 4/5 when it was released.
Schaffer: Jugulator?
Journalist: Yeah, the Priest album.
Schaffer: Priest have a new album?
Journalist: Uh... anyway, it's just, the album isn't good. Your songwriting is monotonous, it's not played very well and with all that I can't even overlook the soppy American patriotism...
Schaffer: There we go! I should have known! You're a fucking Communist is what you are. Can't take it when an honest American stands up for his nation and his freedom. Why don't you go fight for Bin Laden you fucking hippie? You feel threatened when a real American band plays real American music because you're gay and you're a pacifist. And then you blame it on the new singer. Let me tell you son, snarls Ripper Owens is more American than you're ever gonna be and he only sings for real, straight American bands.
Journalist: Uh...

The Glorious Burden tanks. Schaffer joins forces with Hansi Kürsch for the second Demons & Wizards album and critics love it. Schaffer decides to return to fantasy themes because the free market decided what kind of music he should make, and since he's not a Communist, he listens to what the free market says. He records Framing Armageddon and it's the worst critical failure of his career. Schaffer fires Owens and get Barlow back in the band. They record The Crucible of Man. It's another critical failure. Schaffer is back in an interview.

Schaffer: So first you tell me you hate America so I make an album about the Something Wicked Trilogy. Then it's Owen's fault. So I record another Something Wicked album with Matt. And you hate it too.
Journalist: To be honest Jon, I think you're just burnt out creatively. You just can't seem to re-ignite the spark.
Schaffer: Yeah, now I get it. It's not about the music after all. It's about me and it's about honest Americans.
Journalist: Jon, that's really not what I mean to say...
Schaffer: Eyes widen You're being paid to write bad things about me! You're partying on the back of the last honest American!
Journalist: I share a one-bedroom apartment with a cockroach nest and this job can barely pay the rent. I have a second job as a janitor in a Mexican restaurant.
Schaffer: I knew it! A decent-minded, red-blooded, hard-working American can't even get one job and you have two thanks to the Mexicans who come to our country illegally!
Journalist: Hard-working Amer...
Schaffer: It's time somebody put an end to this! I'm not gonna tolerate it any longer when corporate shills try to silence the last few people who try to speak the truth!
Journalist: I drive a 1982 Chrysler, Jon. I was just saying...
Schaffer: And I can't say anything anymore! Is that how it works? Are your buddies already waiting for me outside? Am I gonna be put in a FEMA death camp now?
Journalist: Jon, listen...
Schaffer: No, you listen, pal! You and your buddies from Bilderberg just keep printing money so there's gonna be an inflation and you're all gonna be billionaires while I eat the crumbs that fall down from your tables!
Journalist: That's not how the economy works...
Schaffer: Lies! You're just telling lies to keep us stupid!
Journalist: I didn't say anything, I just...
Schaffer: You won't say anything anymore soon. I woke up, man. I'm gonna tell the truth. You're not gonna stop me. Turns to the camera snarling. Nobody's gonna stop me. Shakes bear spray.

That was infinitely better.

There is no federal parole. He can get around 20% off for good behavior but that's it.

Crazypants said:
There is no federal parole. He can get around 20% off for good behavior but that's it.
Click to expand...

Can he get an added sentence for releasing the steaming pile of shit that is Sons of Liberty?

Im writing the Judge about that now.

Diesel 11 said:
That was infinitely better.
Click to expand...

No sneers, my friend, matters it not
Better than this? Have we forgot
That though perfection is a luck
Know: MetalSucks truly indeed does suck


I tried at least.

That’s a terrible thing to say about Metal Gear Solid 2!

It's going to be released later this week.

And here it is:

Since I've never been into Iced Earth I've refrained from commenting here so far. Still, I'm surprised how you heartless bastards keep showing no understanding or compassion for a guy who'd do anything for an old crush. 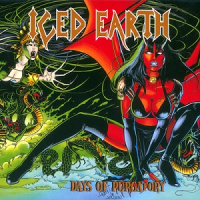 ^ That picture was also featured in this old post: