Let's collect hints for an upcoming Maiden event in 2023 HERE.

A big thank you to @Samantas5855 who worked out the following summary. Whenever an update might be done by Samantas5855, I'll edit this post and will give the date along with it to make sure you won't miss anything.

What we have so far:

Code:
• Day of the dead 2022 trooper features Stranger In A Strange Land eddie

View attachment 21699
• The Legacy Of The Beast art for the American leg has a background reminiscent of that the artwork in the centre of the SiT vinyl has, some constellations also match 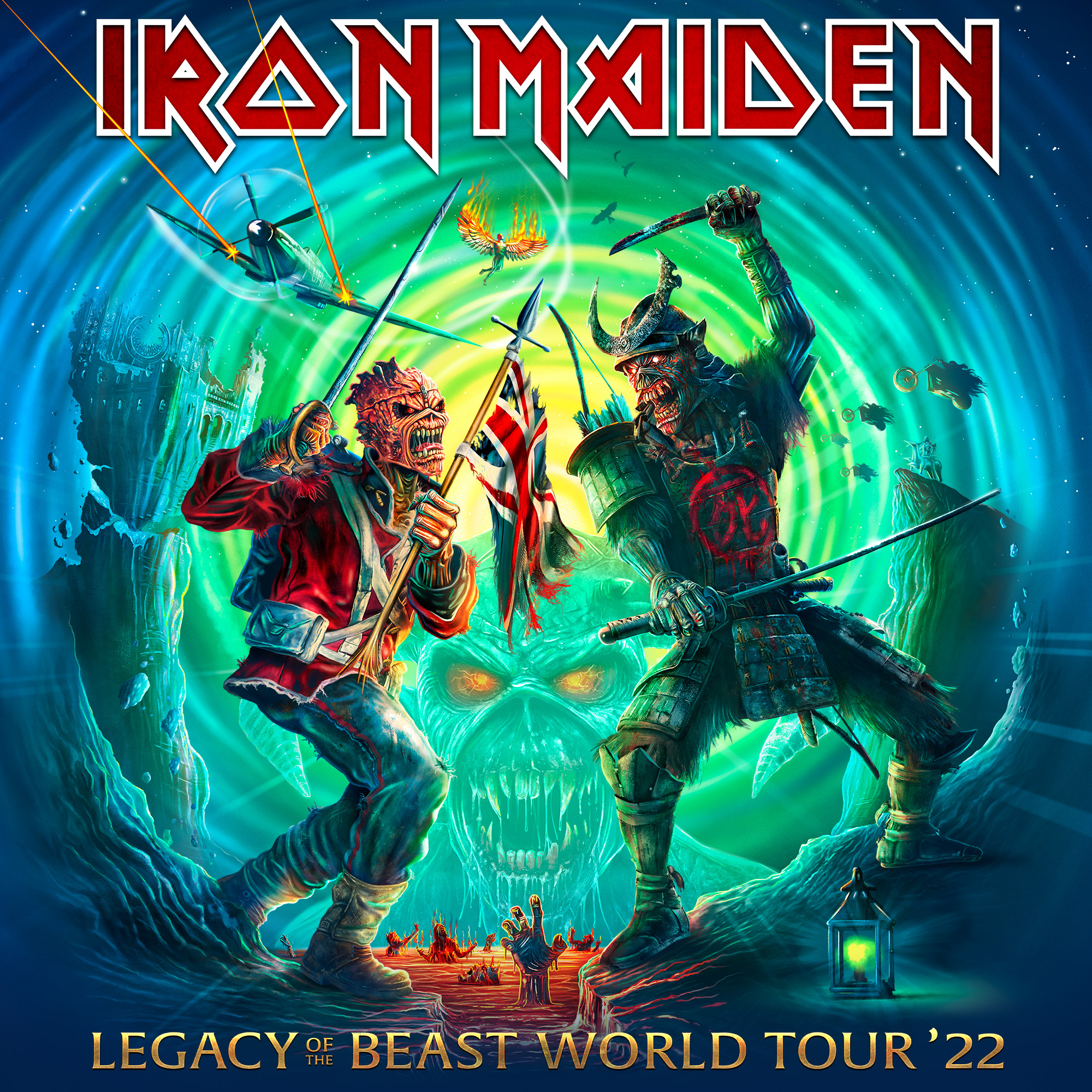 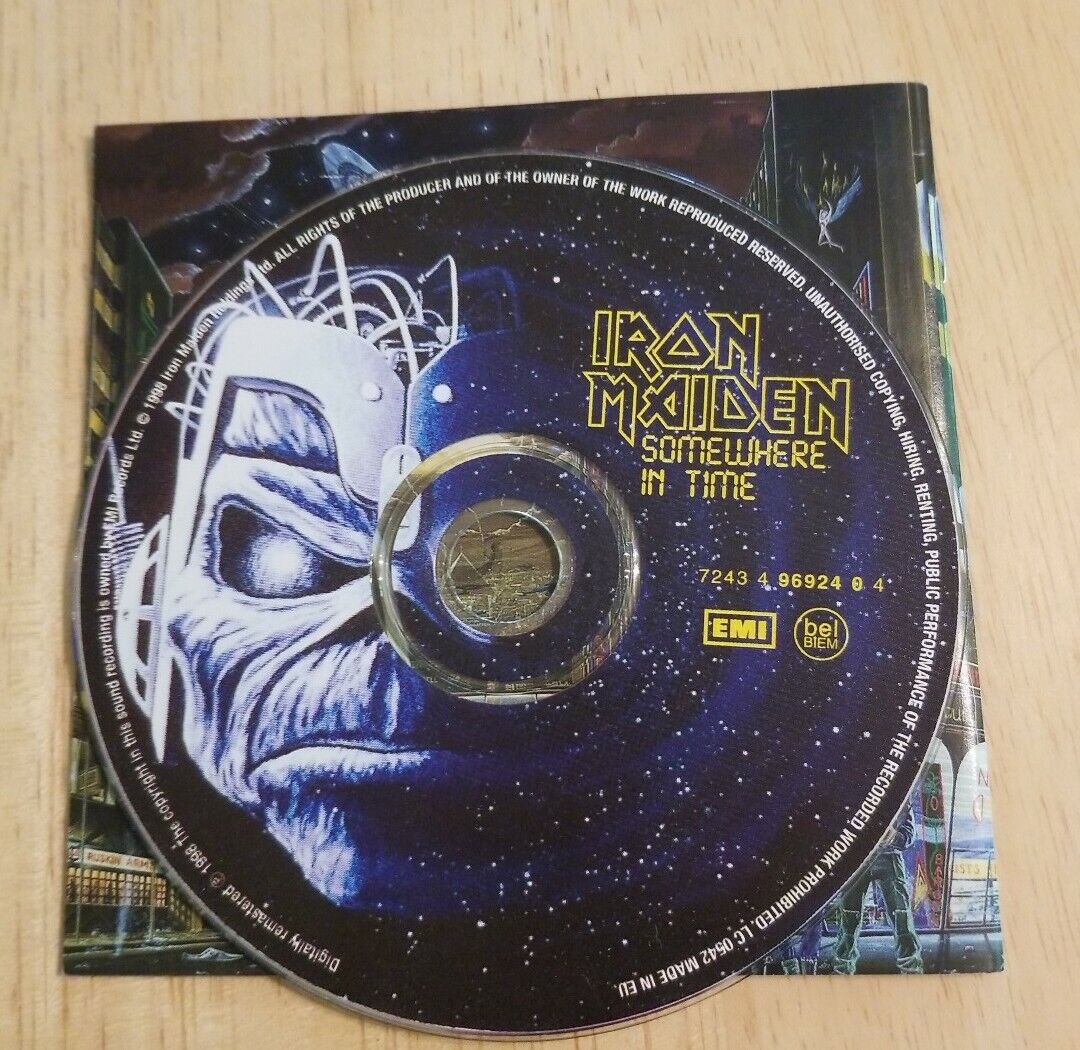 • Jannick Gers' guitar tech Eddie Marsh posted on Instagram a photo of him tuning Jan's guitar at some venue with the caption "Somewhere on tour!"

View attachment 21660
• Jannick said this caption on the Tour Update video at 3:35 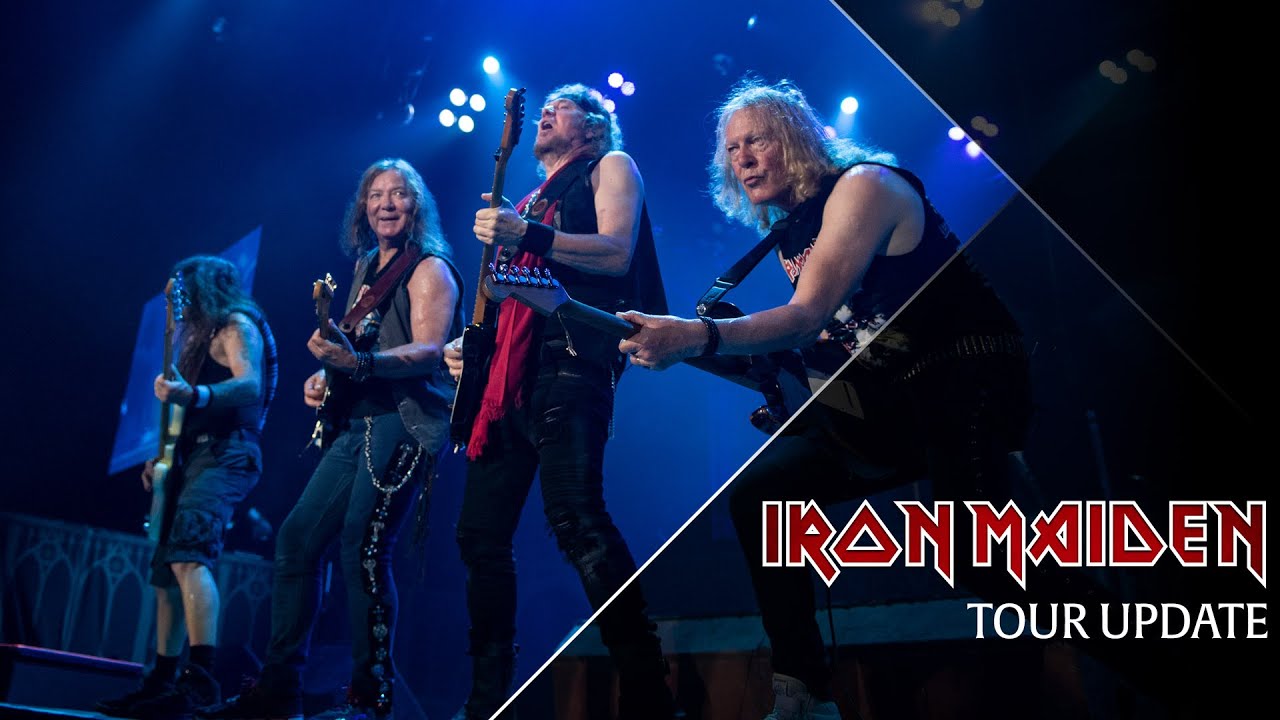 As the Euro leg of the tour draws to a close, we check in with the guys on the road...Tour dates and tickets - https://www.ironmaiden.com/toursFollow Iron Ma...

• Bruce saying somewhere in time and somewhere on tour during the final shows of the european leg, it was even uploaded on Maiden's youtube channel


I read here that Bruce also said We'll see you somewhere in time on Copenhell too, check at 5:15 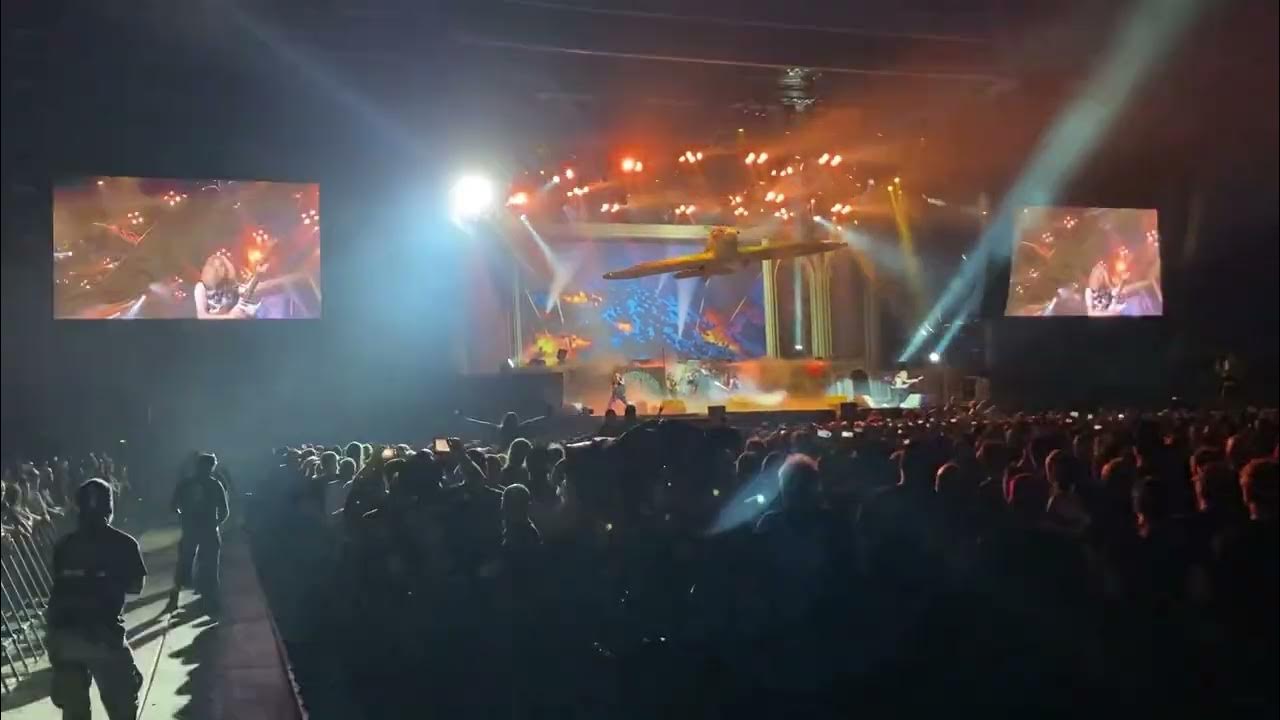 Iron Maiden caps off a stellar headlining set at Graspop in Belgium with the classic opening track from 1984’s Powerslave ‘Aces High’ June 16, 2022

View attachment 21697
• Nicko McBrain said that he thinks IM will play Alexander on the Senjutsu tour
At 20:20

https://twitter.com/i/web/status/1563222164698169344
• The Brazilian shirt recreates the Women in Uniform cover with Margaret Thatcher replaced with Senjutsu Eddie, Eddie with the Trooper and there's a Carnival theme, what's important here is that the woman on the right has a cyborg Eddie skin

View attachment 21968
Some days earlier he also posted a picture of him mixing something on his laptop. 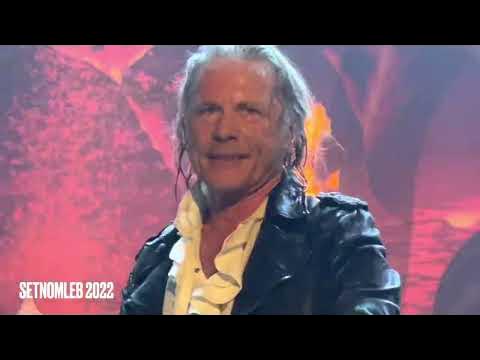 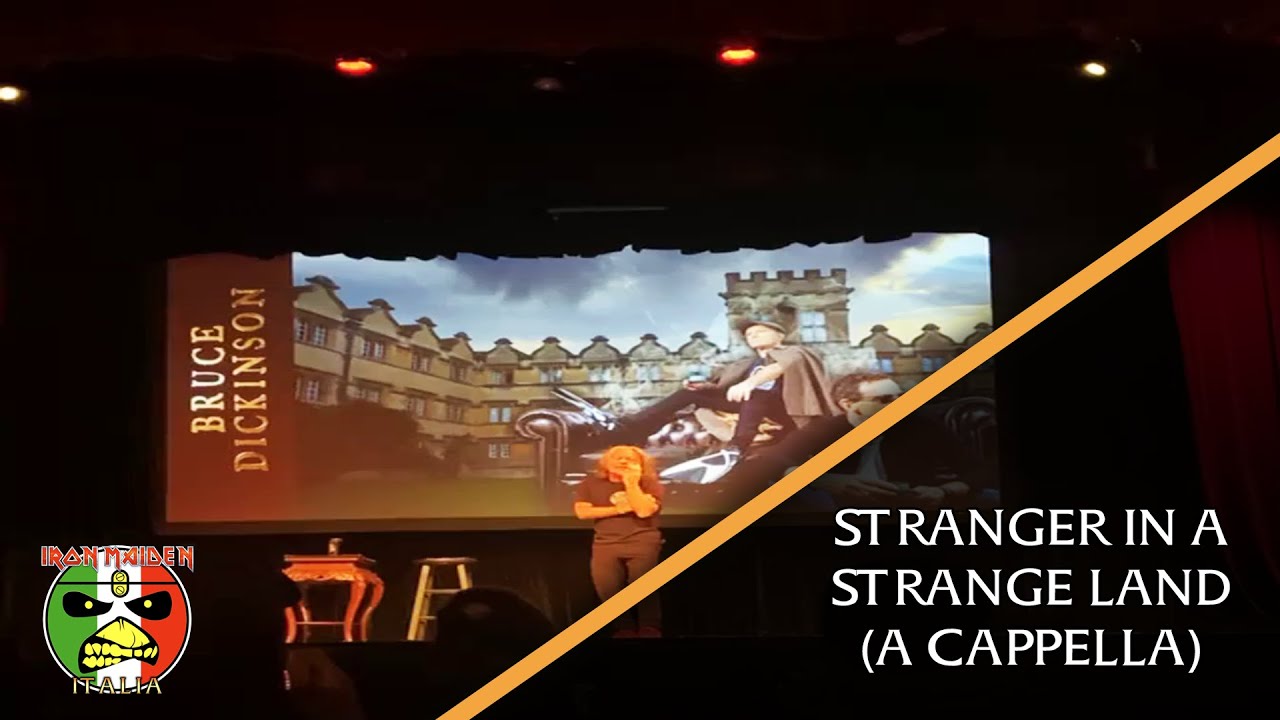 Bruce Dickinson - Stranger in a Strange Land (A Cappella 2022)

Also, afaik a Senjutsu tour was never really anounced. Wacken 2023 is the only confirmed show and since this festival is so big they won't play Senjutsu in its entirety for sure.

Bruce also said during RiR 2022 that they'll be returning next year and then acted as if he shouldn't have said it.
"Brazil, have a great weekend, we love you, go home safe. Alright? We wanna see you all alive and well next year. Oh oop hahah"
RiR 2022 was proshot and live streamed as was Download Festival 2007 where Iron Maiden played for their AMOLAD tour and after the last song (HBTN) Bruce said:
"We'll see you later my friends, have a great (something) alright? haha Look after yourselves, you don't want anything to happen to you before next trololo summer, alright? We'll see ya haha".
Next summer was the Somewhere Back in Time tour.

Debunked hints:
• 404 on the official website is cyborg Eddie: While true, as the internet archive proves us, this has been the case since at least 2016 therefore irrelevant

• Bruce saying they'll play Alexander and talking about it: Bruce has done this since 1999, especially in Greece thereforce also irrelevant
Last edited: Sep 15, 2022

A Senjutsu/SIT tour + a studio booking in october, then a new album release in 2024.

A tour with Dog Eat Dog.

TheMercenary said:
A Senjutsu/SIT tour + a studio booking in october, then a new album release in 2024.
Click to expand... 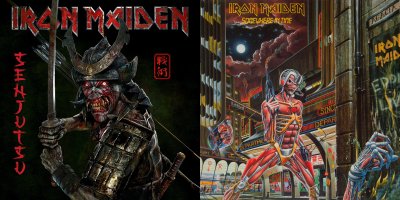 @Kalata : I'd rather have a new Maiden album in 2024, so there would be less time to wait for new music.

Nicko said he thinks they will do Alexander the Great on the Senjutsu tour. This was back in march at a Titanium Tart concert.

Like with The Legacy of the Beast predictions and The Book of Souls tour predictions, I think 2023 tour will be somewhere in the middle when it comes to fans' wishes and expectations; far from the wildest dreams but also far from being as generic turd as the most pessimistic predictions, e.g. "five new songs and trooperwrathchild666fearofthedarkevilthatmendo2minutes" and that's it!!!"

You shouldn't be afraid to shoot SIT strangers, @The_7th_one , it could be funny...

The setlist could be :

Poto said:
Nicko said he thinks they will do Alexander the Great on the Senjutsu tour. This was back in march at a Titanium Tart concert.
Click to expand...

Senjutsu tour is next year for sure. It will have its own tour (like every album) and probably they will not play the whole album live, but the setlist will be mixed with deep cuts (this will sell better, not that they need help in that regard). So a few SIT songs for next year is totally possible (remember that the original LOTB setlist had 4 POM songs).

I was not sure about the SIT rumours because Bruce said those words only at 3 shows, but then more hints followed. And if they play (let's say) 4 SIT songs, then it could be like a SIT Hits tour (with a different stage set) - after all I think the History tours ended when the LOTB tour started and SIT is the only 80's album for which we don't have that type of tour and they play only Wasted Years and Heaven Can Wait.
-> Let's also not forget that Maiden England tour was not originally planned.

We could also have some cool tour merch (the two albums have some things in common) - shirts with Time Machine/Caught Somewhere In Time & Lost In A Lost World/Stranger In A Strange Land artworks. I don't expect the album tour poster to feature another Eddie other than Senjutsu.
E

TheMercenary said:
a studio booking in october, then a new album release in 2024.
Click to expand...

Rehash of an older meme, but... 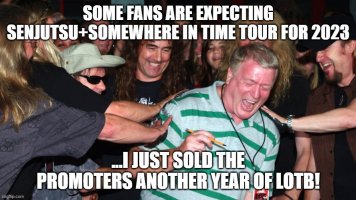 TheMercenary said:
The setlist could be :

That looks like it could very well be like the setlist. If they only could have Infinite Dreams somewhere I would be fine with this set.

PhantomOfTheOpera said:
If they only could have Infinite Dreams
Click to expand...

Steve: Guys, some folks on maidenfans want Infinite dreams in the next setlist: I can't deny them
Bruce: That song is hard to comprehend
Dave: Even in my wildest dreams?
Adrian: Guys, when will it end?
Bruce: Restless sleep of that song.
Janick: It makes me wonder, makes me think: what is your view on this Nicko?
Nicko: wath ooh... I might not respond

The possible hidden messages maybe let us understand that they will play something from SIT ... especially Bruce likes to play with these things. Wacken announced but still unnamed of the tour, maybe something big is brewing for 2023. The covid has changed everyone's plans but in my opinion I don't think they skip the Senjutsu tour, they are very proud of the latest album. I think it's very similar to A Matter of the Beast summer tour 07 ... in this case Senjutsu + SIT + the usual classics. Maiden know they can no longer hide for Alexander The Great and the cover of the new beer sounds very familiar to me ... Stranger would be a resounding return after so many years. For the moment we travel with our imagination .. we will get a clearer idea very soon, perhaps just by looking at the poster of the tour. Whatever it is will be as great as ever ... and in all honesty, I can't wait to join. Up The Irons !! cheeers...

I can't find image of upcoming new Maiden beer. Stranger in a Strange Land Eddie is on the label?