Staff member
It's OK but not something I'll be listening to a whole lot in the future. When it comes to power metal, new Powerwolf album slays Helloween this year.

Yax said:
A couple of months later - How do you guys think the latest record holds up? As for me, I don't spin it as much, but I stand by my initial assessment that this is a really, really good record. It is definitely the best since The Dark Ride for me. The average song quality is very high, but it does lack a song of "Keeper of the 7 keys", "Eagle Fly Free" or "I Want Out" level of quality, although I think Mass Pollution comes rather close. It's the top album highlight for me.
Click to expand...

The album is good. Agree about ''Mass Pollution'' - I will add ''Fear Of The Fallen'' too. The great epic ''Skyfall'' and the song that screams HELLOWEEN, ''Indestructible''. I mostly listen to these four classics (+ Pumpkins United).

I have trouble with listening to the whole album. But I have that with Helloween releases in the last 20 years.
In this case, some hard to bear vocal work by Kiske spoils the pleasure. Deris has been doing very well, I'm glad he is still in the band.
Last edited: Aug 6, 2021

Yeah, Deris is the one who brings it this time. He does his best vocals in quite some time.

Surprisingly the new album ranks quite low in my Helloween rankings, at least so far. It's lacking real standouts. The only songs that I often keep returning to are Best Times and Cyanide. If Golden Times and Save My Hide were included instead of Robot King and Down in the Dumps the album would be a lot better.

Anybody heard a new live album from Gamma Ray with new co-singer and with Ralph as guest on few songs?

Only 14 songs and 90 min.of music, a not too much for Anniversary concert.

I haven’t listened to the whole thing yet, but “Avalon” sounded pretty good. I’m hoping they’ll release a standalone Blu-Ray at some point.

WHAT?? Newly released footage of Ralf Scheepers on stage with Gamma Ray? Wait a minute ...

WHAT??? Ralf Scheepers on stage with Gamma Ray?

WHAT???? AWESOME newly released footage of Ralf Scheepers on stage with Gamma Ray?

Kai revealed (in an interview from last year) that he is preparing material for a new Gamma Ray album - tentatively to be released this year.

gazda said:
Anybody heard a new live album from Gamma Ray with new co-singer and with Ralph as guest on few songs?

Only 14 songs and 90 min.of music, a not too much for Anniversary concert.
Click to expand...

Yeah, it's a kinda short set for Anniversary concert (strangely, a song from Ralph's 3rd album with the band was not included).

The performances are very good.

Here is the full concert:

A new EP called Best Time will be released on May 20th (click here).

-> it will contain an exclusive alternative vocals remix of the song... probably with Andi on lead vocals.

The cover is classic Helloween: 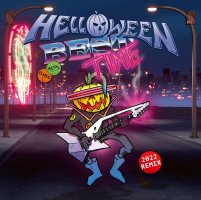 The alternative vocal remix could also include more of Sasha's demo vocals.


Anyone here going to either the Manchester of London shows?

Helloween started their 2022 tour two days ago (in support of their new album, I guess):

''Straight Out Of Hell'' is a great song.

The stage set is almost the same as for the previous tour, but they added a giant inflatable pumpkin on stage:

Only three new songs is a joke. Fear of the Fallen should definitely have been played.

Somehow I missed that:


It's one of my least favorite songs from the album, but live it sounds better.

We need ''Fear Of The Fallen'' and ''Indestructible''. I thought they will play ''Out For The Glory'' for sure.