LooseCannon said:
Google is encountering the same problem now with the term "Google it".
Click to expand...

But the phrase highlights Google's domination of the search engine market. I can't see what the problem is for them. It's free advertising.

This particular case feels like Shadow Tobias Forge is trying to take ownership of the word "ghost". It's a commonly used word in the English language and I'm sure there are plenty of brands which use that word in their name. Where will it end after this?

Staff member
Ghosts will be sued for being ghosts?

I don't know on this one. The brand could be mistaken for an official Ghost product, especially with the Papa-like skull on it. If Ghost are planning to launch their own range of booze - which every other band seems to be doing - then there could be a clash of interests.

I feel like they should have checked on this before releasing their own line of booze.

Staff member
Before this I'd never heard of Ghost vodka admittedly and I'm no stranger to the liquor store so can't blame the band for not knowing this UK brand existed.
@Cornfed Hick makes some very good points about the legal side of things but I agree with @Mosh and @MrKnickerbocker that this is basically a non-story being hyped up for publicity reasons. All publicity is good publicity eh?

Natalie said:
Before this I'd never heard of Ghost vodka admittedly and I'm no stranger to the liquor store so can't blame the band for not knowing this UK brand existed.
Click to expand...

I can't speak for your alcohol tastes or wealth levels, but the vodka was launched in Fortnum & Mason which caters to the 1% so it's probably no surprise that you haven't seen it in the liquor store. Ghost's management should have done their homework on this though. They have no excuse.

I did a bit of Googling (might get sued for that) to see if there have been any other such cases regarding the word "ghost" in alcohol names. There are a couple of beers with "ghost" in the name, such as Adnam's Ghost Ship and one called Centurion's Ghost, but there is also a New York company called Dutchess Ales who had a Ghost Beer which was renamed G.B. Pale Ale in February. Perhaps they were also issued with legal action by Ghost's management? Are you aware of this @MrKnickerbocker?

Sure didn't Ghost themselves have to go by the name Ghost B.C. in the states for a while as well.

The vodka people have a new statement on their Facebook as a couple of images. It's all in text in the Blabbermouth article: https://blabbermouth.net/news/ghost...e-arent-willing-to-be-bullied-or-compromised/

Apparently they were contacted by the band in 2016 about a potential collaboration but the vodka people weren't interested. I suspect the market was of no interest to the vodka people because they'd have had to sell cheaper and therefore downgrade the quality of their product.

srfc said:
Sure didn't Ghost themselves have to go by the name Ghost B.C. in the states for a while as well.
Click to expand...

One of my thoughts earlier was: "If they bring out their own vodka, just call it Ghost BC vodka!"

Cornfed Hick said:
This sort of trademark dispute happens all the time outside the music business too. A key issue is likelihood of confusion: if you are a fan of Ghost (the band) and heard they are making a Ghost-branded liquor, and if you want to support the band (or just think it’s cool) and buy that liquor, might you be confused and accidentally buy the Ghost vodka instead? Particularly since its skull logo looks a lot like at least one Papa? Maybe?

If so, and if the band (or, Tobias’s company, technically) has legally trademarked “Ghost” for the sale of spirits in the EU, then that’s a real basis for a case. That said, the vodka makers say they came to market first with the Ghost brand, so we’ll see whether they have a good argument under EU law that Tobias’s trademark is invalid as to liquors and spirits (as distinct from music) due to the prior use of the mark since 2015. I don’t know enough to handicap this. The aggressive, mocking tone coming from the vodka makers suggests they have no interest in taking a license or paying a royalty, so a collaboration seems pretty speculative at this point.

I may be in the minority here but I think, because most artists don’t make any real money from the sale of their actual music anymore and also cannot tour these days, trying to protect their merch IP as a business asset is very reasonable. If Tobias has a valid trademark and the vodka infringes it, then he should win, and he’s not “petty” for enforcing his commercial and creative rights.
Click to expand...

I agree with you... in theory.


Just another good news after discovering that he has moved his desired audience from angsty teenagers to angsty toddlers. I mean, last week we turned on the radio in the car after a very long time and we were confronted with Kiss the Go-Goat. Like, seriously, what the fuck? It was only after I started recognizing all the "edgy" lyrical content when I said to wifey that I'm betting it's Ghost and that after Rats already nothing suprises me. And she didn't believe me, actually (we both used to be fans of the debut for a while).

JudasMyGuide said:
we were confronted with Kiss the Go-Goat. Like, seriously, what the fuck?
Click to expand...

It’s a comedic take on ‘60s music with the Ghost sound. If you’re reading into it as anything more than that, you’re doing it wrong. 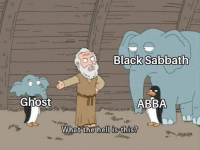 JudasMyGuide said:
I mean, last week we turned on the radio in the car after a very long time and we were confronted with Kiss the Go-Goat. Like, seriously, what the fuck? It was only after I started recognizing all the "edgy" lyrical content when I said to wifey that I'm betting it's Ghost and that after Rats already nothing suprises me.
Click to expand...

Just listened to this song. Freakin' greating, if you ask me.

If only. It’s much more like Bachman-Turner Overdrive and Boney M and I’m still being kinda generous...

A new Ghost album coming this winter. Not much else is known at this time.

Collin said:
A new Ghost album coming this winter. Not much else is known at this time.
Click to expand...

Where’d you hear this news? I love Ghost!

Looking forward to it! Hopefully it’s as good as Prequelle, if not better.
M

Prequelle is good, but I far far prefer Meliora. I am pleased that I got my hands on a Scandinavian version of the vinyl box set, that thing is dope!

chaosapiant said:
Where’d you hear this news? I love Ghost!
Click to expand...

Kerrang reported on it today.
This is extremely exciting news, I really enjoyed Prequelle (and their previous work but I feel they really nailed Prequelle as an album). Something to look forward to in 2021!