Fear of the Dark

What a surprise this album was for me. Just finished listening to it, and I actually thought it was a stinker. It's been a while since I heard through it, and I can't say I remember it being a good album. Except for maybe the two worst moments in Maiden's career ever (Apparition and Weekend Warrior) it's all very good.

The closing number and title track is an absolute classic. It’s a masterwork from the sweeping, almost storybook-esque intro to the romping verses, anthemic chorus, and glorious guitar harmonies. This song would become a concert staple and the live versions (especially Rock in Rio) are even better than the studio recording. Fear of the Dark is a song of pure magic that stacks up with any of Maiden’s golden-era recordings.

Staff member
It may not be the finest work of art, but god it's catchy. Superb live crowd involvement song with great atmosphere.

Staff member
There's no denying this song is ranked among the Maiden classics because of its live power. This studio version actually sounds a bit better than I remember. Maybe it's because I just endured Weekend Warrior and at this point just about anything is better, but the energy is definitely there. I can see how this would be a fun live song, although the intro is really slow on this. Once it gets going though it's fun to listen to. Still not my favorite Maiden tune, but it ends the album on a mid to high note. Great guitar melodies throughout.

A classic. Superb atmospheric intro then that marvellous sudden tempo pickup. The pace changes in fact are what stand out most to be on this track. I like the way they cut in suddenly and there's several clever variations on it.

Lyrics are creepy and effective unlike other similar efforts from this era which come off as cheesy.

For this song, I personally prefer the Rock In Rio version to the studio one. It's just much better. Not that the studio version is bad or anything like that, but it's just not good enough. It's still very strong though, even on studio. A breath of fresh air after the dreadful "Weekend Warrior". 9, because we're talking studio versions.
Last edited: Jun 17, 2018

Fear of the Dark is always among the best songs in any given concert, and it’s no coincidence. Some people complain about overplaying, but looking at the results it would be stupid for them to not play this one. The studio version is great too though, it’s just that because of the way the song is, it just has to be more enjoyable and emotional live. FOTD is most likely Maiden’s worst album, but not having this song would have been a huge loss. 10/10

It is a tremendous achievement for the to reach into the well in an era they were so creatively spent and create a definitive classic that stands up with anything they've ever made - the Rock in Rio performance meant so much to my appreciation of music and the kinetic theater that is live music.

That said if they never played it live again I would also die happy.

8/10, works better live than on the studio album

A brain dead intro leads into a very nice soft groove for the verse and chorus. Bruce's delivery is a bit uneven, but it generally works well.

This cuts into the heavy version of the verse and chorus, which works even better. I'm not a big fan of the lyrics here, but it's musically successful.

The interlude revisits the intro at higher speed and is pretty forgettable until it reaches the strong solo section. This rolls into a decent bridge, then returns to another round of verse and chorus before returning to the soft feel for the outro.

I think this song is generally overrated and played far too often on tour, and while I wouldn't personally consider it a classic, it's still very good. 7/10.

The first maiden song I loved. It will always remain as a 10/10 song for me.

A great intro leads to a calm section with one of Bruce's most haunting performances. The song then erupts into a classic Maiden flurry, filled with a great riff, great vocals, great solos, and a lot of bite and power all-told. It's a live staple for a reason, and the album version is pretty damn good too. Great closer as well. 9

An all time classic! My favorite Maiden song. Love the opening riff and the calm part at the start... one of the best parts of the song (Bruce shines here). The song is full of great harmonies/melodies! The melodic riff is a classic. Fantastic verses, lyrics and chorus!!! The twin-lead guitar harmony before the solos is outstanding! The two solos are also great, especially Janick's one. Wonderful drums through the whole song (through the whole album actually. Nicko really shines on this record). The song ends calm (just like it starts) and live this part is always epic - the beginning too. The favorite song of the fans. This song will lives on and on... 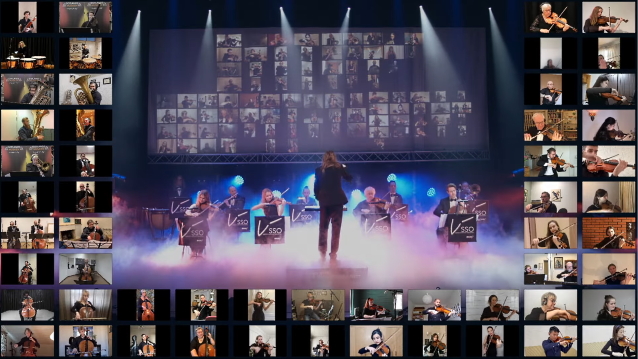 Over a hundred musicians from all over the world have united to perform the classic IRON MAIDEN song "Fear Of The Dark". The idea came from Ulf Wadenbrandt, conductor of the Sweden Symphony Orchestra and principal guest conductor for the Russian Philharmonic Orchestra. Wadenbrandt normally...

It lacked the power of the original.

That was fucking amazing. Give me an album of that.

This makes me a bit emotional to be honest. So beautiful... the whole thing but those strings ..... wow.

And that dude's moves remind me of Bruce haha!

I'm 100 percent sure this would please Steve Harris (if not the whole band).


(I've been in Trollhättan, more than 30 years ago)

The theme of the prevailing fear culminates in this piece
in the lyrics of this album. The lyrics approach one of the most
man's instinctive and deep-rooted fears, his fear
of darkness. According to Dickinson, Harris wrote the lyrics
inspired by the fear he has of the darkness he has
described as "fear of the unknown and loss of control".
You must log in or register to reply here.
Share:
Facebook Twitter Reddit Pinterest Tumblr WhatsApp Email Share Link
Top