I'm on my fourth listen so I feel as though I have developed a pretty good grasp of it.

The One You Know: Awesome track. The chorus is outstanding! However it should not be the opener for the album as I think the title track would work better there. This would go better towards the end of the album. Can't wait to hear this one live!! 10/10

Rainier Fog: The band has a very deep personal connection to this one, and you can definitely hear it! This one feels like it came straight off of Black Gives Way to Blue and has some parts that sound a lot like Check My Brain. The breakdown around 2:30 has a pretty emotional feel. 9/10

Red Giant: I'm really surprised this one wasn't made a single. It feel's like the successor to Stone. The main riff is absolutely massive and dominates the entire song. It really caught my attention during my first listen and I've had to come back to it a few more times since. 10/10

Fly: After a really good start it dies down a bit for the next two songs. I haven't really connected with this one yet. It's just kind of bland and feels like they've done this one a few times before. It sounds like it came from Tripod (heaven beside you??) and has some lyrics that are reminiscent of Jet City Woman. However the solo is one of the more memorable bit's of the album. 6/10

Drone: I was very excited for this song as it was the second longest on the album after All I Am. I was hoping for something like Acid Bubble or A Looking in View, but this one is just a bit of a let down so far. The main riff repeats throughout most of the song and is honestly a little annoying. It drags on a little long. The best part is the acoustic bit in the middle that Chris DeGarmo plays. Jerry of course delivers a great solo! But then it goes back to the painful verse. The fade out was very unexpected yet pleasant. 7/10

Deaf Ears Blind Eyes: This one was absolutely the most surprising as I was expecting this one to be kind of a filler. It's signature Alice in Chains but this is a whole new territory. There's a key change in the second half that takes the song to a whole new level! 10/10

Maybe: Another slower song. It still gives me vibes from Choke, It's not a bad thing though! Chorus is the highlight! 10/10

So Far Under: I'm still torn on this one, I can't tell if it's good or bad. Chorus annoys me a bit, but I love the intro riff. Great solo too. We'll just give it a 7/10

Never Fade: Another song that sounds like it came from BGWTB. Like Rainier Fog the band definitely has a deep emotional connection with this song. Amazing song! 10/10

All I Am: The band described this one as Led Zeppelin influenced, but I don't hear it. All I hear is Alice in Chains!!! This is the most depressing song they've ever done beating out BGWTB and Hung on a Hook. I'm addicted to this song. By far the best on the album! 10/10

All in all it's a great album. It's definitely better than Tripod, but I don't know if it's above BGWTB, definitely not Dinosaurs. I'd rank them like this..
1. Dirt
2. The Devil Put Dinosaurs Here
3. Facelift
4. Black Gives Way to Blue
5. Rainier Fog
6. Alice in Chains

Well I'm tired, so I'll give a proper review once I'm awake and gone over the album again. The guitar work I think was very good, some really great parts, a nice mix of their previous styles in one album, some great riffs but also some really good slower ones. Also thought the title track was pretty nifty too

Saw them opening night, Never fade and the one you know where great live. Wasn’t as much of a fan of so far under

Staff member
I thought the album was really bland and forgettable

Not that forgettable if you remembereed it was bland.

Night Prowler said:
I thought the album was really bland and forgettable
Click to expand...

It will click eventually. I wasn't the biggest fan of the first listen.

Took a listen to "Red Giant" earlier. Really enjoyed it, even though it wasn't quite what I was expecting from others reviews. My album is on its way, also ordered one of these cool shirts from the AiC store.

Listened to the DeGarmo track, sadly it sounded incredibly generic.

Overall I thought it had some great tunes, it wasn't 10/10 all the way through and some parts could be generic but as a whole I thought it was a good effort.

Have to admit tho, I haven't latched onto Red Giant as much as everyone else

Had the album on during my drive to work. Only got to "Drone" (it's a short drive), but overall first impressions are good. "The One You Know" and "Red Giant" are the strongest, though the latter wasn't quite what I expected. Given the "Stone" comparisons I was expecting another really ballsy, in your face, loud riff, but RG is a bit more subtle. Got a Tool feel from it at times. TOYK reminded me of the breakdown in Slayers "Raining Blood". "Rainier Fog" felt a bit generic-Alice, though I did really like the calmer section in the middle. I liked the intro of "Fly" but can't remember any of the rest. The main riff of "Drone" made me think of Metallica, maybe something off the Load/ReLoad era?

Good stuff so far, think it's going to take a few listens to get fully into it.

I’m a few more listens in. I’ll stand by my original comments, though I must admit I do like Fly and Drone a bit more now. So Far Under may be the weakest.

After a few full listens I'm sad to say I'm a bit disappointed. I won't totally write the album off yet, but very little of it is really jumping out at me as "great". "The One You Know" and "Red Giant" are still my favourites, not really hearing the connection to David Bowie's "Fame" in TOYK that Jerry talked about, but I like it. "Rainier Fog" and "Drone" are growing on me a lot more, especially the former. Still getting a big Metallica feel from "Drone", I can almost hear Hetfield singing the lines "Stepping in and out of madness/Such a dedicated drone". "Never Fade" I quite enjoyed, but I still wouldn't say it's anything special. "So Far Under" feels like a slightly reworked "Phantom Limb", nothing particularly unique. "All I Am" needs a few more listens for me to really get it.
Last edited: Sep 3, 2018

After having some time to digest the record, I think it's great! There is no hit single (like Check my brain) so it's a bit harder to get into, but once you give it a chance, it really shines. Every song (except Drone) has something amazing about it. In Rainier for it's the bridge, in Red giant it's the chorus, and in Deaf ears blind eyes it's the amazing riff.

The highlights of the album for me are: The one you know, Maybe and Never fade.

The title track Rainier Fog was played last night. Thus becoming the 6th song from the album played live. Only Drone, DEBE, Maybe, and All I Am are left. I could see them playing Drone while the other three aren’t ever touched.

And with six songs played, they have officially played more songs on this newer album than TDPDH. This really makes me wonder if they don’t feel really strong about that album. They treat it like Iron Maiden treats Somewhere in Time.

Collin said:
The title track Rainier Fog was played last night. Thus becoming the 6th song from the album played live. Only Drone, DEBE, Maybe, and All I Am are left. I could see them playing Drone while the other three aren’t ever touched.

And with six songs played, they have officially played more songs on this newer album than TDPDH. This really makes me wonder if they don’t feel really strong about that album. They treat it like Iron Maiden treats Somewhere in Time.

The drummer loses his right drum stick at about 0:22. You can see it flying in the air behind him and hear that he misses some hi-hat beats Also, that's a pretty dead crowd?

I love that song, I'm surprised it's taken this long for them to bring it out. Are they still playing anything from TDPDH?

Just Hollow and Stone. I don't think they will ever play another song from the album again other than those two.

I think it is because Jerry puts TDPDH and AIC (Tripod) albums on the bottom of their discography (source: https://noisey.vice.com/en_us/article/8xedag/rank-your-records-alice-in-chains-jerry-cantrell). If we look at how much songs they play from each album on the shows, I would say this list makes total sense.

I am really glad that he is confident with RF, and hope to hear Maybe performed live in the future. 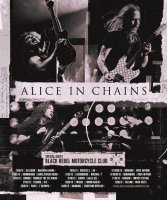