The Writing On The Wall

The album is full of fantastic melodies, but the triple-lead guitar harmony in this song is still one of my favorites.

The Writing on the Wall - 8/10 - I liked this when it was released back in July and somehow like it even more within the context of the album. Adrian's solo is great and I love the harmonies. I can't disassociate this from the video (and how excited we all were on July 15) so that plays in my head every time I listen to this song.

I really like this song a lot! It's got a great rhythm and some killer, almost Wild West sounding riffs. Definitely boosts the momentum of the album's flow after the previous two songs for me. The animated music video for this song was also a lot of fun!

Curious fact: This song and ''Moonchild'' are the only songs written by Adrian that contain an acoustic intro. (''Journeyman'' is a fully acoustic song!).

''The Writing On The Wall'' was initially without it, as we can see from the picture of Kevin Shirley's diary.

A unique, groovy-as-hell addition to the Maiden discography. It's incredibly different, nice and bluesy, and just a powerhouse performance from Adrian Smith. One of his best solos of all time. The lyrics are simplistic, but I think that works for the song (especially considering they're more well written than half of Steve's "epic" syllable lyrics on the rest of the record).
S

First live rendition of the song?

I just fucking love this song. Really a perfect song from Bruce and Adrian. Cant wait to see it live

Patrick92 said:
I just fucking love this song. Really a perfect song from Bruce and Adrian. Cant wait to see it live
Click to expand...

That should sum it up quite nicely
T

This song is amazing, I always love when maiden do new things and damn this one was new and unique, but also very inspired a great song overall, a born classic song.

Still one of my favorite songs on this record. Some great melodies, some great singing, some huge riffs/drumming and some excellent solos.

A lonely desert with sun overhead. A rattlesnake basks sleepily. Vultures swirl overhead. All is still - and then comes along a lone traveler with a guitar and ROCKS the FUCK out. The acoustic intro doesn't overstay its welcome at all, it sets the tone and then H turns up the amp to 11. As soon as I heard the riff I knew it was an Adrian composition. He's dabbled with western sounds before, most notably with Psycho Motel, but this is really the first time he brought it to Maiden. And man does it sound good. There's some acoustic strumming in the background providing a folksy balance to the heaviness of the electric distortion. Nicko is the real MVP in the opening sequence. His drumming is such a big part of what makes this song work, constantly shifting forward until we hit our big entrance. I also love how 'Arry slides in with his bass, beefing up the sound amidst the onslaught of guitars. And finally, we make the final ascent into the song proper as the drums crash and find a steady beat just in time for Bruce to come in and tell us about how fucked the world is.

"The Writing on the Wall" is such a good fucking song. It's a bit of a grower, too, though. My first listen didn't impress me all that much, but I kept spinning this song until I really, really got it. It's not pushing any boundaries, but it gives you exactly what you want from an Iron Maiden single. Bruce delivers a powerhouse performance, truly. The simple chorus is so fucking effective that it makes you want to start wailing right alongside. The instruments are played impeccably and are utter proof of Maiden's domination over the metal genre even this late in the game, about forty years after they released their first record!

And then you have the solo section! Davey is being overshadowed in discussions here. My god does he deliver one of his best pieces in like twenty or thirty years. That's a great fucking solo. And then when H lets it rip and delivers possibly the greatest solo in Maiden history. Holy fucking shit dude. What the hell. This song is a statement, a statement to the world that Iron Maiden are still the best in the game and still hungry and fired up to deliver great music.

It never lets up. What a fantastic single, well worth the media build up and even better as part of the album as a whole. A perfect Iron Maiden song. 10/10

Western acoustic noodling paints a desolate mental picture, then a stomping folky rhythm with bass fills leads us into a soaring verse and a more thoughtful pre-chorus before breaking into a soaring, folk-infused chorus.

Another stomping interlude leads back through the verse, pre-chorus, and chorus, soon giving way to a strong solo. A short reunion-Maiden-by-the-numbers instrumental then blossoms into an amazing extended guitar solo before returning to the chorus, eventually slowing down for an atmospheric outro.

I was slightly disappointed when I first heard this track, but the song has grown on me more than any other song on the album to date, and now I think it’s excellent. 9/10. 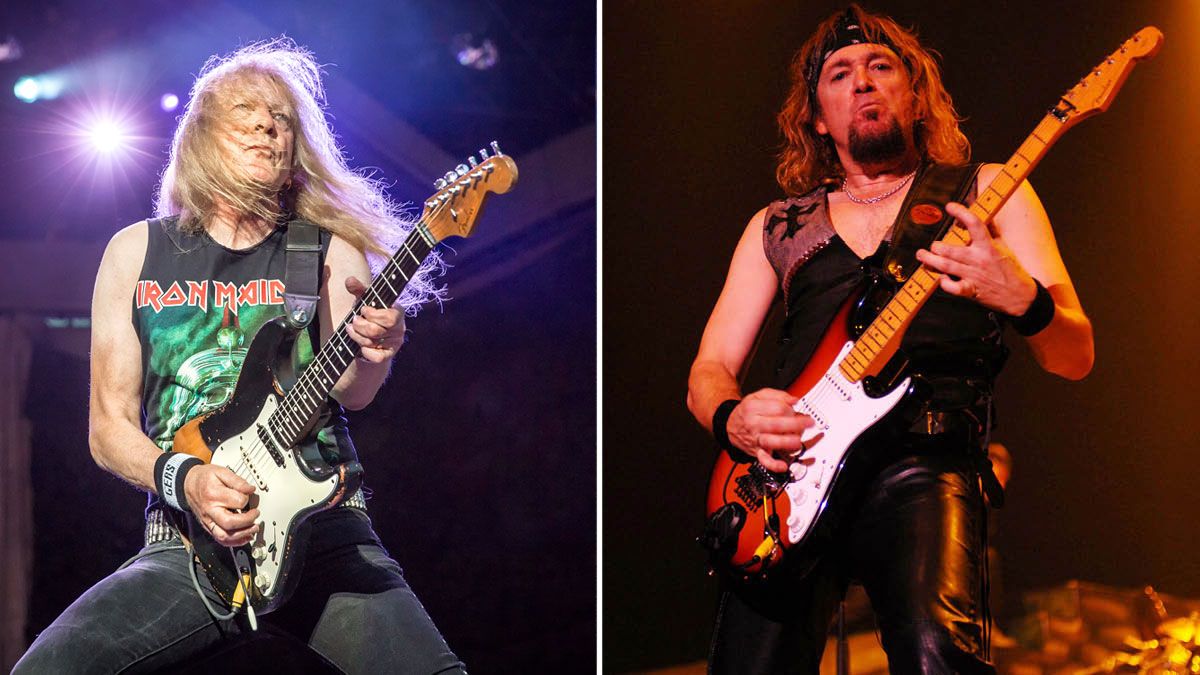 How complex songs and tricky time changes make for an epic record and a testing time in the studio, and why you don’t need a $3,000 guitar to sound like a pro...

^ Reading this interview again, we somehow forgot to mention this curious info: The main riff of the song is played only by Adrian and Janick.

''We had a lot of trouble with that main simple riff in the D position. When three guitars play it, because of intonation, it never sounded right to me. Two guitars sounded right but three sounded a bit off. So Janick tracked the higher one and I played the lower one. And that part almost sounds like a horn line''.

If we're talking about the riff that starts at 0:24 (which I'd class as the main riff), I assume that means it's Dave on the acoustic?

Staff member
I'd always thought it was Adrian having fun with the acoustic guitar. Just been playing/attempting to play WOTW tonight and it's incredibly satisfying, sounds good with comparatively little effort.
E

Is it coincidence? :-D

Edington said:
If we're talking about the riff that starts at 0:24 (which I'd class as the main riff), I assume that means it's Dave on the acoustic?
Click to expand...

I think it's Adrian, he co-wrote the song and we talk about the studio version. Live, it could be different - like ''Moonchild'' live in 2008, the song is also written by Smith/Dickinson, but Dave played the acoustic intro.

Brigantium said:
I'd always thought it was Adrian having fun with the acoustic guitar.
Click to expand...

Kalata said:
I think it's Adrian, he co-wrote the song and we talk about the studio version.
Click to expand...

I'd assume that too (I think there's no question that he played the intro however), but there's very clearly three guitars playing that riff. If Adrian said he plays the low line and Janick plays the high one, then given Maiden's tendency to record live that obviously leaves Dave, I can't imagine him sitting that part out only for Adrian or Janick to lay down an acoustic track afterwards.

Nice review and analysis of the 1st single by the vocal coach and opera singer Elizabeth Zharoff (who secretly loves Bruce Dickinson and his voice).