Here, you can read other visitors' comments on 'Reach Out' as well as post your own. Any contribution to the commentary will be much appreciated, may it be cultural references relevant to the song (links to related websites, interpretations that may have been overlooked in the Commentary, and the like) or personal essays related to the topic of the song. Just be aware that messages that are either off-topic or too wacky may be deleted.
A

Personally it sounds more like ASAP than Iron Maiden.

Admittedly I like both, but in either context, the songs still very cheesy and crap.
T

Cheesy but fun song. Nothing bad about it, the vocals are very good and make a nice change, they suit the song more IMO.
T

yeah - this song wouldn't be acceptable on the album- its a great Bside though - and it does indeed sound like ASAP.

H's singing is really good!
A

it's definitely more on the "poppy" side, which H seems to appreciate more than enyone else in the band, but it's bloody good. Better than Bryan Adams, no doubt'bout'it. Nice voice, raw & mellow at the same time. H should go solo more often & take the mike on some more Maiden numbers as well, or try some discants the way Savatage do.
A

Man, I really gave this one four and a half! This song, with its good old riffs, just makes me feel good. Lovely singing indeed - Adrian is simply smooth [!--emo&--][img src=\'style_emoticons/[#EMO_DIR#]/smile.gif\' border=\'0\' style=\'vertical-align:middle\' alt=\'smile.gif\' /][!--endemo--] , and Bruce does a great job as backup vocalist. I love the bass line, the drumming, the whole sound. This is a regular pop rocker, but done by Maiden and that can be felt.
As for the message, what can I say? Cheesy? Come on, don't we all need a special someone in our life?

Happy the group that has such B-side material.

This has got to be the best B side they've ever done. It's pop rock yes. But this is just really really good! Wish Adrian would sing more!

I absolutely love this song.  By faaaaaar my favorite Maiden B-Side.  I think this song could have been a hit.  It's infectious.

Staff member
Sorry for bumping an old thread, but I have to ask: is it true that H plays bass on Reach Out?

The b-side "Reach Out" was sung by Adrian Smith, with regular lead singer Bruce Dickinson providing backing vocals. Smith also played bass and guitar on the track.
Click to expand...

No. It's a misinterpretation that came from Listen With Nicko series.

He's talking only about Juanita and That Girl, not Reach Out. Not that it matters - "recorded on ourselves" means that Smith and McBrain recorded the guitars and drums first. There's a clearly Dave Murray solo in That Girl. And you can hear Harris' playing on Reach Out.

I extended Wasted Years wiki article couple of months ago, now I'm going to double check parts not written by me.

A glorious piece of 80’s classic rock featuring Adrian Smith on lead vocals. Bruce sings backups for a change and oddly enough, it sounds amazing! We shouldn’t be surprised, as Adrian is the All-Powerful God of Songwriting and Performance. It’s a catchy song that probably planted the seed for Adrian to leave the band after the next album and start a solo project (where he would reunite with many of the players from Hackney).

I like this one a lot. Adrian has (or had?) a surprisingly good voice. Very comfortable to listen to. But that guy doing the backup vocals in the chorus.. Wow! Did he get a great career?

Very different for Maiden, but I like this side of Adrian.

I always dug ASAP and I like this song too. H does have a cool voice.

I think its a great song and Adrian has an awesome voice. I also like A.S.A.P's Silver and Gold album
Last edited: May 21, 2016

Would have been funny if the band had recorded this song under a pseudonym as an A side of a single...and it had been a hit!

I've always liked this song. Great riff, verses and especially the chorus. Adrian's voice is awesome (Bruce's backing vocals too). Nice melodies and solo. Very catchy song. I also like that the song carries the futuristic sound/vibe of SIT album.

Adrian about how he ended up singing lead vocals: 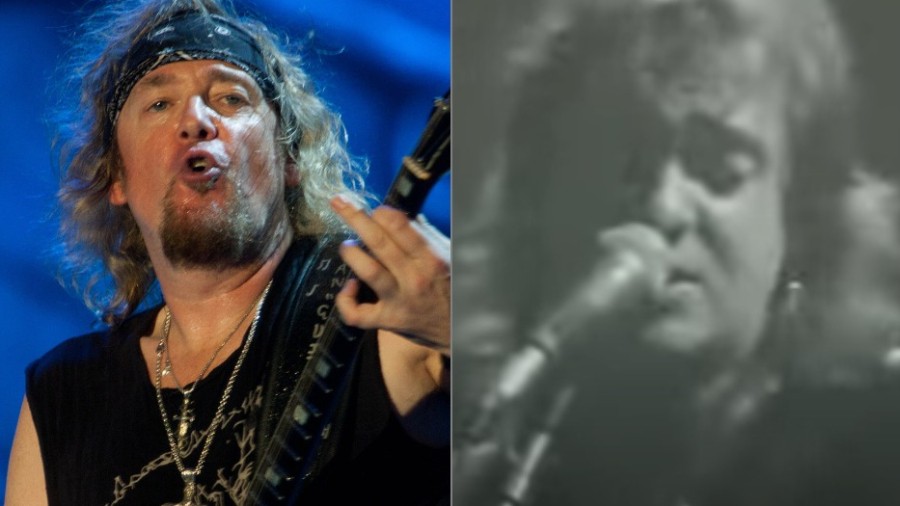 
"I think it was just before we did 'Somewhere in Time.' We had shock news, Maiden took six months off. This was in the mid-'80s, it was a big deal at the time because we never took any time off.

Rod Smallwood said, 'Yeah, go and have six months off, it's great.' and then Nicko and I ended up in the studio together - because we were always jamming and messing around at soundchecks.

So we got a band together what ended up being called The Entire Population of Hackney, and I drafted a couple of my old mates in.

A guy called Andy Barnett, the guitarist who played with FM, Dave "Bucket" Corwell, who played with Bad Company and Paul Rodgers, Nicko played drums, and we just used to go to a studio and play every day.

We did a gig at the Marquee club, we did a couple of clubs, and I was singing lead vocals at the time.

And from that, when we went to do 'Somewhere in Time,' we had to do some B-sides, so Steve suggested, 'Won't you do some of the stuff you did with the Hackneys?'

So we did 'Reach Out,' which was written by Dave Colwell, the guitarist, a good friend of mine, great songwriter. So we did that as a B-side.

It wasn't really a surprise - Steve's idea was as about as far away from Maiden as you can get, but you know, I sort of said, 'Alright, let's do it.'