Night Prowler said:
I couldn't sleep so I ranked my summer holidays as an adult last night. I got food poisoning on the 2013 vacation and it's probably the best vacation out of 5

Note to self: Never go on a holiday with NP.

I learned in school that if you align yourself properly with the moon, it has a good effect on your hair growth.


Not kidding. I... went to that kind of school.

How old are you? 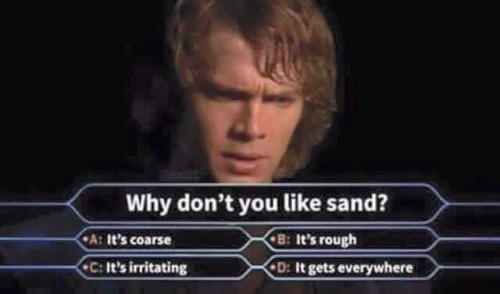 We have a Sith Lord in the making, people...

Staff member
From your point of view...

jazz from hell said:
I had a teacher who was somehow involved in the Goetheanum. Didn't have that much hair either.
Click to expand...

Well, as you guessed, my school was involved in the Goetheanum. I also have very little hair left.

Staff member
Should have paid more attention to the moon and less to heavy metal music.

If Janick was fired when Adrian came back, would he be bald by now?

Night Prowler said:
I think the best solution going forward for me is to skip all summer vacations. I don't even like summer. Or sunny weather. Or the heat. Or friggin' sand. I'm also a bad swimmer and don't really enjoy swimming altogether. I also hate getting a tan. Dunno why I even bother anymore tbh. I only really went on sea/summer vacations to hang out and rest and since I can't even do that...
Click to expand...

fekso said:
If Janick was fired when Adrian came back, would he be bald by now?
Click to expand...

I think the question should be this instead; if Adrian wasn't allowed back in by Steve, would he be bald by now?

Firing Janick was never an option for Steve.

TheTalisman said:
I think the question should be this instead; if Adrian wasn't allowed back in by Steve, would he be bald by now?

Firing Janick was never an option for Steve.
Click to expand...

The baldness was halted by his return! You don't think? Why? (I'm not trying to be rude, I like to know what you base this on!)

I will check the Run to the Hills Biography now. Just a moment.

TheTalisman said:
I will check the Run to the Hills Biography now. Just a moment.
Click to expand...

I tend to be careful with the RTTH refrences, since it has many mistakes in it. But fair enough, I like to hear what it says about it!

"I think Janick was a little nervous to begin with, though - not once the decision was made but while it was being made - but I said, 'Look, this is not an audition, absolutely no way.' I told Janick he was a really important part of Maiden now and, if it means it's not working, that he was the one who stays.
By the time we actually got on a stage together, though, we'd written some songs, done interviews, and it just felt totally natural."
Click to expand...

Interesting that Steve would go with Janick before Adrian. Adrians songwriting made much of what Iron Maiden ever was.

Staff member
And Janick's songwriting is one of the big things that makes the Iron Maiden that is.

LooseCannon said:
And Janick's songwriting is one of the big things that makes the Iron Maiden that is.
Click to expand...

Which is easy to say at this point. But back then Janick wasn't the songwriter be later became.

fekso said:
Interesting that Steve would go with Janick before Adrian. Adrians songwriting made much of what Iron Maiden ever was.
Click to expand...

But he fucking left the band!

Staff member
Why are people so picky about food, and why do people stand for it?

So, on Sunday evenings, I frequently run an RPG for friends. Some weeks we go to a particular friend's place, and she often cooks dinner. Which is perfectly fine, though I've made clear I don't think it's necessary. This week, she announced she was making tourtiere (a Quebecois dish, essentially a meat pie). No problem. I get there, and she had made pulled pork for me, because once we had tourtiere at another person's house and I wasn't the biggest fan of it. Leaving aside the fact that I wasn't the biggest fan because it was a shit dish bought in the frozen section of a store, I explained that I certainly would have eaten anything that was made for me. Which set off this big thing about how because she is super duper picky, she doesn't want anyone to feel upset if there isn't food offered that they might like. Like it is a worry.

How do people live with this attitude? How do people fucking survive? Food isn't supposed to taste good. It's fuckin' fuel to keep you going. You eat it, so that you aren't hungry. Everything else is window dressing. Sure, if I have an option there's a handful of dishes I will avoid (generally, they are garnishes), and I can't eat shellfish due to death-level allergic reactions. Beyond that? People who have fucking panic attacks because they prefer a different brand of hot dog (I have seen this, recently), or people who refuse an entire section of food because they once ate one part of it and decided they didn't like it. I have a friend who won't eat meat off the bone, despite the fact that all meat is off the bone. Won't eat sausages "because they're full of gross stuff" but will eat hot dogs, but only if the hot dogs are all beef. Won't eat homemade macaroni and cheese but will if it's made at a restaurant.

Sometimes, I want a fucking nuclear apocalypse to happen so people like this will shut. The. Fuck. Up.