Producers have more say in movies than people think, but if he finds the right director he might give him blue print and leave him be. Nice link Snake!

Staff member
Just watched School Of Rock. Jack Black is great (maybe a little over-the-top), and of course the music is great.

Onhell said:
Thank you for the feedback Fugazi.
Click to expand...

My Pleasure Onhell, thanks for the friendly tip, I will keep it in mind when posting in this thread.

Onhell said:
Thank you for the feedback Fugazi.


In a bit of apparently old movie news; Christopher Nolan has confirmed a second and according to some articles FINAL sequel to his Batman franchise. The new movie is The Dark Knight Rises (LAME IMO), and stated the Riddler would not be the villain (double lame), Anne Hathaway is playing Catwoman (sexy!) and according to IMDB at least one of the bad guys will be Bane. Also the Joker has been recasted ( ). It is set to release summer of 2012 (just before the end of the world!). Let the rumors and speculations begin! Or continue in some cases.
Click to expand...

This is one movie I actually look forward to. I saw Dark Knight and it was awesome. Now I need to get around to watching Batman Begins.....

I'm sure many here have seen this, but the Nostalgia Chick discusses Oscar nominations:

Some photos from the shooting of the film adaptation for Jack Kerouac's On The Road:

Watched a few movies in the last three or four days:

25th Hour (http://en.wikipedia.org/wiki/25th_Hour) A drug dealer (Edward Norton) lives his last day as a free man before going to prison to serve a 7-year term. The ending was EPIC. First movie to show New York (and even the Ground Zero area itself) after 9/11. A very good one.

Escape From New York (http://en.wikipedia.org/wiki/Escape_from_New_York) A bleak, dystopian action movie set in an apocalyptic 1997. Snake Plissken (Kurt Russell) a former US soldier (the youngest one to be decorated by the President itself) is sent into New York (which has been turned into a maximum-security prison) to rescue the President and the suitcase he carries from The Duke, leader of the inmates. I thought it was a good movie and the ending had me almost crying from laughter (in a good way, it's genuinely funny) but I think it lacks something. Maybe the tone is too serious, even for such a dark movie.

Big Trouble In Little China (http://en.wikipedia.org/wiki/Big_Troubl ... ttle_China) This, IMO, is a better movie than Escape From New York. It has a weirder plot that mixes comedy, action, science fiction and ancient chinese mythology in an entertaining way. Kurt Russell also gives a better performance as the not-quite-hero main charachter.

Dead Man (http://en.wikipedia.org/wiki/Dead_Man) Now THIS is a strange movie. A twisted, black-and-white, absurdist western movie. William Blake (Johnny Depp) travels from Cleveland to the company town of Machine by train to work as an accountant, but things are going to get much stranger than that. Entirely scored by Neil Young in an abstract, surrealistic style. Robert Mitchum plays his last role, as John Dickinson. It's impossible to pin down the "meaning" of the story, but it's a fascinating one nonetheless.

After reading that story last posted last week about Rochs Misch, I ordered the Documentary "The Last Witness" from 972 films (they specialize in Israeli films).

It was interesting, not a documentary in the traditional sense, the followed Misch around for a day or two, got comments from his housekeeper, daughter, and a WWII "historian" (I put this in quotes because his credentials were not spelled out and he seemed more interested in Third Reich memorabilia, but Misch had apparently helped him out with some drawings of the bunker.

This was an odd an interesting story, my thoughts

Misch:  He does not seem like the brightest guy, but does seem very friendly and I think genuinely thinks he is performing some sort of service by telling his story and talking to people and probably gets taken advantage of.  They file showed him offering autographs which he said he sent out all the time, go search his name on eBay and see what they are going for.  It is hard to tell if this is his intelligence, after affects from the war and some bad treatment afterwards by the Soviets, or his age.  If you read accounts by people on Hitler’s staff, they all referred to him as Der Chef versus Der Fuhrer and by most accounts was a great guy to work for and a great boss.  Some of them have trouble reconciling the man they knew versus what he did.  Misch does not deny the holocaust, but he seems to try to minimize it and absolve Hitler of much of the responsibility.  He also mentions individual Jews that Hitler employed or did nice things to as an argument.

The Housekeeper:  This lady is clearly not to sharp, she seems to see Misch as a celebrity and is enthralled with him, she pretty much repeats that bad things happened, but they were not so bad and maybe Hitler was not such a bad guy.

The Daughter: This lady has some problems, she barely saw her Dad until he came back from the Soviet camps and really harbors some kind of grudge against him.  She found some Jewish relative on her mother’s side of the family, married and Israeli and works to restore synagogues in Germany.  All that is fine, but it almost seems hold some deep hatred of her Dad and almost makes him out to be responsible for the Holocaust.  She resents why he is a celebrity of sorts and seems to wish he would have never told his story.  She also mentions she did not care for the movie Downfall as it humanized Hitler and seems to think Misch is doing the same thing with his stories.    She is a very bitter woman for reasons not really explained in the film

I found it pretty interesting, I wish it had been a bit longer (63 minutes) and had a bit more structure (you hear answers without hearing the question).

I've never been sure if Mitchums role as the head of the "Dickinson Metal Works" isn't some sort of hidden reference to a certain singer we all know.

Just saw a fantastic moment on BBC1 where Christopher Lee became a Fellowship member (and deservedly so!). He was very emotional, and very, very honoured. 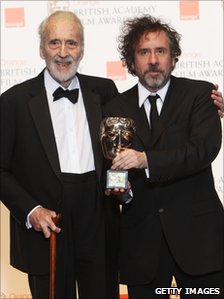 I saw that too, Foro. It was emotional. I thought the introduction speech by Tim Burton gave me a little smile:

"...in between heavy metal albums."

Not that I listen to them much, but he does appear to be on every other Rhapsody album. Despite his age, he's a busy man right now.

Here the video for everyone who missed it or for who wants to see it again:

I thought that he "suddenly"  looked old. The stick, the eyes... I hope his contribution in The Hobbit will go well.

Albie said:
I saw that too, Foro. It was emotional. I thought the introduction speech by Tim Burton gave me a little smile:

"...in between heavy metal albums."

Not that I listen to them much, but he does appear to be on every other Rhapsody album. Despite his age, he's a busy man right now.
Click to expand...

I have to say I've not heard it. It does sound interesting.

Perun said:
I've never been sure if Mitchums role as the head of the "Dickinson Metal Works" isn't some sort of hidden reference to a certain singer we all know.
Click to expand...

I'll look that up to see what I can find. I swear I hadn't thought about it.

A few days ago, I watched Michael Radford's 1984. I'm very happy with this movie. Richard Burton (sadly in his last role) plays the frightening, deadpan O'Brien, and John Hurt NAILS Winston Smith. The power of this film was enough to reignite the feeling of paranoid shock I felt after reading 1984 for the first time. A few dream sequences (and a couple other scenes that are best left unmentioned) are genuinely disturbing.

The Rite. Great to see Anthony Hopkins enjoying a role again, really fun to watch. Sadly, Colin O'Donoghue was boring. However the movie was a cheesy joyfest and as I said before the T-Hop was quality 3/5.

That's what I'm expecting. There really only is one The Exorcist and every movie since have been sad, pathetic imitations. But they're fun to watch. I'll wait till it makes it into the cheap theaters...

The Exorcist is an absolute gem and will probably always be he greatest possession movie ever but there have been worthy entries into the genre. Indeed Exorcist 3 is worth a watch for Brad Dourif's wonderful performance and there are some decent chills in it too. The Exorcism of Emily Rose is also worth a look. Great cast and the way they use science to discredit the supernatural element is very interesting.
You must log in or register to reply here.
Share:
Facebook Twitter Reddit Pinterest Tumblr WhatsApp Email Share Link
Top