I'm kind of glad. If they would have made a new album it would have probably been worse than Catharsis. That being said I thought they had a pretty good run with Through the Ashes of Empires - Bloodstone and Diamonds.

I was a fan when the first one came out and only listened sporadically since then. Some good stuff but I listened to half of Catharsis this evening. Well. Seems like quite the change and not an honest one, IMO. Seems like a stab at replicating some kind of metal that is popular in Europe, correct me if I'm wrong.
May they fare well, I'll never forget that first album at that time.

Flynn just released another statement clarifying this is the Farewell tour of THIS lineup of Machine Head. Machine Head will continue on, Robb just needs to do some soul searching.

Anyone wanna bet money that this gets weirder??

I'm surprised that they didn't leave earlier during the making of the turd of an album called Catharsis. Flynn writes songs like a 12 year old.

SixesAlltheway said:
I'm surprised that they didn't leave earlier during the making of the turd of an album called Catharsis. Flynn writes songs like a 12 year old.
Click to expand...

Exactly. Just look at the lyrics for Razorblade Smile.

I just did. Fuck me. Its hard to believe those are actual Machine Head lyrics.

The line about Mar-A-Lago and defecation really sums up the whole album.

Though I can't talk shit about the title track. I actually love that song.

I got punched by a dwarf at a Machine Head show. They bring in an odd crowd.

Let Freedom Ring! It is with great excitement that MACHINE HEAD announce the first leg of their 25 Year Anniversary tour for the band’s classic debut, ‘Burn My Eyes.’ The dates kick off in Germany on October 5th in Freiburg, and continue across Europe and the UK, wrapping in Dublin, Ireland on the 8th of November. The U.S. leg will be announced in due course; those dates are set for November into December as the tour makes its way around the globe.

Building on their wildly popular ‘An Evening With…’ format, these not-to-be-missed shows will be a three-hour musical extravaganza, comprised of two parts:

Part I - will feature a battery of MACHINE HEAD’s modern classics, such as ‘Imperium,’ ‘Halo,’ and, ‘The Blood, The Sweat, The Tears,’ featuring frontman/guitarist Robb Flynn and bassist Jared MacEachern performing alongside two, soon-to-be-announced ragers on guitar and drums.

Part II - will feature the Bay Area band’s classic debut album, ‘Burn My Eyes’ played in its entirety for the first time ever. And if somehow this historical event could not be monumental enough, taking the stage for this part of the set will be ‘Burn My Eyes’-era alumni and MACHINE HEAD’s original drummer Chris Kontos and original guitarist Logan Mader.

Band founder and visionary, Robb Flynn tells us “Having started rehearsals with Chris and Logan several weeks ago, I’m literally giddy with excitement at the prospect of how much fun this is going to be. Both Logan and Chris are in phenomenal playing shape, the vibe between all four of us has been incredibly positive!”

Flynn continues, “Having run through deep cuts like ‘Death Church,’ and ‘I’m Your God Now’ for the first time in well over a decade, has reminded me of how fucking heavy our older songs are! This tour is going to be MASSIVE!! The timing couldn’t have been more perfect to share this milestone with the Head Cases! So just a head’s up, DO NOT sleep on this! Tell your friends, spread the word, because tickets are going to disappear!”

Logan Mader adds, “It’s a huge honor for me to take part in celebrating ‘Burn My Eyes’ 25th birthday! It’s hard to believe this is actually happening. I feel like I won the guitar player lottery.... again! The fact that BME is still relevant today has a lot to do with the fact that Robb has kept the band alive and strong for two and a half decades. I’m very grateful for this!”

Chris Kontos echoes the sentiment, stating, “This is an absolute mind blower! Playing these songs again after 23 years feels just amazing. The fact that it's 25 years later and the BME record is still relevant and revered is humbling to say the least. Doing a huge world tour in celebration of the record is a great way to acknowledge the legacy of MACHINE HEAD’s past and future. I'm so looking forward to sharing these songs with the MACHINE HEAD fans around the world. Can't wait to meet all you ‘Head Cases’ out there! You can be sure it is going to be a crushing night! See ya soon!”

The Lord of the Low-End, Jared MacEachearn is equally looking forward to the run, saying “It’s not everyday that you get to pay tribute to a classic like ‘Burn My Eyes’ and with Logan and Chris in the mix, I’m really excited to bring something special to old and new fans alike.”

Tickets go on general sale at 10am local time, Friday 29th March, with pre-sale going live at 10am on Thursday 28th

An extremely limited amount of VIP packages will be made available to 40 folks (per show).

Think I might just accidentally slip and end up at Manchester...

Mehhh. Not my favorite album. But they're pretty good live, how they will do without Phil and Dave is questionable but I'd be interested in seeing this.

Pretty good setlist if you ask me.

Chris Kontos drumming on Burn my eyes is insane.Awesome. Good he is back for the tour. 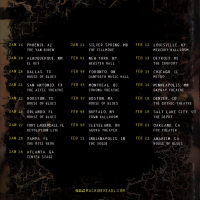 And just like that I jinxed it. Will not be attending.

I don't know man. Burn My Eyes is a great album but touring the anniversary seems like nothing but a stunt to make old and new Machine Head fans forget about Catharsis (and of course, also earn back what they lost on that album) If Catharsis had gone down the way Flynn hoped and it had been a success, they would have done nothing to pay tribute to the debut album. Fact.

Good thing we can still watch old Machine Head tear it up.

SixesAlltheway said:
I don't know man. Burn My Eyes is a great album but touring the anniversary seems like nothing but a stunt to make old and new Machine Head fans forget about Catharsis (and of course, also earn back what they lost on that album) If Catharsis had gone down the way Flynn hoped and it had been a success, they would have done nothing to pay tribute to the debut album. Fact.

Good thing we can still watch old Machine Head tear it up.

It probably is. I personally like the newer albums more (not Catharsis) and I really hope they can return to greatness soon.

New song. It's better than most of Catharsis, but that's not saying much. 6/10

What a baby. Can’t take the fact he ripped off some more lyrics and nobody likes his new song.

Yet another shit track by Machine Head. This is becoming a common trend. Even worse than the last one. I hate to say it but I think I’m giving up on this band.
You must log in or register to reply here.
Share:
Facebook Twitter Reddit Pinterest Tumblr WhatsApp Email Link
Top