This band will always carry some sort of controversial aura with them. You've got people who say: don't touch that stuff. You can't do DIO songs without Dio. So basically, the tribute aspect (as it started out) is condemned.

And now it seems these guys are making new music. So it can be argued that they use everything surrounding DIO to attract attention, to help them doing other stuff (as well).

Personally, I think these guys will make money by using the past, but I can imagine that there's an urge to do this. They like to play together, and let's be honest: this classic DIO material deserves to be heard! And why not by the people who were part of the creation process? They were part of that past.

Still, (especially) for their new album, they could have picked a different name for their band, to make all this less blatant. Name aside, I am curious about the new music these guys are currently producing in the studio.

Meanwhile, I think this is fantastic. Vinnie Appice is great. Love to hear and watch(!) his drumming. Campbell still shines on guitar, but most important: this band stands!
Egypt has always been my number one DIO song, and I don't remember having ever seen or heard a "normal" live performance. It was always cut in half (or connected with another song or something). I never liked that. It was annoying, it disrupted the growing atmosphere. Please correct me if I am wrong: If someone knows a normal live version sung by Ronnie James Dio, please show me.
Last edited: Mar 21, 2015

Staff member
It least in the beginning, there was an effort to say Dio was a band, not a Ronnie solo effort.
I have no issue with former members of the band getting together to play songs they helped create, or making new music together.
I took issue with Campbell's comments about Ronnie. I would like to know what he is saying now and how sincere he seems.
Last edited: Mar 23, 2015

The hatetalk wasn't just going in one direction, was it? Anyway, before that happened the music was the best that DIO had ever produced. When they were band, not a solo effort.

Vivian Campbell... he was that guy that was waaaaay better known that H in the 80's, right?

Staff member
As far as I know, Vivian and Dio never reconcilled before Dio died and after that Vivian was like "oh, sorry, didn't mean anything, now I'm gonna play his music and earn money off his songs". Which is fucking lame + Vivian is a major poseur.

Well, I personally found Dio's comments more out of line, so I don't see a clue in being more angry about Campbell than about Dio. Anyway, we can probably blame both for not reconciling.


Night Prowler said:
As far as I know, Vivian and Dio never reconcilled before Dio died and after that Vivian was like "oh, sorry, didn't mean anything, now I'm gonna play his music and earn money off his songs". Which is fucking lame + Vivian is a major poseur.
Click to expand...

Saw these guys on Sunday at KKs Steel Mill venue.
This gig brought back fond memories from the original Dio tours I saw back in the early 80s.

Vivian can still rip when he wants to! It was also great to see the powerhouse Vinnie Appice so close to the stage.

If you like Dio, go see these guys, as it's the closest you'll get, with half of the band being the only original surviving members - totally blew me away!! Well worth getting to bed at 3am with work the next morning!

Here's the setlist and some pics (2nd row) 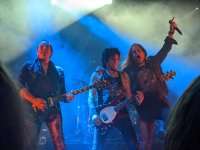 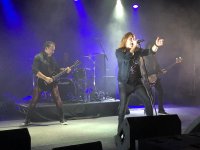 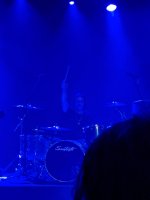 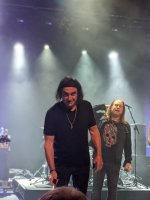 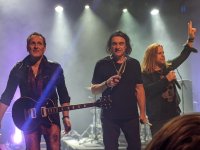