I'll happily see the end of this Tory government. Back when David Cameron became leader of the Conservative Party, when they were in opposition, there was emphasis on modernising the party and making them appear more accessible. Now Theresa May and Boris Johnson have dragged the party back into the dark ages. Boris makes Theresa look strong and stable, and Theresa made Dave look like one of the greatest PMs ever.

The Conservative MPs who voted against the government have had the whip removed, which basically means they have been expelled from the party. This includes the previous Chancellor Philip Hammond, the longest serving current MP Ken Clarke and Nicholas Soames, the grandson of Winston Churchill.

Black Wizard said:
I'll happily see the end of this Tory government. Back when David Cameron became leader of the Conservative Party, when they were in opposition, there was emphasis on modernising the party and making them appear more accessible. Now Theresa May and Boris Johnson have dragged the party back into the dark ages. Boris makes Theresa look strong and stable, and Theresa made Dave look like one of the greatest PMs ever.
Click to expand...

Theresa May looks like a progressive figure and a real stateswoman compared to the charlatan we now have (and hopefully not for long) as PM thanks to 90000 old white men (some would say gammons) who elected him as leader of the Conservative party.


Black Wizard said:
The Conservative MPs who voted against the government have had the whip removed, which basically means they have been expelled from the party. This includes the previous Chancellor Philip Hammond, the longest serving current MP Ken Clarke and Nicholas Soames, the grandson of Winston Churchill.
Click to expand...

My local MP is also one of the rebels. I disagree with her on many things, but I applaud her (and have sent her an e-mail to let her know this) for what she has done.

Soames has voted against the Conservative Party exactly 3 times in his 36 years as an MP. BoJo has just tossed him out over it.

He turfs all these lads out even though he defied the whip himself a few months ago!

srfc said:
He turfs all these lads out even though he defied the whip himself a few months ago!

What an utter piece of shit he is!

srfc said:
He turfs all these lads out even though he defied the whip himself a few months ago!

It's different when Boris does it because reasons goddammit.

Reasons beats reason every day of the week

The PM has tabled his motion to dissolve parliament for an early general election. He needs two-thirds of MPs to support it to get the election.
Opposition parties are not going to back it and make him sweat it out and clean up his/Theresa's mess. There are still ways he can get engineer an election though.

In another crazy week in Brexitland we've seen parliament pass a bill legally obliging the PM to request an extension to the leaving date if he has failed to agree a new deal with the EU by the summit next month. Twenty-one Conservative MPs rebelled against the government to vote for the bill, shortly after the government had lost its working majority when an MP defected to the Liberal Democrats as the PM was speaking. The 21 rebels were then kicked out of the party for voting against the government, including two former Chancellors (the previous one Philip Hammond, and Thatcher's last remaining minister Ken Clarke) and Winston Churchill's grandson! Many of the remaining Conservative MPs are unhappy with how this was handled and have written an open letter to BoJo asking for the expelled MPs to be readmitted to the party.

I was reading this morning or last night that there were originally only going to be about 10 Conservatives voting against the government, but then Jacob Rees Mogg gave a speech daring to vote against the almighty BoJo. This backfired and resulted in twice the number of rebels as was initially expected. On Monday JRM appeared on a radio show and accused a respected neurosurgeon of fearmongering for saying that a No Deal exit would lead to shortages of medicine. He then compared the neurosurgeon to the anti-vax austism doctor in parliament - which he cannot be sued for under parliamentary privilege. The doctor dared JRM to repeat that in public but I think that JRM has since apologized after heavy criticism from the medical profession and other politicians. In what has generally been a terrible week for JRM, he was also criticized by MPs for lounging around on the House of Commons benches during a debate, demonstrating nothing but contempt for his colleagues and the matter at hand. This inevitably triggered multiple memes, for example: 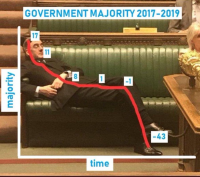 The conduct of the Prime Minister himself in parliament has also been deplorable. He didn't answer any questions in Prime Minister's Questions (it's in the name BoJo!) and resorted to name calling instead of engaging in any actual debate which made for a very unpleasant and hostile atmosphere in the chamber. He called Jeremy Corbyn a "chicken" and a "big girl's blouse", referencing Labour's refusal to vote with the government for an early General Election - the only method Boris can use to get himself out of the corner in which he finds himself. The reason that opposition parties are refusing to allow BoJo to call for an early General Election is that they want to wait until the delay bill is passed into law and they don't trust him not to change the date (who would?). He would happily have it after Halloween to make No Deal happen by default and has executive power to advise the Queen on which date the election should take place. To make his week worse, his brother quit as a minister and resigned from the party (on Twitter!) the morning after parliament refused to let him have an election.

I have said in previous posts that I was prepared to give BoJo a chance at being PM and to see what he can do with regards to negotiations. However, his decision to prorogue parliament and the manner in which he has conducted himself this week has left me deeply unhappy. How did this crazy man manage to win two terms as Mayor of London? All the positivity from his Conservative Party leadership campaign evaporated into a menacing and deceitful aura. Some of the documents detailing discussions with advisors about suspending parliament were presented to the courts this week during cases attempting to rule the suspension unlawful. In one of the documents BoJo wrote that the September days in which parliament sits were just a pointless show by "girly swot Cameron" - yes, he referred to a previous Prime Minster, from his own party, as a "girly swot". You couldn't make this stuff up!

There are also very serious concerns about the role of his special advisor Dominic Cummings - the mastermind behind the Vote Leave campaign - who some think is the one who is really running the country. I have been watching The Last Czars on Netflix recently, and one could make a valid comparison of the Romanovs and the Conservative Party, and between Gregory Rasputin and Dominic Cummings. He revels in his own notoriety, and whispers poison in the ear of the Prime Minister as the country edges closer and closer to oblivion.


At some point in the future I reckon HBO or Netflix should pick this up as a long-running TV series. This shit literally writes itself. The gift that keeps on giving. Move over Game of Thrones, there's a new show to grab everyone's attention. George RR Martin couldn't even get close to imagining the drama that has been British politics for the last four years. I can Benedict Cumberbatch playing JRM, and the first episode ending with Jo Cox's murder during the referendum campaign. I honestly can't wait to relive this.

Amber Rudd has now resigned from Government and quit the Conservative party. The clown has now even fewer moderate Conservatives supporting him.

Brigantium said:
Boris really does live in some children's story of 1920s public school japes, doesn't he.
Click to expand...

Sadly for us, he does.

From the Guardian, reporting on Johnson in Dublin this morning

"he was humbled by a brilliant question pointing out that, while he is happy to use “dead in a ditch” as a metaphor, Brexit undermines arrangements that have preserved the peace in an country where until recently hundreds of people did end up dead in ditches literally. "

John Bercow has just announced that he will step down as Speaker on Halloween, or today if MPs vote for a General Election (which they won't).

Black Wizard said:
John Bercow has just announced that he will step down as Speaker on Halloween…
Click to expand...

The_7th_one said:
Just the release date of "Day of the Dead"–in a ditch– beer …mmm

The Court of Session, Scotland's highest civil Court, has ruled that BoJo's suspension of Parliament is unlawful as it amounted to the "improper purpose of stymying Parliament".

This will go to the UK supreme Court though. 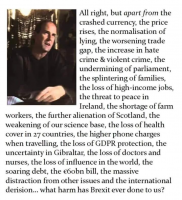 
People will look back in a few decades and proclaim that Brexit was definitely the best Monty Python sketch ever.
Last edited: Sep 11, 2019