Hiya, this is an overview of all officially released albums with current members from Iron Maiden playing on it. The albums that we are aware of.
There might be more! Who knows what else Nicko has done in the seventies!

This is only about studio albums and not about guest work: a member was on the album, fully involved.

I decided against listing Urchin releases. Urchin never released an album. Some people did without the consent of Adrian Smith. The released albums feature songs that were not produced and put in order with an album in mind (the band's or Adrian's mind). I see the Urchin songs as demo sessions. Some tracks were released officially on single. Most of it never saw the light, the artist never had an (achieved) goal with the material, or at least not yet to their satisfaction.

Provided by @Ariana, translated from an interview for a Bulgarian radio around the time of Awoken Broken release:

Adrian: As far as Urchin records go, I must tell you, those are things that we recorded on a 4-track analogue recorder (not sure that's the correct term, sorry!), in somebody's basement, more than 30 years ago. These people from the label you mentioned had no permission to release the records, not from me, or any other Urchin member. They didn't even ask if they could release them. I'm not that kind... but still they could have called.

Q: That's strange! I find it surprising they didn't get in touch with you.

Adrian: It's not very difficult to get in touch with me. They just didn't want to do it. They release some old demo tapes of bands they never ask for permission. If they had asked, I would've probably agreed, but these records are just not good enough. It's not much of a problem but I got a bit frustrated, that's all. I was surprised as well.
Click to expand...

@lira and all others, if you see some errors, or have other contributions, please let it know!
Also: if you think albums were released in a different order, let me know and I'll change it.
Click on images (divided in 20th and 21st century) below for bigger view. 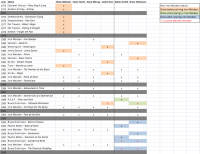 Thanks for compiling this information!

Nicko had a whole life before Maiden. 9 albums! More than Bruce was on non-Maiden albums in total.

Forostar said:
Cheers, my pleasure! Nicko had a whole life before Maiden. At least 9 albums!
Click to expand...

Really varied stuff too, which no doubt contributed to make him such an amazing drummer.

@Diesel 11, I believe this may be useful for your Maiden Radio thingie?

Yes there are a few things...

1) Downtown Flyers not "Flying"
2) What about Survivors album with Bruce? He recorded all the vocals in 1980 although the full version was only released in 2001.
3) I don't know if you're also considering BBC albums, but Streetwalkers released one in 1994 where Nicko played on 5/6 of the tracks.
4) You forgot the Gillan albums with Janick Gers: Double Trouble (1981) and Magic (1982)
5) Savage is the english version of Marché Ou Creve and can be considered another album as Trust rerecord everything.
6) I Will Be There is an EP but it was everything Janick recorded with Gogmagog. Just saying.

For the correction and other comments.

Biggest omissions are the Gillan albums. I even thought of these the other day. I don't do live albums (BBC sessions), EP's or new versions of albums (but if you say Nicko rerecorded all the drums for the Trust album, then that's certainly worthwhile).

I'll dive into the Survivors matter. I thought Bruce had nothing to do with that album, only recorded a few songs which were released way later.

Bonus tracks on 2001 CD re-issue with Bruce Dickinson singing
The above list is wiki info. I think I had heard this stuff (but I need to check again) but in my memory Bruce did not sing on all these songs. I could be very wrong though (perhaps I heard the wrong release). At least, I have never heard him doing Tomorrow or Yesterday.

Number 6 said:
@Diesel 11, I believe this may be useful for your Maiden Radio thingie?
Click to expand...

It might! I’ll look through this in detail later.

Bruce recorded the whole Survivors album (with the exception of "Koz" obviously). I have it. I also suspect the band overdubbed a few parts...

Indeed, this Streetwalkers record is BBC In Concert. But many others are made in the BBC studios. In that case, and I forgot to mention, there's also The BBC Sessions from Samson, released in 1997. Thing is... only the first four songs feature Bruce - so it probably won't fit in your table.

lira said:
Bruce recorded the whole Survivors album (with the exception of "Koz" obviously). I have it. I also suspect the band overdubbed a few parts...
Click to expand...

True, when they were recording Head On, with the aim of re-releasing it. That did never materialise and we only got to hear the material in subsequent re-releases of Survivors with bonus tracks.


lira said:
In that case, and I forgot to mention, there's also The BBC Sessions from Samson, released in 1997. Thing is... only the first four songs feature Bruce - so it probably won't fit in your table.
Click to expand...

Bruce played that session on his BBC 6 Music Rock Show and mentioned that he sounded like a lamb.

I sure would like to compare the two Trust albums and the two Survivors.

But I'm still not sure what to do with such re recording albums (or BBC sessions). It is not the same as an album with new songs. The creation/writing aspect (the most important one) isn't there. Bruce hardly mentioned doing vocals in his book (he was more busy saying he did not having anything to do with it) so I guess he doesn't care at all about it (anymore).

What I remember from these bonus tracks (I downloaded them once, not sure on which album they landed) is that he sounds terribly off key. Maybe that is why he rather does not draw attention to the Survivor re-releases.

These kind of releases might fit better in complete discographies but this overview might be about doing something (right in) one time.

2.
On the side: RR 4039-C
On the front: Including 5 previously unreleased versions by Bruce Dickinson
On the back: 1990 (copyright) repertoire Records West Germany Made under license by Rock Hard Records, London LC 8065

"Bruce Dickinson joined Samson in 1979 just as "Survivors"was released. Their first mission was to rerecord the lead vocals with a thought to reissuing the album. That never happened. The album you are holding now features the complete original version of "Survivors" and for the first time ever five of the Bruce Dickinson versions."
Tracklist: 13 songs. The original 8, then 5 "Alternative versions with vocals by Bruce Dickinson"
9. It's Not As Easy As It Seems
10. I Wish I Was The Saddle Of A Schoolgirls Bike
11. Six Foot Under
12. Inside Out
13. Wrong Side Of Time.

This explains why I've never heard "Tomorrow or Yesterday" (as mentioned above) or "Big Brother". I just thought this was it and did not think there was again another CD release. Time to buy another Survivors CD. :/
Last edited: Jul 21, 2018

GhostofCain said:
True, when they were recording Head On, with the aim of re-releasing it. That did never materialise and we only got to hear the material in subsequent re-releases of Survivors with bonus tracks.
Click to expand...

True. There are, as far as I know, two versions of Survivors featuring the songs with Bruce on vocals as a bonus: the one you have (that omits two - I had forgotten that) and the more complete release from 2001.

The AIR RAID releases were put together with not much attention to detail and merely trying to make the original albums available, just as they were first released. Thankfully that was rectified with the Sanctuary re-releases with added bonus material, which are much more interesting.

Forostar said:
What I remember from these bonus tracks (I downloaded them once, not sure on which album they landed) is that he sounds terribly offkey.
Click to expand...

You are probably referring to the bonus tracks for the Live at Reading '81; they were recorded during a rehearsal for the show when they were testing some newly written material.

The Survivors songs with Bruce on vocals were properly recorded as the intention was to re-release the album with Bruce in 1980. That did never materialise though.

The bonus tracks for Head On (Angel with a Machine Gun and Kingsway Jam) are, at best, demo material, the latter in particular. On the other hand, the bonus tracks for Shock Tactics (Little Big Man, Pyramid to the Stars, Losing my Grip) sound great as they were produced by Tony Platt (I seem to remember for a tentative single).

Please tell me Bruce doesn't have a writing credit on this track!

srfc said:
Please tell me Bruce doesn't have a writing credit on this track!
Click to expand...

I read this to the tune of "For The Greater Good Of God".

srfc said:
Please tell me Bruce doesn't have a writing credit on this track!
Click to expand...

Nope. All the material from Survivors was written and recorded before joined Samson.

lira said:
5) Savage is the english version of Marché Ou Creve and can be considered another album as Trust rerecord everything.
Click to expand...

@lira I do not think this is true. The drums sound and are exactly the same. Just listen e.g. to

The Big Illusion on Savage: