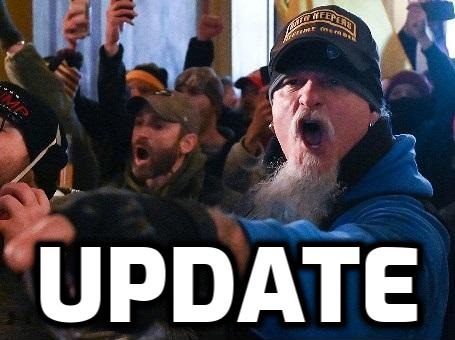 I’m sorry but... “Gettysburg” as a whole might take the win for me, but without “Hold at All Costs” and “High Water Mark” it can’t stand a chance against the most monumental epic of the Barlow era. “Dante’s Inferno”.

“Dante’s Inferno” embodies the same pros and cons as most Iseditionist Earth songs — nice guitar work and some cool thrashy riffage, half strong and half hammy vocals, and consistently weak songwriting that comes off like a ransom note of unrelated parts pasted together without a common through line. I started checking the clock with some frequency about halfway through, because this thing wasn’t really going anywhere, despite having a number of nice sections along the way. Doesn’t really merit its runtime — I think everything it had to say musically could have been wrapped up in 6 or 7 minutes. Not bad, though.

“The Devil To Pay” is more of a departure from the usual IE tropes, and mostly in a good way. The songwriting is actually pretty coherent here for a change, with a clear journey from beginning to end. The incorporation of the U.S. national anthem and “When Johnny Comes Marching Home” both work well, as do the rolling snare drum, and the cannon fire and other effects. Ripper sounds pretty good on the first round of the verse, but when he gets into the second round and goes all shrieky he sounds a bit ridiculous. The group vocal chorus works much better, and is actually pretty catchy, though I have to say the first lyric sounded like “miscegeny and what it brings” to me instead of “this tragedy…”, which put a very different spin on the song! On the negative side, the guitar work here isn’t as interesting as on “Dante’s Inferno”, and the synth strings don’t sound particularly great either. But the song never bored me, and it felt like it earned its runtime.

In the end I have to go with the better-written and more memorable song here. Sorry, The-Petroleum-Product-Who-Must-Not-Be-Named, but @LooseCannon ’s nominee takes this one. Winner: Iseditionist Earth - “The Devil To Pay”

In honor of it being Memorial Day today I'll throw a sympathy vote to The Devil to Pay.

I'm going to give the opposing song a chance, though. Don't see myself being swayed, really, but I'm gonna be fair.

Staff member
Dante's Inferno with zero doubt. It's just better in every way. The Devil To Pay is the weakest song of the trilogy. Maybe I'd have a slight doubt if it was Hold At All Costs or High Water Mark.

“Gettysburg” should’ve just been included as one song, and the criteria bumped up to 32 minutes lol. TDTP is great, but not so much on its own. I can’t listen to one of those songs without the rest.

This Ayreon song is a weird theatrical mash-up of Bowie, Styx, and Genesis with occasional dabs of death metal. It’s definitely unique, and I can see how someone might like it a lot if it were up their alley, but I would not appear to be the target audience for this song. To me it’s overwrought and more focused on the theater than on the music. It’s not bad, but it’s not something that I would ever be likely to warm up to.

Meanwhile, this Devin Townsend song is also not really my cup of tea. He does his vaguely proggy, industrial shouty thing in the way you’d expect. The track is consistently interesting, and the chorus is pretty cool, but I don’t know that I’d ever want to sit down and listen to this just for enjoyment’s sake.

Both tracks have their merits, but I’m not personally thrilled with either one. Forced to choose, I guess I have to say sorry, @Night Prowler, but @Mosh ‘s nominee is closer to my own taste. Winner: Devin Townsend

I normally like Ayreon, but they're often hit or miss. This was a miss for me. I certainly hope The Day That the World Breaks Down was nominated; that song (and The Source as an album) is absolutely killer.


...and then we have Devin, which is slightly stronger but also a miss for me. I'm with @Jer on this one; neither of these tracks are my cup of tea. I went with Devin because I liked the chaotic sound during parts of the song.

I love both artists, but neither of these songs is among my favourites in their respective discographies. I'm gonna have to think about it a bit more, I really don't know how to vote.

Staff member
I'm definitely biased because Ayreon is my favorite band/project and The Human Equation one of my favorite albums, but I like Trauma waaaaaay waaaaaaaay more. It has insane vocal cast, goes through many different moods and sections without losing its way and is just epic af. Arjen rarely does stuff with harsh vocals but every single instance that he did it is super memorable, and this is by far the best one. I will admit that maybe this song doesn't work as well out of context from the rest of the album.

Planet Of The Apes is cool, but is way too long and tedious to listen to too much. It's not as big of an offender with that as, for example, The Great Masturbator from that same album, but it's still way too long and random for its own good. Until 06:35 it's a pretty good song, but afterwards it completely loses me.

Also going with Trauma, for the same reasons as NP.

No offense to Overkill, but I do not even have to listen to them here.

The Moor is a masterpiece, probably top 10 Opeth.

I'm surely in the minority since The Moor is one of my least favorite tracks from Still Life, but it's still a good song that wipes the floor with Overkill.

This Opeth track has sublime music and pretty strong clean vocals, but shit-horrible extreme vocals. It almost makes it worse that the song has some clean vocals in it, because you can hear what it might have been if it had stayed clean throughout. Oh well.

This Overkill track is mostly plodding, repetitive Sabbath worship with a handful of parts that have some life. The vocals aren’t great, but they’re far better than Akerfeldt’s growls. That said, I was constantly checking the clock on this one, and I didn’t feel like it had much to say musically. Definitely didn’t earn its runtime.

Sorry, @Dityn DJ James, but Collidnight’s nominee takes this one in a walk. Winner: Opeth

MrKnickerbocker said:
The Moor is a masterpiece, probably top 10 Opeth.
Click to expand...