I have searched the forum and not been able to find a thread about this great Welsh band. Does anyone here like their music? I am a bit of a latecomer; having listened to some of their earlier albums back in the 90s I kind of lost contact with them and I am now trying to catch up.

I really love this riff:


Here's a great gig by them from 2015, playing one of their best albums in its entirety, followed by a selection of classics and rarities:

By the way, I take my hat off to a band capable of doing things like this: 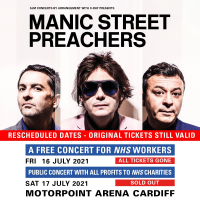 I loved this song when it came out. I forgot about it since and it crossed my mind in last year. The song still rocks

Motorcycle Emptiness is a great song, I play it from time to time. Haven’t looked into the rest of their music, though.

Yeah I remember this band from the 90's. They have been one of those bands that they didn't fit anywhere in the British fashion streaming of that time. They always have been a band in the shadows. At that time Blur and Oasis get all the media attention along with Suede, Pulp and that band that were no.1 coping an extract of Rolling Stones track (I don't remember the name of that band). I think Manic Street Preachers released 2 albums (the second was a double album with motorcycle emptiness I think) and I think they had a problem with a member of the band who disappeared, and I think the band quit and they came back 10 or 15 years ago with a couple of albums but they are a different rock band like could be Supergrass who I like it a lot. Great band yes, thanks for create this thread.

It must be the only song to reach the #1 spot inspired by the (inspirational) International Brigades!

This was a pleasant surprise. Really good stuff with particularly nice vocals. Haven't heard about them until now.

Staff member
I haven't checked out that much of them, but I like quite a few songs. Apart from the ones already posted:

Motorcycle Emptiness is one of the greatest songs of the 90´s. Love that melancholic riff!
Hard to believe this band also made the saltless boring If You Tolerate This...

My sister was a fan back in the day so I'm kind of familiar with those 90's albums, if I recall correctly "Gold Against the Soul" had some almost Maiden-ish melodies on a lot of it.

So great to hear that song without Axl singing it! Thanks for sharing the video.

They also did a very good cover of a fantastic oldie by the Rolling Stones, one of my dad’s favourites (I will always be grateful to my dad for my musical upbringing and lots of other things):

srfc said:
My sister was a fan back in the day so I'm kind of familiar with those 90's albums, if I recall correctly "Gold Against the Soul" had some almost Maiden-ish melodies on a lot of it.
Click to expand...

James Dean Bradfield probably likes some Maiden. This is what he said about Life Becoming a Landslide:

“I was trying to mix Iron Maiden and The Clash’s version of ‘Armagideon Time’.”

Wow, I didn't know that the maideny bits were on purpose.

Thread bumped with a festival performance to celebrate that the band would apparently be announcing more details about their 14th studio album tomorrow.