Why are so many people hating on Man of Sorrows? Its a bit different for a Maiden song, I admit, but the bridge riffs and lead part

I pride myself on having heard every Iron Maiden song, (though some I REALLY wish I didnt bother with) but beyond that, I'm not as sharp as some of you here with memory of the ones I dont listen to regularly. So I'll sit the main part of this out. Besides, I think most people can guess the ones I really dont like anyways.

Can I play with maggots. lol Oh come on, its not that bad. But yeah it is poppy as all hell. I have a memory with that song you might find entertaining. My little cousin used to run around when he was young, trying to sing 'I think I can has crap ass' while farting. Very much to the great annoyance of his parents. Unfortunately, I was the one who gave him that cd. So guess what? I wasn't allowed to buy or gift him any more until he was 11. xD Though, in my defense, I only gave him the tune, he got the rest of that s41t from the internet.

Most of the songs I listed as “least favorite” are still amazing 10/10 songs to me. I’m strictly picking based on which songs I’d rank higher. Man of Sorrows is a fantastic song.

chaosapiant said:
Man of Sorrows is a fantastic song.
Click to expand...

ah-ha! Thank you! I knew I couldnt be alone there. lol

Nyx said:
ah-ha! Thank you! I knew I couldnt be alone there. lol
Click to expand...

Nope, you are correct. There’s this sort of lurching/dragging/chugging quality to the riffs I quite enjoy. It doesn’t sound like anything typically Maiden-esque.
C

srfc said:
Prowler
Another Life
Invaders
Quest for Fire
Losfer Words
Deja Vu
The Prophecy
The Assassin
The Fugitive
2 Am
Don't Look to the Eyes of a Stranger
The Nomad
Age of Innocence
Different World
Mother of Mercy
The Man of Sorrows
Click to expand...

An update to this.

Replace the Assassin with Mother Russia.

Not sure 100% on Senjutsu but as of right now, it's Lost in a Lost World. Senjutsu ran it close. I stand to be corrected when we hear some live versions, hopefully the whole record at some stage.

) New Frontier
The Pilgrim
(The

) Mother of Mercy
The Man of Sorrows
(The

Running Free (this song is so overrated, imo)
Another Life (really repetitive)
Invaders (Gangland at least has that cool harmony)
Quest for Fire (In the time when dinosaurs took a snoozefest)
2 Minutes to Midnight (it’s really overdone at this point, and if anything’s gotta be weak on this album…)
Deja-Vu (if it’s gonna be anything, it’s this by such a thin margin)
Only the Good Die Young (for the ending to a concept album, this adds nothing to it’s story)
Holy Smoke (never really got into this one)
The Apparition (Bruce’s worst song by FAR)
Look for the Truth (The only one that doesn’t spring to mind)
The Angel and the Gambler ()
The Fallen Angel (if it’s gonna be anything)
The Age of Innocence (kinda bland)
Reincarnation of Benjamin Breeg (bit too long for what it is)
Mother of Mercy (some really odd and distracting production in parts of this one)
The Man of Sorrows (it’s great, but also kinda not the strongest on this album of greats)
Darkest Hour (kinda wish this was anywhere else on the album. Being the disc 2 opener is a really odd choice)

MindRuler said:
Contains one of my alltime favourite Maiden guitarsolo's
Click to expand...

In a short interview during TNOTB era (I guess) Adrian called his solo in this song the most memorable solo on record... ''because it turned out exactly how I wanted it to''.

His solos are always memorable. He has other great solos in the Killers album (Drifter, the title track, Innocent Exile, The Ides Of March) and even more in TNOTB album (every solo without the one in Gangland, because it's too short).

Edit: the suit he wore during TNOTB tour was an ''interesting'' choice! He didn't wear it during the whole tour, if I'm not mistaken. 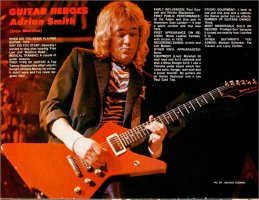 Iron Maiden - Iron Maiden
Killers - Drifter
The Number of The Beast - Invaders
Piece of Mind - Quest for Fire
Powerslave - Back in The Village (that was a hard choice)
Somewhere in Time - Sea of Madness
Seventh Son of A Seventh Son - Can I Play With Madness?
No Prayer For the Dying - The Assassin
Fear of the Dark - The Apparition
The X Factor - Fortunes of War
Virtual XI - Don't Look to the Eyes of a Stranger
Brave New World - The Fallen Angel
Dance of Death - Age of Innocence
A Matter of Life & Death - The Pilgrim
The Final Frontier - Mother of Mercy
The Book of Souls - When the River Runs Deep
Senjutsu - Death of the Celts
You must log in or register to reply here.
Share:
Facebook Twitter Reddit Pinterest Tumblr WhatsApp Email Share Link
Top