Top 10 Albums by The Big Four

LooseCannon said:
7. The System Has Failed (I know it's bad but emotional attachment)
Click to expand...

I would have the entire 2004-09 Megadeth album streak on my list.

If Testament were thrown in the mix things would have been much better, untill then I would also say that the Megadeth albums are the most consistent

In terms of sales and popularity, the Big Four should be:

Metallica is in a league all their own and vastly surpasses all of these bands when talking about popularity. They're the Supreme One.
H

Master of Puppets
Ride the Lightning
...And Justice For All
Rust in Peace
Peace Sells...But Who's Buying?
Countdown to Extinction
So Far..So Good...So What?
South of Heaven
Seasons in the Abyss
Persistence of Time

The way I see it they had to "manually circumvent" the fact that others are in natural position of a support group. So they name it "big 4".
The name is very resonant and it was a great PR tool - it instantly sparked a lot of discussion which can only be good for marketing.

But is it truly big four? Historically yes, actually no. Because at that point three weren't thrash bands, and it wasn't a thrash metal show.

Also, re: Anthrax’s inclusion, they were always the first band to play with the shortest set and probably got pretty far back then by claiming the first use of the phrase “thrash”.
J

Also, they represent that distinct, moshing, punkish sound that is quite different from the rest of the 4.


Zare said:
But is it truly big four? Historically yes
Click to expand...

and there's it. That's why it is so. Historical importance combined with sales and representation of different approaches to the genre, which I personally find great.

(Also just for the record, I wouldn't ever replace Anthrax, certainly not for Testament or Exodus. Like, maybe Coroner or Dark Angel (or Death Angel), but Thrax are great, especially because they - at least in the early years - never took themselves that seriously, making them more palatable for anyone who doesn't need it "tr00")

Personally, I wouldn't ever, ever include Slayer, because they make my ears bleed (and e.g. every one of the main Teutonic thrash bands beats them to dust, even Tankard), but I respect they're there, because they represent the brutal thrash subgenre that was bettered by other bands (Kreator, definitely) and then with the aid of Possessed turned into that early, thrashy death metal (see Cannibal Corpse's debut for IMHO a great example of that sound). Though Possessed got in quite early, so I don't get why they aren't in the Big 4, it's probably because of sales. Sadus - again, probably because they sold less than Slayer, IIRC. Also, Morbid Saint would fit as well, but there it's probably because of the significant lack of output.
Last edited: Sep 21, 2021

The big four is the big four because they were the first ones signed to major labels.
M

Jer said:
I’ve often wondered the same, but I would ask the same question about Slayer as well.
Click to expand...

Of all those band I don't like Slayer, they just sound like noise to me. Especially from Reign in Blood onwards.
But I think Metallica is the least deserving in the Big 4 of thrash especially since they haven't done any thrash albums in the last 30 years. AJFA was their last thrash album.

Death Magnetic is a thrash album for sure.

Sorry, Magnus The (Cigarette)nus, but Slayer is (happy)er than Liberace counting Fibonacci while playing the gimp to a simp who’s a limp pimp.

Jer said:
Sorry, Magnus The (Cigarette)nus, but Slayer is (happy)er than Liberace counting Fibonacci while playing the gimp to a simp who’s a limp pimp.
Click to expand...

And I got no alert for this message at all! Conspiracy!!!!

Trying to put a proper order to my top (apart from number 1 it varies):

KidInTheDark666 said:
The System Has Failed is awesome, guys. I actually just got it on vinyl.
Click to expand...

TSHF is an amazing album and United Abominations is really good. But Endgame??? Man, hands down my #3 favorite Megadeth record of all time (even above Peace Sells...). Nevertheless, and despite their quality, none of these record enters my "big 4 top 10". Just because there's a lot of of great stuff these 4 bands released. And some of it has to be left out (The most blatant cases besides Endgame and TSHF are Ride The Lightning, Spreading The Disease, State Of Euphoria,Hell Awaits, Christ Illusion or as I mentioned Peace Sells).

WildRanger said:
I'm not a Slayer thrash fan at all, but I like Seasons in the Abysslayer.
Click to expand...

I've probably less than 10 other thrash records.
Usually the vocals are not to my liking (non clean vocal wise I prefer the ones used in death and black metal).

Actually 5 out of my top ten thrash albums aren't even from the "big 4": Voivod's Dimension Hatross and Killing Technology are surely there, so does Kreator's Coma Of Souls, Testament's Low is a must include in my book and without shadow of doubt I'll go with Sabbat's History Of A Time To Come (actually at #2 only below Reign In Blood). And even then there are records such as The Haunted's rEVOLVEr, Testament's The New Order, Overkill's The Years Of Decay, Kreator's Violent Revolution, Sabbat's Dreamweaver and Sodom's Agent Orange that are at the gates and every given day may climb up to the top ten. 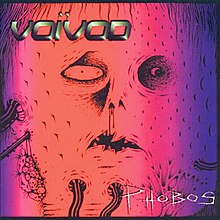 Tied with Dimension Hatross and Killing Technology as my favorite Voivod album: a true masterpiece. I simply adore this record... Hugely underrated IMO. But I wouldn't call it Thrash per se. I don't even know how to label it... all I know it's psychedelic, dissonant, prog and heavy as hell. Not a single bad song. One of the best metal records from the 90's.. truly unique
You must log in or register to reply here.
Share:
Facebook Twitter Reddit Pinterest Tumblr WhatsApp Email Share Link
Top