If I vote W.A.S.P. Judas will say I only did because of this:

JudasMyGuide said:
Achilles and if it's seriously going to lose against fuckin' WASP I think I'm gonna take a break from the forum altogether already.
Click to expand...

Achilles Last Stand is very pleasant sounding, and has a great solo, but the song is not very well written and doesn't wow me. Kind of the way I feel about most Zep I've heard. There's nothing epic about this, it's too repetitive and there's no journey, and well, the evolution of a song is what defines an epic for me.

The Great Misconceptions of Me, on the other hand, is a classic example of an epic. Sure being the finale of a story driven album helps, but it evolves, changes, and is refreshing throughout. Great sound and the vocals have much more impact than Zep's. Surprisingly good considering how crap The Headless Children and The Last Command were.

Staff member
Aaaand crap, I didn't vote in time. Probably for the best or it would have been tied.

Results of Round 3:
W.A.S.P. - The Great Misconceptions Of Me
Led Zeppelin - Achilles Last Stand

I see you, @Night Prowler . 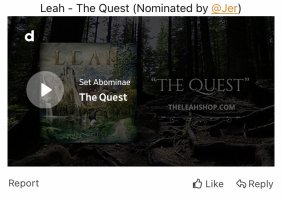 This Blind Guardian track took one too many trips to the musical buffet — it’s bloated and overloaded with too many disparate parts that don’t jell well as a song. It’s gratuitously theatrical, to an extent that I find offputting, and I don’t care for some of the synth orchestration choices or the super-thin, video gamey lead guitar sound. That said, there are some cool parts to this track, like 2:30-5:00, 7:40-8:40, and 11:22 to the end. But that still leaves multiple sections of multiple minutes that aren’t all that great, and I found myself checking the clock at several points during the song.

Then we have “The Quest”, the title track from Leah’s third full-length album, and it’s a master class in how to do epic symphonic folk metal. Blending the styles of Enya and Evanescence, Leah builds a dynamic, exotic roller coaster that takes you from moments of calm vulnerability to full-on melodic aggression and everywhere in between. Lush and unusual vocal harmonies combine with folk instrumentation and crunchy guitars to take you on a long but coherent journey, earning every bit of its runtime. Leah’s voice can feel a little thin at times, but there isn’t much else to nitpick in this song. And, oh yeah, it was my own nominee.

Staff member
Blind Guardian do have some nice bits in there, but lots and lots and lots stuff going on betweentimes that they could really just get rid off. So disjointed.

I'm not a great fan of Leah's entry either. Vocals are just that little bit too soft for metal IMO, even for someone who will happily listen to Anneke whatsername. It's all a bit Galadriel for my liking, and while it hints at poignant and mysterious, which sounds really good it has too much warm, sunny and synthetic for my liking.

Going towards to the Blind Guardian side

Diesel 11 said:
Really? I mean, I understand liking one song over the other, but are you not able to at least appreciate the artist value of “The Great Misconceptions Of Me”?

This ain’t the W.A.S.P. of the “I FUCK LIKE A BEAST” days. This is a W.A.S.P. that has tried to move past its youthful inanity* and evolve into something more mature. You can really tell that The Crimson Idol came from something deep within Blackie Lawless. I mean, fuck man, it’s about a boy whose parents only care about what he could be, not who he is. He puts his passion in his guitar and just wants to be accepted, and gets that chance from a money hungry record executive who propels him to stardom. He engages in the rock star life — sex and drums drugs and rock n roll — but even as he gets exactly what he thought he wanted, he realizes that what he really needed was just to be loved for who he is. And it’s too late.

“The Great Misconceptions Of Me” is a summation of the guy’s life, and to that end, Blackie throws in a lot of motifs and lyrics from previous songs to really make it as if his life is flashing before his eyes. That altered chorus from “The Idol” that opens the song hits so hard. People don’t give Blackie enough credit; sure he’s imperfect and very rough but his voice has a lot of bite and actually a ton of emotion too. The chorus (reprised from “The Invisible Boy”, which also reappears later on) is really really good, really showcasing what was missing all that time. Near the end the guitarist literally hangs himself with his own guitar strings, a darkly poetic ending to a tragic existence.

This is a song that must’ve sprung from personal experience and I wouldn’t be surprised if writing out something this vivid helped Blackie Lawless down the road mentally. Sure the band eventually reverted back to being just... aggressive, but this album showcased a whole other side only hinted at by The Headless Children. Compare it to “Achilles Last Stand”, which is some groovy proto-metal and has its moments, but by the end I’m just checking the time to see how much more there is. And to be clear: I used to listen to Zeppelin a lot, and I like a good chunk of their material, but “Achilles” never did it for me and I probably like it more now than I ever have. Maybe if “Kashmir” was here instead I’d have a tougher time voting. But there’s just no real soul in that song. Its competitor, meanwhile, is all soul. And it’s powerful.

The Great Misconceptions Of Me.

*Even though I do like that, but chalk that up to me digging hair metal in general. They did have bite though.
Click to expand...

I'll give you this - as far as WASP goes, this song (and indeed the whole album) is definitely more tolerable than usual. But no, it still doesn't work for me. It's still too 80's, too melodramatic, too generic, even. In fact, I wonder whether the "deep" pretentions combined with WASP's general approach and sound doesn't make it even more intolerable, of sorts. I don't care enough about them for the story to have any significant impact on me (on the contrary) and musically it's just mostly pedestrian.
Maybe it's just an allergic reaction for vaguely 80's sounding, run of the mill, "deep" hard rock/metal stuff that got really popular here in my country during the previous regime and right after the revolution. Our version of "Dad rock", I guess?
Fall of the Peacemakers this is definitely not.


Compared with Achilles, which demonstrates why people loved and still love Zeppelin. And mind you, I still really, really, really don't like Plant. But the interplay with the rhythm section, the drowsy, psychedelic riffing right before the sixth minute, the ascending "chorus" of sorts and most of all, the solos - no other band in the seventies had it quite so smooth. Kashmir is great, but it kinda starts to drag near the end, which this beast with all of its energy never does.

And for the record, voting for Leah. I am a huge fan of bombast and megalomania, but this time around, some subtlety and gentleness is very much appreciated. Dunno, this is what I hoped the last Nightwish album would sound like.

Staff member
And Then There Was Silence is everything I love about Blind Guardian. Bombast, hallelujah, ridiculousness, power. And I love Blind Guardian.

I really enjoyed the song by Leah as well. I'm voting BG due to bias, but really, gonna go listen to more Leah soon.

LooseCannon said:
And Then There Was Silence is everything I love about Blind Guardian. Bombast, hallelujah, ridiculousness, power.
Click to expand...

Staff member
I’ll check out the Leah song for the sake of new music, but BG is going to be very hard to beat.

Get your ears checked, please.

LooseCannon said:
Get your ears checked, please.
Click to expand...

Maybe it'll get better when I listen with headphones instead of computer speakers.

Midnight said:
Maybe it'll get better when I listen with headphones instead of computer speakers.
Click to expand...

I quite appreciate both of these epics.

Blind Guardian throw the fuckin’ kitchen sink into “And Then There Was Silence”. There is so much happening in this song, it gets hard to wrap your head around all the shifts and changes they throw into these fourteen minutes. Yet it is never boring and never tiresome. I have two critiques about this song: firstly, the guitars here sound great! My issue is the production itself. With so much happening all at once, it would’ve benefited from a clearer mix. Secondly, I think they should’ve come back to the quiet section near the end to really bring it home. Other than that, great song. Very Blind Guardian, very cool.

Leah, on the other hand, really lets things build up and progress more slowly than BG do. The best way I can put it is that this song sounds like a sleepier Nightwish. That’s not a criticism. I like a lot of aspects on display here (although the main melody seems to be very Alestorm-y) but I don’t think this is a song I would come back to all that much, whereas Blind Guardian’s over-the-top approach means I’m more likely to go back and really just explore the world they’re creating. So with that in mind...