Jadukor said:
I have a noob question on what solo writing credits mean for a Bassist like Steve?
Click to expand...

Formal credits technically only cover melody and lyrics. Arrangements, solos, etc., could be contributed by anyone.

Zare said:
If you're talking about lead parts like Trooper main melody, that's Steve. From what he know he whisles this stuff out while playing the roots on the bass. If you're talking small texturing like Smith does on Trooper chorus, or a lot of it on CSiT chorus, I really can't know. Maybe it's his original idea maybe guitarist came up with it in preproduction jam.

For me weirder is Powerslave solo Dickinson credit, because the only way he could've conveyed that instrumental section is by reffering to another songs (like he asked Nicko to do 'the thing' from Pat Travers track) and ask Dave and H to pull up something akin to that. And we know there are different takes around (the Iron Curtain video), so solos were developed as opposed to improvised over a chord sequence Bruce set there. For me it is utterly stupid to not credit guitarists for those solos, but it's likely that the harmony section in between H's and Dave's second solo was simply sang out by Bruce. That line has his phrasing written all over.
Click to expand...

I recall reading that Powerslave was 2 or 3 Bruce songs combined into one that Steve helped with, as for solos guitarists often dont get song credits just for laying one down, thats not exclusive to Maiden

You'd have a number of forum members telling you how great it is, and what an idiot you are for not appreciating its novelty, boldness, and band evolution. "Play classics" and "Powerslave2" might have been mentioned as well.

Not yet sure if I will buy the regular super deluxe or the wooden FC boxset.

Jer said:
Formal credits technically only cover melody and lyrics. Arrangements, solos, etc., could be contributed by anyone.
Click to expand...

This is the legal explanation that holds up in court. If any band wants to divide differently, it's up to them to register the songwriters.

Jer said:
Creative tensions are what led Adrian to quit in the lead-up to NPFTD. There are plenty of stories of Martin Birch pushing to get things just right, like having Bruce redo the scream in TNOTB umpteen times, well past the point where he wanted to keep doing it. You yourself bring up citations of creative arguments and jockeying between Bruce and Steve in those earlier years. Back when album sales were paying the bills, many of the band’s biggest singles during that golden period were heavily influenced if not completely written by Bruce and/or Adrian. There were clearly a lot of cooks in the kitchen, all pushing to make the best product they could.
Click to expand...

I'm totally willing to accept Martin Birch pushing for good performances, he's not nicknamed the Taskmaster in one of the album sleeves for nothing and we've got plenty of stories about that. It's just that other than that, we've got stories of Bruce and Steve butting heads all the time and not really much else. Flight of Icarus wasn't played for 33 years because they couldn't agree on the tempo. That, to me, doesn't sound like a band that was making compromises internally during that time period. Adrian leaving the band due to creative tensions isn't because he was disagreeing over the choruses in Steve's songs (which were already starting to get repetitive in the 80s as of SiT and SSOASS anyway, note) or something similar, it's because the rest of the band was doing a 180 in terms of musical style.

Re: creative space, I feel like what they really meant with that is that for the better part of the reunion era, Steve involved himself in just about every song on the albums so that he could mold them to his liking and find those compromises they didn't care to make in the 80s. I don't think anywhere it's even been suggested that Steve was interested in compromising in songs he personally wrote now or previously. If anything, it feels like most of the compromising came from Bruce and Adrian, who let Steve muck about with their joint compositions starting with the reunion era. Not that it was a new thing, but it still took until TBOS to get Smith/Dickinson only tracks after Hooks in You. 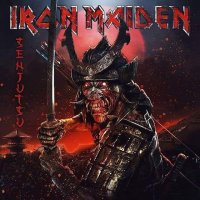 Jer said:
Formal credits technically only cover melody and lyrics. Arrangements, solos, etc., could be contributed by anyone.
Click to expand...

I understand it's an official rule... But I can't help but think it's a little unfair. Especially in Rock/Hard/Metal and variations...

I understand that without the "main song" maybe I would never have access to the solos section... But isn't it a little unfair for soloists not to be listed as songwriters even as "honorable mention"??

edit: I believe Deep Purple always credits all the band members. Also Van Halen most of the time.

waspfan said:
I understand it's an official rule... But I can't help but think it's a little unfair. Especially in Rock/Hard/Metal and variations...
Click to expand...

Totally agreed. A lot of times the riffs and solos are equally or even more important than the core melody and lyrics. Song arrangements make a huge difference, too. But the rules are the rules, I guess.

I always found it interesting that arrangements are in a bit of weird position in the US and UK (probably in other countries too) where they can be counted as part of the songwriting process and given due credit, or then not. Here arrangements are a specifically credited contribution with their own rules governing them. Tabs and whatnot will specify composer, arranger and lyricist if those are different (sets of) people and I think it's way more fair and transparent that way.

e: I don't particularly think solos need specific credit unless they're integral to the song (think the whole massive lead bass section in Metallica's The Call of Ktulu, for instance), similar to how drum beats aren't considered creditable by themselves unless they're they form the whole song or basically make it what it is. Maiden's done that with Gangland, I believe and there's an argument to be made some of Nicko's contributions should've counted for that too.

I think arangements are traditionally counted more towards the performance of a piece rather than the writing of it. After all, you can re-arrange pieces easily to perform them in different settings.

A song is no more and no less than what someone can perform by themselves with vocals and a lone instrument (piano or guitar).

The rules need to apply to many different types of muscial genres, be easily understood and be legally applicable as well.

The Predator style background music in the pre-order promo... is it the intro to Senjutsu or Stratego? Any predictions?
L

I feel old when I see the posts that say things like “I was 12 when I heard Maiden for the first time in 2002”
Damn I was 12 when I saw the original Star Wars…at the theatre. Lol.

Jadukor said:
2000 to me somehow always feels like a decade ago and yet it's been 21 years
Click to expand...

Exactly. Remember the whole Y2K thing....oh all the computers are gona go kaput....its the end

Good to know I'm in the right place. I'm 47 in December. Still younger than you guys

. The 80's were the best. Every Xmas was Star Wars and Transformers shit. Good times.

Jer said:
Totally agreed. A lot of times the riffs and solos are equally or even more important than the core melody and lyrics. Song arrangements make a huge difference, too. But the rules are the rules, I guess.
Click to expand...

Famous case, the guitar player from the Police has no credit on Every Breath You Take despite his riff being the hook of the song.

The_7th_one said:
I hope the photoshopped picture won't be the official picture that comes with the album.
Click to expand...